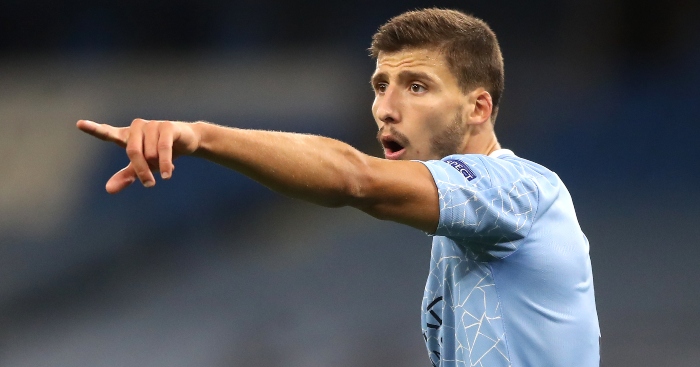 Manchester City‘s improved recent form has been largely down to the defensive prowess of Ruben Dias – the Vincent Kompany replacement that is showing there is such a thing as a £60million bargain.

After Kompany’s departure in 2019, City have floundered. The defence of their Premier League title was feeble, no matter how impressive Liverpool were for most of last season. With the Belgium international gone, Pep Guardiola’s side found both consistency and defensive stability hard to come by as they finished a distant second.

The trend looked set to continue this year. Leicester came to the Etihad and delivered a 5-2 thrashing, while draws against the likes of Leeds and West Ham saw City written off by almost everybody.

But Dias is making those assumptions look extremely premature. It can be argued that Guardiola has tweaked his tactics this season, playing two defensive midfielders and taking less risks in possession than we’ve come to expect from a Pep-managed side.

Yet Dias holds all the attributes of an elite centre-back, exuding authority and calmness while acting as a vocal presence in the heart of City’s defence. Rumour has it the 23-year-old moonlights as an air-traffic controller in his spare time, such is the nature of his booming octaves.

Dias also stands out because he clearly relishes the art of defending. Tackles, blocks and clearances are all the motivation the Portugal international needs to get out of bed on cold winter mornings. Given Guardiola’s habit of placing ball-playing midfielders in defence, Dias is almost a throwback to simpler times.

This tackle by Ruben Dias last night was the pick of the bunch for me. Wow #ManCity #MCFC pic.twitter.com/861EtfPaDr

Scott McTominay discovered this to his cost during the League Cup semi-final. As City gradually tightened the screw on their fierce rivals, United were restricted to hopeful counter-attacks as the game wore on.

When McTominay received the ball on the edge of the City area, he began dancing forward like a businessman realising he’s left his brolly on the train.

Dias read the midfielder’s intentions as if thumbing through a well-worn paperback. Committing himself early, the centre-back spread his earth-prone body and whisked the ball away from the advancing McTominay.

City went on to win the tie 2-0, with Dias winning 100% of his defensive duels. His blossoming partnership with John Stones has seen the concession of only one goal in over 900 minutes of football.

Guardiola was full of praise for the role sporting director Txiki Begiristain played in convincing Dias to sign from Benfica last summer. Speaking to City’s official website, he said: “Ruben lives with football 24 hours and he is giving us something special.

“Congrats to Txiki and the club for bringing this player here because he will be outstanding for many years to come.”

In this most unpredictable of seasons, the discovery of their new Vincent Kompany may just give City the edge over the rivals.

Where are they now? Both Xls from Man Utd & City’s 2010 League Cup semi

Can you name the top 15 goalscorers in Premier League Manchester derbies?