Shawcross, Bale, Brass, Walters & the eternal comedy of own goals in football 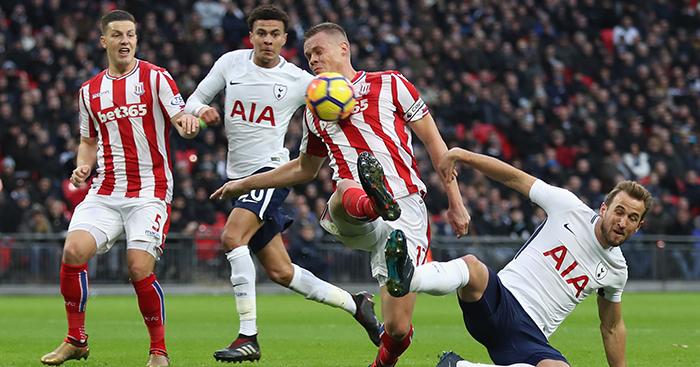 When writing comedy, there are certain things which will always hit the spot.

A person walking into a lamppost? Gold, every single time.

Someone sitting back down when their seat has been pulled away from them and collapsing in a heap on the floor? Can’t go wrong.

‘Stop hitting yourself’? A stone-cold classic.

Football has its equivalents, too. Its unscripted nature should give you less to work with, but anyone who has watched the sport regularly will know it doesn’t quite work that way.

Some classics of the genre include Phil Babb sliding balls-first into a goalpost, or indeed any incident of a man getting hit in the groin with a foreign object.

Few things come close to that in all honesty, but own goals have the benefit of at least appearing more frequently.

The funniest examples are those combining physical pain and the mental anguish of putting through your own net.

Chris Brass set the gold standard, breaking his own nose while notching an OG, but it has happened at a higher level too.

Take this example from one-time most expensive player in world football Gareth Bale.

The latest in the genre

Fortunately, to bring in a well-trodden football cliché, these things have a way of evening themselves out.

And while Bale may have long since moved on, Spurs were the beneficiaries in their 5-1 victory over Stoke City.

For large parts of the game, the home side were stopped in their tracks by an in-form Jack Butland in the Potters’ goal, with the 25-year-old staking a claim to surpass Joe Hart as England’s number one.

Butland produced save after save throughout the first 50 minutes, with no Spurs player able to find a way past him.

He did concede in that period, though, and it was all down to one of his team-mates. Well, two of them, if you want to get technical about it.

As soon as Heung-min Son’s cross flicks up off the boot of Kurt Zouma, Ryan Shawcross knows exactly what’s up.

He can see the trajectory of the ball, just as Babb could see the white of the goalposts drawing closer by the second, and he knows he needs to twist his body into a shape it has never taken before if he wants to avoid the inevitable.

Perhaps a younger Shawcross could have managed it, but the older you get the harder it becomes to learn new things. Not only has the reaction speed diminished, but the physical capability to act on the brain’s impulses is doing the same.

If you’ve ever watched Home Alone, you’ll know where I’m coming from here: Macaulay Culkin’s Kevin might be fleet-of-foot enough to escape the burglars’ clutches, but no amount of experience on their part will let them escape traps made more effective by their own sloppy reactions.

Back to the Shawcross OG, there’s something about an own-assist that makes an own goal that bit better. Don’t ask me how it works, it just does.

It might just be that the extra input makes it somehow doubly avoidable and doubly inevitable at once, despite that literally making no logical sense.

There’s a feeling that one piece of poor fortune increases the chances of a second, as if the goal of clearing the ball to safety moves further and further away with every microscopic movement.

As with Bale’s own goal all those years ago, there’s absolutely nothing Shawcross could have done about the situation short of detaching his head like he was made out of Lego.

But there’s only one thing funnier than the crushing inevitability of an own goal you see coming from a mile off and still can’t do anything about: the sort of own goal that everyone else sees coming apart from you.

Like Jamie Pollock’s famous effort, for example, which came just five years on from one of Matt Le Tissier’s best-loved strikes, a goal against Newcastle United which involved him lifting the ball over a defender and calmly slotting home.

As you may have figured out, though, Jamie Pollock is no Matt Le Tissier.

We may praise the own goal and own assist combo for its rarity as much as its comedy, but the solo own goal is an even rarer commodity.

The reason why is obvious enough: if you’re moving back towards your own goal, it tends to be because you’re doing all you can to remain in control, rather than risking running into trouble. You’re relatively calm, and unlikely to be panicked into doing something stupid. You can, however, be too calm.

As a goalkeeper, it’s hard to figure out how to react to such an own goal, but it may be even harder to get into the head of former Stoke goalkeeper Asmir Begovic back in January 2013.

On that occasion, team-mate Jonathan Walters headed into his own net not once but twice, as well as missing a penalty and kicking the ball into his own face.

The bizarre nature of it all can probably best be summed up by Frank Lampard’s reactions to the two goals: an embarrassed shrug for the first, followed by an actual celebration for the second, as if to say “Well if he’s going to keep doing this I’m at least going to properly enjoy it”.

See, Ryan, things can always be worse. It won’t be long until someone comes along with a more painful, more heartbreaking, or at the very least funnier own goal.