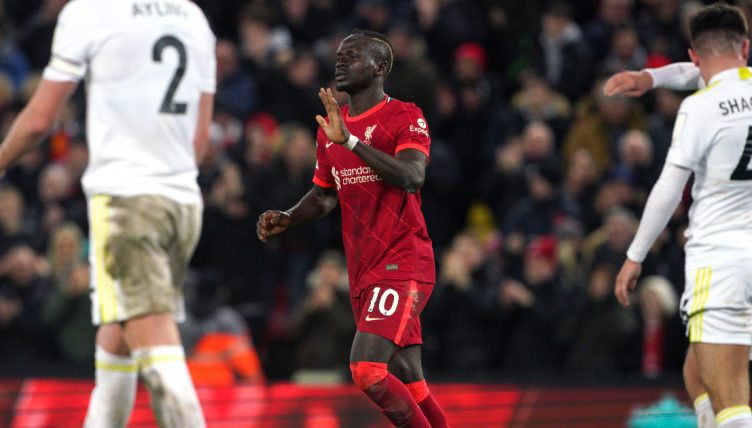 When Liverpool have needed a hero for the last five and a half years, they had super Sadio Mane to call upon.

Mane epitomises everything that is great about football.

Growing up in Senegal, pushing himself to become the best and eventually bringing home international glory, the winger has become immortal in his country and should be regarded as one of Liverpool and the Premier League’s all-time greats.

He’s a player who is an ideal fit for Jurgen Klopp’s high-pressing system, and whilst working hard in each game, he hasn’t succumbed to the bores of modern robotic football – playing with a similar skill, flair and desire to entertain as the likes of Ronaldinho from years before.

His brace in Liverpool’s 6-0 drubbing of Leeds on Wednesday night meant that he overtook Didier Drogba for Premier League goals, and he and his Liverpool team-mate Mohamed Salah are now the top-scoring Africans in the history of the competition.

Brace aside, it was a moment in the 88th minute, when already 4-0 up, which summed up Mane’s sheer brilliance.

Picking up the ball near the halfway line, the 29-year-old took a touch before completely bamboozling the Leeds defender behind him, sending a perfect backheel to the overlapping James Milner.

Mane seemed to have eyes on the back of his head when picking the pass out, and Liverpool fans were quick to notice the remarkable similarity between this move and one made by Steven Gerrard 14 years before.

The backheel for years has been a symbol of pure confidence on the pitch. To have not only the technique but the audacity to attempt a move is something only the best entertainers have – and Mane is arguably one of the best at it.

One of his finest Liverpool goals came against Watford in 2019, where he had the ball in the box but was facing the wrong way. The solution? Humiliate Ben Foster in goal with a backheel.

Steven Gerrard, as one of the biggest legends in Liverpool’s history, had clearly inspired Mane with his backheel against Arsenal in the Champions League in 2008, and this is not where the similarities end.

Like Gerrard before him, Mane has been integral to Liverpool’s success and, beyond his goals and ability, it is his mentality that has made him the perfect player for this current side both on and off the pitch.

The arrival of Luis Diaz in the January window for around £60million caused some to speculate that Mane would lose his starting spot. Mane has done the opposite: adapted.

A true team player adapts to the system his manager wants to play, and to the players around him.

When he plays with Diogo Jota or Roberto Firmino up front, Mane is a skilful winger who makes runs into the box to score.

When it’s Diaz, he’s the one who takes on the Firmino role as the forward who drops back and picks the ball up.

Instead of focusing on finishing chances, Mane has changed his game to receive the ball further back to create and link up with his team-mates while accommodating the new boy.

It is this willingness to learn, improve and change to help his team that makes him such a valuable asset.

The backheel was reminiscent of Gerrard, but so is Mane as a whole.

Salah may be the main man right now, but Mane is showing the leadership, maturity and just downright f*cking outrageous technique needed to become an icon at one of the biggest clubs in the world.