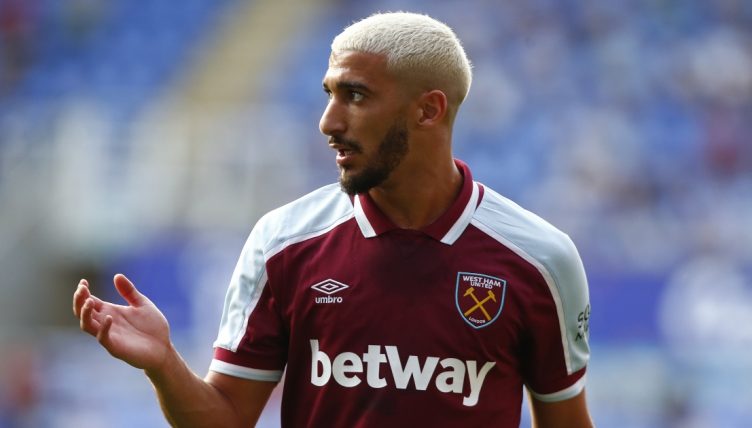 Watching Peep Show is a formative experience for many.

The British sitcom, which ran between 2003 and 2015, has gained a cult following for its relentlessly bleak examination into human behaviour and the selfishness that lies within us all.

An inevitable question all watchers have asked themselves is whether they’re more like Mark or Jez – the kind of question where both answers are varying degrees of wrong.

Fans of West Ham United will surely relate more with Mark; the permanently pessimistic outlook, the painful self-awareness of your own limitations and being afraid to become excited when disappointment surely lurks around the corner.

But things may be finally changing for the better. And Said Benrahma represents that change better than anybody.

Benrahma’s first season at West Ham wasn’t the most successful if you judge a player’s output solely on statistics – one goal and six assists for a £30million outlay would usually march him firmly into Simone Zaza territory.

But Hammers fans noticed something different about the Algeria international. As West Ham unexpectedly thrived last season, led by the resurrection of the Moyesiah as a credible Premier League manager, Benrahma had moments of bewitching genius.

A deft piece of footwork here, a wicked cross there, a stepover executed so casually you’d imagine the playmaker could do them in a coma.

In short, there was potential there. Something worth persisting with while Benrahama found his feet following his move from Brentford.

Things began looking up towards the end of last season. Benrahma scored a crucial equaliser at Brighton in May and his assist against West Brom kickstarted a comeback win when West Ham looked in danger of blowing European qualification altogether.

Now Benrahama has ended the careers of two Celtic defenders as West Ham recorded a thumping 6-2 win at Celtic Park.

Clearly still in holiday mode, David Moyes cut loose on his return to Glasgow and fielded an extremely attacking line-up.

It bought to mind the rudimentary FIFA tactics of playing all your forwards at once, but Moyes is cannier than your average gamer.

West Ham invited Celtic pressure before nabbing possession and breaking with lethal intent, in a free-jazz interpretation of Germany’s 2010 World Cup side.

And nothing demonstrated this better than the away side’s fourth of the afternoon. Craig Dawson started the move, intercepting a through ball inside his own penalty area before finding Antonio.

Antonio, the very definition of a striker who’s ‘unplayable on his day’, held off his marker before slipping a pass through to the onrushing Fornals. Finding himself in a two on one situation, Fornals offloaded the ball quickly to the unmarked Benrahama.

The move was already slick but it was about to be elevated to magical levels.

Dane Murray came across to dispossess Benrahama. Murray only made his professional debut against FC Midtjylland four days earlier and can perhaps be excused for the naive manner he dived into the tackle.

Unfortunately, the tackle was signposted so far in advance it could have arrived by telegram. Benrahma saw it coming and waited for Murray to slide past before advancing onto Scott Bain in the Celtic goal.

Well, that was the theory. But Bain was also sitting on his arse having fallen for Benrahama’s feint. The following finish into an empty net was merely academic.

Speaking earlier in the week, Moyes told the official club website: “I’m trying to get back to our level at the end of last season as quickly as we can.”

On this evidence, Benrahma and West Ham could be even better this year – even if admitting so aloud would represent the kiss of death to the club’s supporters.

But there’s no need to think like Mark Corrigan when Benrahma can end two careers just for fun.