Salomón Rondon and a wonderful goal that deserves much more publicity 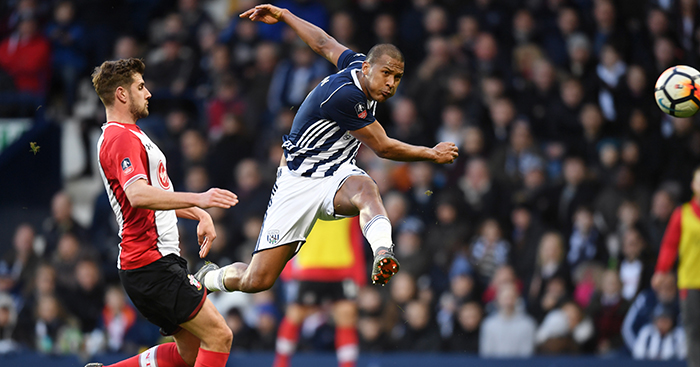 As a Southampton fan, I was struck by how little coverage there was of Salomón Rondon’s amazing goal for West Brom last weekend.

It got me thinking about how the greatness of a goal is judged. Rondon’s goal has barely been spoken about in the few days since he scored it so it’s probably safe to say it won’t be getting shown a year from now, but why?

What is it that makes some great goals memorable enough to be replayed 20 years later where others are forgotten about almost as soon as they’ve hit the back of the net?

Yet in reality this is a question of percentages. As Jimmy Greaves once said: “If I had scored every goal I’d missed, and missed every goal I’d scored, I wouldn’t half be in the record books.”

To put it another way, the best players convert a higher proportion of their chances, but it’s still less than 50%. A goal isn’t better just because a great(er) player scored it. They are all trying to score; the best players just succeed more often.

Salomón Rondón doesn't believe in having a touch… pic.twitter.com/CtTo8vm0Vb

So how should we judge a great goal? Well, as the Olympics are on, it seems clear there should be two criteria: Technical Merit and Artistic Merit.

And goals should also be split into 3 main categories:

Single strike. Though a couple of touches are allowed

Pundits seem to get far more excited about team goals than I do. And I love tiki-taka. I remember the never-funny Mark Lawrenson wittily choosing the whole Argentina team as his team of the Group stages in WC 2006 on the back of this 25- pass goal.

In general these goals tend to hinge on the last one or two passes. The crucial pass in the Argentina goal is the last one, a backheel, which opens the way for Cambiasso to score. The preceding passes were virtually superfluous.

Clearly, there could be many other categories: Towering headers, Diving headers, Bicycle kicks, Own goals, Deflected goals, Mis-hits, Penalties, Best goal scored without regard to personal safety, etc.

But these are largely niche, like the ones nobody talks about at the Oscars such as Best Sound Editing.

Degree of difficulty: Mark goes up as the number of footballers capable of making a decent attempt at it goes down

Unsaveability factor: Which likely means the ball going in a corner/close to the woodwork

Cojones factor: A shot taken where the likelihood of it going wrong is high, and the player consequently looking an almighty fool as the ball sails into Row Z, or dribbles away towards the corner flag

Velocity: Everyone loves a thunderbastard

Just looks beautiful: You know it when you see it. Harsh on many of Peter Crouch’s great goals perhaps, but they often look like a triumph of untangling his limbs. Account can be taken of the assist

Yeboah factor: Hitting the underside of the bar always adds to the aesthetic quality of a goal

Muppet factor: See above. I think there is both Artistic and Technical Merit

Choreography: Rarely seen, though a recent example is what Sofiane Boufal made happen to Nyom & Dawson, as so eloquently described here.

Technical Merit: Very high degree of difficulty and cojones ratings. I am no footballer, but pundits often talk about how difficult it is to hit a ball dropping over the shoulder. It certainly looked hard. Most players would likely have tried to control the ball first.

Unsaveability: Very high. Just inside the post, and the ball was past the keeper before he dived, albeit his positioning left a lot to be desired.

Artistic Merit: It looked fab. The pass was terrific. And the ball hit on the volley, while in mid-air, and running at full speed. There was a lovely curving flight to the ball as it bent just inside the post. although no Yeboah or Muppet points.