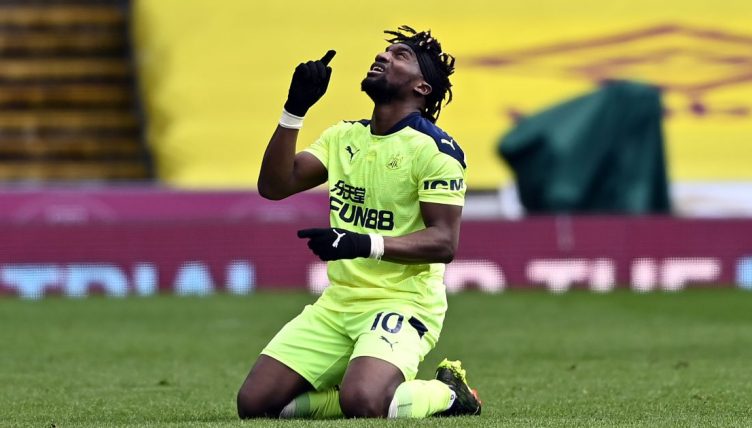 In late January 2021, after two months out with injury and illness, news came through that Newcastle winger Allan Saint-Maximin was ready to return. The Toon Army were delighted.

To mark the occasion, NUFC TV were preparing a short to-camera interview with the 24-year-old. And as they recorded, Dwight Gayle ambled past in the background. “The saviour is back,” Gayle quipped as he walked past, drawing a chuckle from Saint-Maximin.

But in Gayle’s little joke, there was a little pinch of jealously and more than a grain of truth. Saint-Maximin is the newest Geordie messiah. Following him and his dancing feet is the one route they have to deliverance from damnation (to the Championship).

Prior to Saint-Maximin’s return in January, Newcastle had picked up two points from a possible 21. Following his reintroduction, they picked up seven from the next 21. It was still hardly Champions League form, but the difference was clear.

Infuriatingly, the fleet-footed Frenchman then pulled a groin muscle in late February and would be out until April. Newcastle’s form predictably dropped off.

"The saviour is back"

But in their game away to Burnley, the ‘saviour’ was back again – not ready to start, but available to make a second-half impact from the bench. And the impact he made proved Gayle’s tongue-in-cheek comment to be far more accurate and incisive that any pundit insight.

When Saint-Maximin is on the pitch, thoughts of Mike Ashley, of relegation or of Steve Bruce’s questionable approaches to tactics and man-management dissipate for a few precious minutes. Newcastle fans can take a breath, sit back and watch a footballing prophet dribble them towards the promised land (aka 17th place in the Premier League).

In a blistering seven minutes after his introduction on Sunday at Turf Moor, he produced an magnificent assist and a goal preceded by a bit of skill so beguiling even a cameraman was baffled by it. With that contrbution, he may well have given Newcastle the impetus they need to stay up.

In a delightful little ironic twist, Bruce decided to introduce Saint-Maximin in place of the ineffective Gayle just before the hour.

Within seconds, the winger/forward/all-round-attacking-whirlwind was leading the way, putting Burnley defenders under pressure and forcing them into sloppy passes for the first time in the game. And within two minutes, he had helped Newcastle level.

Saint-Maximin twisted and turned his way into the box, drawing three Burnley defenders towards him. In doing so, he freed a little room on the edge of the box, saw Jacob Murphy advancing into it and laid off a pass that Murphy dispatched beautifully just inside Bailey Peacock-Farrell’s far post.

The best was still to come though. Five minutes after the assist, Jonjo Shelvey picked the ball up on the edge of the Newcastle box and the counter was on.

Saint-Maximin drifted into the centre circle, cleverly finding that pocket of space that is almost always available between Burnley’s midfield and defence. Shelvey played him in and the Newcastle No.10 was off.

He motored away from a forlorn-looking Ashley Westwood and saw Ben Mee and James Tarkowski ahead. Fellow sub striker Callum Wilson was free to Saint-Maximin’s right, and looked the obvious option, so much so that Westwood and Mee’s eyes were drawn towards him.

But Saint-Maximin used Wilson by not using him, feinting to shot and chopping the ball back inside, fooling Mee, Tarkowski and that poor, hapless cameraman. This is where we are supposed to say he took it onto his ‘weaker left foot’, but with the Geordie messiah possessed by a higher footballing power, there was nothing weak about anything he did at Turf Moor.

Another touch took it out of his feet and the shot fizzed off the surface and past the outstretched fingertips of Peacock-Farrell. It was remarkably similar to a goal he scored against the same opponents in October 2020. Sean Dyche must be sick of the sight of him.

Most players, having just come back from injury and immediately had such a devastating impact, might have started to coast, thinking, ‘Cheers for the game lads, my work is done.’

Yet Saint-Maximin kept going, ready to receive the ball and carry the ball away from danger and his team up the pitch. Ready to torment the Burnley defence, too.

With five minutes left, he led another counter, picking up the ball in the Burnley half, coming inside and holding possession as support arrived, before playing a perfectly weighted, backheel through-ball to the underlapping Sean Longstaff.

With a minute to go, he was at it again, running past James Tarkowski like Minella Times ran past the rest of the field on the run-in to the finish at the Grand National. He then pulled it back to Miguel Almiron, whose shot, to the surprise of few, was hit with no real conviction.

But the saviour’s work was done. The referee blew his whistle, Newcastle opened up a six-point gap to Fulham and Saint-Maximin dropped to his knees to point to the skies.

He had been a one-man superstar attack; presser, ball carrier, dribbler, creator, assister and scorer. When Saint-Maximin is on form, discussions about 4-4-2, 3-5-2 or 4-3-3 formations become secondary, as do concerns over Steve Bruce’s conservative instincts. So long as he puts Saint-Maximin on the pitch, tactical invention becomes an afterthought.

In a week when Saint-Maximin had already made the headlines by giving dozens of care packages to the Newcastle health service workers who have dedicated themselves to saving people during the pandemic, he may well have saved the club they love and his manager’s bacon.

“I feel really really great,” he said on the pitch afterwards. “I think everyone knew this game was really important for Newcastle, so I give this win to the supporters.”

When they’re allowed back in to St James’ Park, they’ll doubtless make clear just how much they love him in return.

The story of Keegan’s second spell at Newcastle: ‘We were a laughing stock’