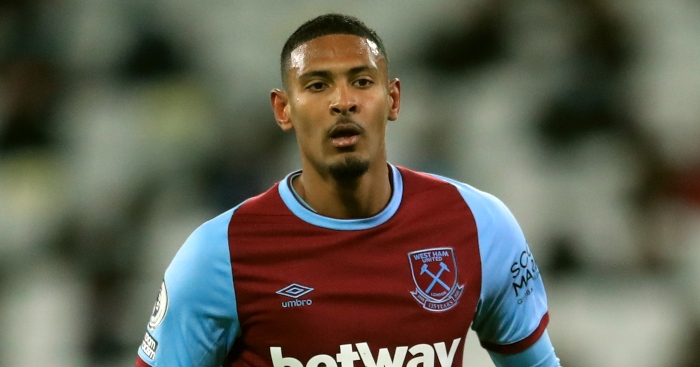 Oh, Sebastien. With West Ham leading Manchester United 1-0 on Saturday, Sebastien Haller burst through in the 40th minute and looked set to finally grab the second goal the hosts deserved for all their first-half dominance. Instead, he fell over.

There really is a lot to admire about the way Haller navigated his way into the box: winning the initial header, making the second flick on, staying onside, rounding Dean Henderson and sitting down Harry Maguire.

But it all proved futile. The Ivory Coast international slipped just as he was about to stroke the ball into the back of the net. From hero to zero in a second.

It’s harsh, but as is natural with modern-day football, all of the striker’s build-up play will likely be completely forgotten, with any sort of admiration making way for mocking laughter.

In all honesty, it’s pretty painful to watch, especially in the knowledge that the Red Devils came back to win the game 3-1.

In a way, Haller’s slip acts as a microcosm of the 26-year-old’s entire West Ham career until this point.

Having made his £45million move from Eintracht Frankfurt to the London Stadium in the summer of 2019, there was plenty of excitement around Haller.

The big man made a promising start to life at West Ham, marking his second appearance for the club with a brace against Watford before following that up with another goal to help beat Norwich City.

At the time, there was almost the feeling that he was untouchable, with his purposefully composed celebration making it feel like goalscoring comes naturally.

That wasn’t to be the case, however, as goals have subsequently come few and far between. Come the end of his debut campaign in England, Haller* had scored a modest seven in all competitions.

It was a disappointing year for West Ham as a whole as they finished a lowly 16th. Plenty of fans viewed Haller’s underwhelming season as a big factor in their struggles.

The striker has actually been in decent goalscoring form this term, scoring six goals in all competitions.

It will be noted that four of those goals came in the League Cup against Charlton Athletic and Hull City, but these were still chances that were clinically taken. He also popped up with a brilliantly-taken header against Wolves, despite coming on with just two minutes left of the game.

It was only after an injury to Michail Antonio that Haller was able to start in the league, but he was unable to make much of an impact in his first two games.

Then he went on international duty with Ivory Coast for the first time, scored on his debut and came back looking a completely new man.

Sebastien Haller’s goal on his international debut for the Ivory Coast earlier tonight in a 2-1 win against Madagascar. pic.twitter.com/oLXIvrVXyC

To make things even better, Haller scored with a brilliant strike from outside of the box to secure a 1-0 victory over Sheffield United.

There was to be frustration once again though; Haller was then benched against Aston Villa before then starting against United due to Antonio’s absence, only to miss his glorious chance.

Throughout his Hammers career, it seems as though Haller has regularly come so close to earning the adoration of supporters, only to slip up at exactly the wrong moment.

No matter the reason why, there have been so many near-misses and false-starts since Haller moved to the London Stadium.

We know Haller is more than capable of getting into the right place at the right time, but he may not get too many more opportunities to prove he’s the right man.

*Buy Sebastien Haller and thousands of other players on Football Index. 18+, UK and Ireland customers only, begambleaware.org. T&Cs apply.