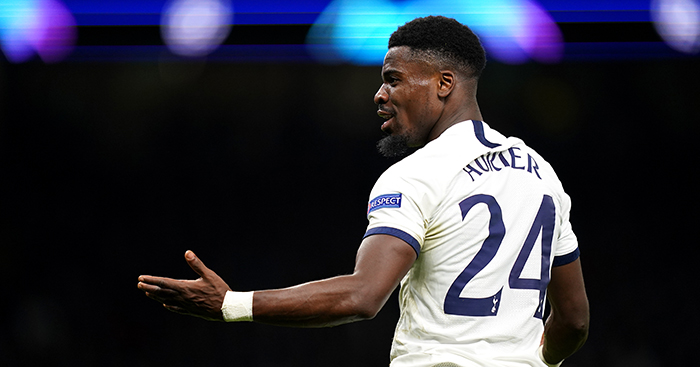 We’ve never seen a Tottenham full-back scouting report, but ‘does stupid things in dangerous areas’ must surely have been written on plenty of them.

It’s not uncommon for full-backs to be better attackers than defenders these days, but few people probably realise what trendsetters Spurs were in this regard. They used to play Gareth Bale at left-back for starters, but that’s just the tip of the iceberg.

Pascal Chimbonda was crazy and Benoit Assou-Ekotto crazier still, but the absolute king of Spurs full-back nutters was Timothee Atouba, a man who often appeared to be on a mission to bring on heart attacks for all those around him.

Joining Spurs in 2004 at a time when it was more than acceptable to just twat a ball to safety out from the back, Atouba would regularly receive the ball in his own penalty area and decide to dribble his way out of danger. And as stupid as that was and as panicked as team-mates and supporters were every time he attempted it, more often than not it worked.

But when your job is to stop the opposition from threatening your goal, ‘it worked more often than not’ isn’t exactly an endorsement about your unique approach to defending. Indeed, it might explain why he only made 18 appearances for Spurs before being moved on to Hamburg.

But Atouba made enough of an impression in those 18 appearances to earn a love letter on these pages, and we’ve been waiting a long time for another full-back to arrive capable of filling his stupid gold boots.

It’s not like Kyle Walker or Kieran Trippier are boring, but we doubt either will ever attempt a Cruyff turn in their own box. And we’ve been waiting too long for that kind of nonsense.

For a while we thought he was just a) rubbish and b) a bit of a dick, but for reasons we can’t quite fathom, the arrival of Jose Mourinho has allowed Aurier to really show off the thing he’s actually pretty good at: attacking.

Again, don’t ask us how this has happened, but having Mourinho become his new manager somehow seemed to convince Aurier that he needed to do more crazy things. Why else would he attempt to beat Marcos Alonso with a backheel volley in the Portuguese’s sixth match in charge earlier this season?

We thought perhaps Mourinho still had other problems on his checklist to solve before getting around to Aurier’s silliness, but six months and one lockdown later, Aurier’s still at it.

In fact, if anything he seems to be attacking more than ever. It’s almost as if Mourinho has, not unwisely, instructed him to stay away from his own goal as much as he can.

We can talk about the problems such an instruction might create for the rest of the team, but who wants to talk about tactics really?

We definitely do need to mention him being easily tackled by Felipe Anderson when he tried to dribble his way out of the back with three minutes to go, leading to a West Ham attack which clearly annoyed Mourinho, but remember points a) and b) from before? We never said they no longer stood. In many respects, Aurier probably isn’t good enough.

But what we really want to talk about is a couple of seconds in the 75th minute which truly encapsulated everything you get with Serge Aurier.

Receiving the ball 10 yards in the West Ham half, quickly closed down by Anderson and with no obvious forward pass on, most full-backs would have looked back instead. Some might even have gone all the way back to their goalkeeper.

But opposing players, playing it safe at 1-0, the threat of a counter-attack, having Mourinho as manager…they aren’t things that concern Aurier. So he did this.

A nutmeg to beat Anderson, quick feet to go past Tomas Soucek and Aurier was suddenly in a bit of space. Steven Bergwijn was there for a one-two and somehow Aurier had got Spurs into a promising position.

Obviously, he ignored Bergwijn, got tackled trying to beat one player too many and suddenly put his team in trouble as West Ham set about starting a counter-attack in the space the Ivorian had just vacated.

Fortunately, it came to nothing, Harry Kane added a late second and afterwards we could focus on the fact that his crosses looked dangerous rather than the fact they never quite found their target. That he beat Anderson and Soucek so comprehensively that Anderson threw his hands into the air in dismay, rather than the fact that he got caught out trying to inflict more misery on the same player later on when he really should have been focusing on seeing the game out.

And that’s Aurier in a nutshell. There’ll always be a positive and a negative to his performances, and we’re not going to argue with any Spurs fans more focused on the negatives.

But as neutrals we don’t need to worry about that. Long live the crazy Spurs full-back.

Ruel Fox: Gross was ‘too advanced’ for Spurs; Graham ‘fobbed me off