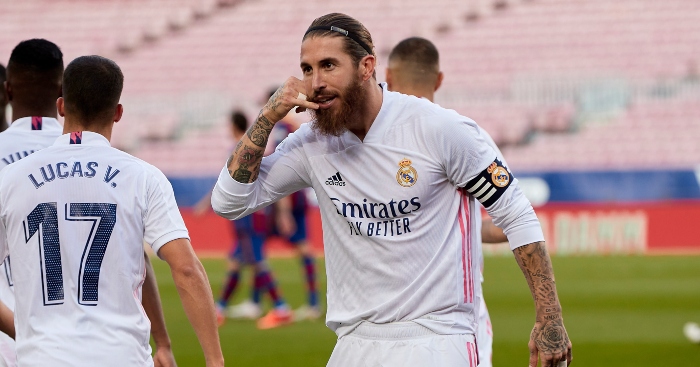 Hopes surrounding the latest El Classico clash were perhaps their lowest in a generation.

Both Barcelona and Real Madrid have experienced a decline in fortunes over recent seasons and have been overtaken in Europe by the likes of Bayern Munich and Liverpool. It seems so recent, and yet so long ago, that this fixture was unquestionably the best in world football.

Nevertheless, when Sergio Ramos is around there will always be no shortage of talking points.

Sporting a beard and tattoos that were reminiscent of a Hackney barber, Ramos* had an eventful match at the Camp Nou.

His second-half goal, another decisively taken penalty, effectively broke Barcelona’s spirit and tipped the scales in Madrid’s favour. Never mind the presence of mind to ensure he was falling while his shirt was in Clement Lenglet’s hand. Penalty kick. Once a shithouse, always a shithouse.

However, his most eye-catching moment came deep into injury time.

Upon seeing Lionel Messi tear towards them in acres of space, almost all defenders would require a change of shorts before being required to do any defending – especially after being embarrassed by Little Leo earlier in the game.

Not Ramos. Like a poacher waiting for the exact moment to capture their prey, he lured Messi into a false sense of security, daring the forward to dribble around him.

Messi took the bait and attempted to glide past the Real defender. Showing an admirable commitment to unorthodox body movements, Ramos rotated himself and flicked the ball away from Messi with his left leg. The tackle left Messi firmly on his backside, a visual representation of the preceding 90 minutes, with more than an air of Bobby Moore vs Jairzinho.

Madrid saw out their 3-1 victory and Ramos had once again reiterated his status as the world football’s premier defender. Yes, he may give the impression he’d run over the family dog for a win, but that’s exactly the point.

This tackle from Ramos on Messi isn’t talked about enough
pic.twitter.com/RxtKXSkgZf

*Buy Sergio Ramos and thousands of other players on Football Index. 18+, UK and Ireland customers only, begambleaware.org. T&Cs apply.