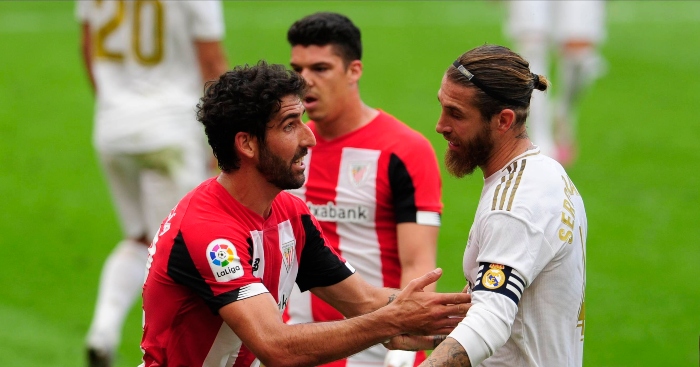 Amid all the recent talk of ‘the new normal’ and needing to make adjustments, it’s refreshing to at least see Sergio Ramos has no plans of changing.

Football’s greatest supervillain (sorry, Diego Costa) has gone back-to-back for Real Madrid, scoring consecutive penalties to break the deadlock against Getafe and Athletic Bilbao and put Los Blancos all but over the line in the race for the Spanish title.

At San Mames, though, the veteran added another moment of classic Ramos, avoiding the concession of a penalty for no reason other than: It’s Sergio Ramos, and Sergio Ramos gets away with these things.

He’s the kind of opponent who will bully you both physically and psychologically for 90 minutes every game, working to break your spirit several times over and leave you dreaming of the moment you can turn his actions around and have your sweet, sweet revenge. The opportunity for revenge doesn’t present itself, though, and you’re left with that void where a resolution should be.

He’s your perfect reminder that real life isn’t like the movies. That the game is broadly rigged in favour of the bully and anything other than their success is just a blip between two separate glories.

It’s why he can run the show so confidently. Why he can go about his business without fear of retribution. He’s a winner, in part, because he acts like one and lets everything else take care of itself. If you act like you have a god-given right to success, sometimes success itself will decide there’s no point fighting the assumption and leave you to it.

The goal in Bilbao was Ramos’ fourth since the restart, more than any other Madrid player across June and July. Even though three of the four have come from the penalty spot, you still need someone to convert from 12 yards, and the defender has been unflappable.

We’re not here just for the penalty, though, and you probably know this much.

Shortly after Ramos beat Unai Simon from the spot, the defender was at the centre of controversy in the other penalty area when he appeared to tread on Raul Garcia’s foot off the ball.

Ramos later claimed it was accidental, and if he was a different player we might give him the benefit of the doubt. He’s not a different player, though. If there are two potential scenarios, one of which involves Sergio Ramos having embarked on some nefarious scheme, we know which one we’re more likely to believe.

Sure, sure, there’s nothing stopping Ramos from responding to the allegations by saying, ‘Of course I meant to do it, and I’d do it again,’ and following it with the cackle that a Bond villain would deem ‘a bit too hammy’, but it’s part of a longer game to leave a bit of doubt in people’s minds.

If your entire game is based on permanent unpunished guilt, you leave yourself open to the balance shifting, whether that means a referee deciding he doesn’t need to stand for your bullshit, or just an opponent deciding to lamp you on the grounds that he doesn’t feel he has the mental fortitude to avoid crumbling in the face of your taunts at some point so why not take the initiative.

This is why Ramos has to leave some reasonable doubt. To ensure ‘because it’s Sergio Ramos’ cannot be used as an excuse or justification by anyone other than Sergio Ramos himself.

📸 – Raul Garcia screams for a penalty after an incident with Ramos but the play continous. pic.twitter.com/zMmmgGNjaE

At 34 years of age, logic dictates Sergio Ramos only has a finite amount of time left to wind up opponents and remind them just where he stands in relation to the game and everyone within it.

You might expect him to go all out in this situation, trying new and more creative ways to exert his superiority, but then again he doesn’t need to.

Sergio Ramos is a winner. He knows that. We know that. The people paid to try to stop him winning know that. He’ll keep doing whatever he wants, and who are we to attempt to stop the inevitable?

In a football world where all manner of things are beginning to feel possible for the first time, it’s important to stay grounded and remember we were naive to think some things aren’t permanent.