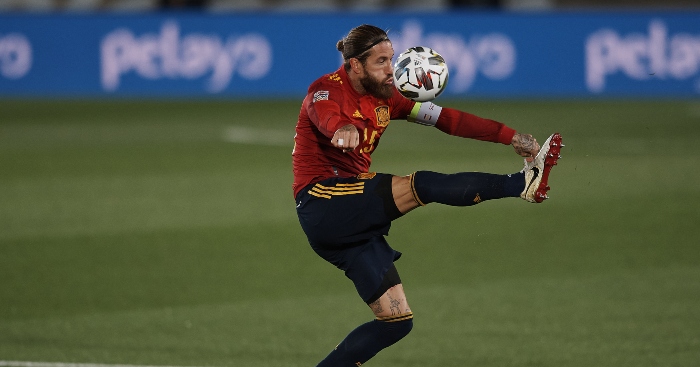 Life would be dull without Sergio Ramos.

While his very existence demonstrates that many of life’s winners come across as irredeemable bastards, one of the glories of following football is identifying our villains and rooting against them.

With his unflinching commitment to shithousery, acting as the beating heart of Real Madrid (football’s ultimate overdogs) and having the general air of a man who would sell his grandmother for a clean sheet, Ramos more than fits the bill. We’ve all wanted to Eric Dier him at some point.

But Ramos remains an excellent player and one of the finest defenders of his generation. For evidence, look no further than his tackle during Spain’s Nations League victory over Switzerland on Saturday.

Faced with an onrushing Ruben Vargas, mere mortals would desperately try to stay on their feet and hope to shepherd the winger away from goal. Alternatively, many would have adopted the ‘Maitre D’ position and clasped their hands behind them in order to prevent any handballs, ultimately welcoming the ball into their humble net.

Sergio Ramos thought otherwise. In one movement, he turned away from Vargas and swept his heel towards the ball, resulting in Ramos claiming both the ball and the dignity of his opponent.

Like all the best players, he made this tackle look effortless and natural. Above all, it looked cool.

Sergio Ramos with possibly the coolest tackle of all time right here, and absolutely ends his opponent as well 😂 pic.twitter.com/idzDtfTG9z

Ultimately, there are few things more beguiling than an anti-hero – somebody you’d hate your daughter to end up with but cannot help admiring at the same time.

Even at 34 years old, Sergio Ramos continues to prove that the world is his and we’re just inhabiting it out of his goodwill.

Just ask Vargas, the victim of the most causal backheel tackle you’re ever likely to see.