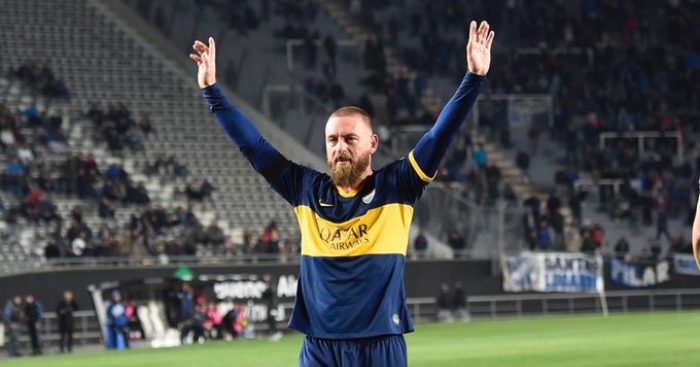 Think carefully before you get a tattoo, they say. Choose something that has real meaning, a design that will never get old, even when you do.

Most 21st century footballers, unfortunately, do not listen to what they say. Take a cursory glance at the top level of European football. Body art abounds and, let’s face it, most of it is abysmal.

But Daniele De Rossi is not most 21st century footballers – there has always been a more imperious air about this particular Roman.

And before he inked his right calf, he clearly plunged into the depths of his own soul. “What matters most to me?” he asked. “To which craft have I dedicated the finest years of my life?”

The answer, one imagines, came in a flash. “Smashing the shit out of people’s ankles,” he thought. “That’s it!”

Off to the tattoo parlour he went. And out he came with an illustration that he could replicate every weekend until the end of his career. 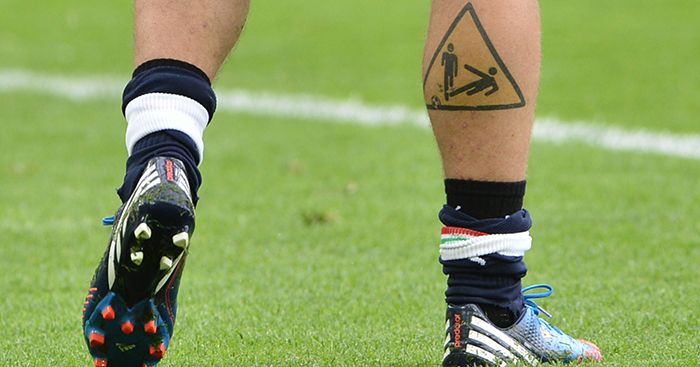 Now, for the first time in two decades, that career has taken him away from Rome, crossing an ocean and swapping hemispheres to pull on the iconic blue and yellow shirt of Boca Juniors.

At 36, De Rossi’s days on the pitch are drawing to a close. But he would not have been short of offers after his long love affair with the Giallorossi came to an end.

A 2006 World Cup winner with the sort of dedication that would lift any team, available on a free. Clubs in China, the US and Middle East were on red alert and the offers would have been handsome. Plenty of his colleagues have chosen to tread a similar path for one last payday.

Instead, De Rossi has elected to follow his heart.

South America may not be awash with cash, but it has what those other countries’ top divisions cannot offer: history, tradition and inebriating atmospheres.

Convinced by ex-Roma team-mate Nicolas Burdisso, now a director at Boca, he has made the move that the 12-year-old child inside all of us would, given the choice.

Millions dream of going to the Bombonera, the three-sided arena that rises sharply up out of and towers above the La Boca district of Buenos Aires, just to stand on the trembling terraces. De Rossi now gets to play on the pitch in the middle of it.

“The passion for this club has moved me since I was young,” he said in his first interview with Boca’s official site.

And he will feel right at home. Buenos Aires is a city with a deeply felt connection to its working-class, Italian heritage. The football is tough and uncompromising, so De Rossi’s style of play will endear him to the locals.

Yet a description of the ex-Roma man that is restricted merely to his combativeness does him a disservice.

At his peak, he was the complete midfielder, just as comfortable creating chances and driving forwards with the ball as he was winning it back, intelligent in his movement and endlessly energetic.

And in his Boca debut on Tuesday night, in a Copa Argentina tie against second division minnows Almagro, he showed both those sides of his game.

Playing alongside the inexperienced Nicolás Capaldo in Gustavo Alfaro’s unimaginative, two-dimensional 4-4-2, he was charged with playing as the deeper of the two, plugging gaps and winning the ball back.

But when Boca won a corner with just under half an hour to go, he seized the chance to get into the opposition area, rising above the Almagro defence to nod Brighton loanee Alexis Mac Allister’s corner into the back of the net.

Almagro equalised late on and proceeded to send Boca out of the Copa Argentina on penalties, winning 3-1 pic.twitter.com/nH4PwKrvsx

Just five minutes later, he saw another opportunity. But this time it was to replicate that image that he carries with him on his right calf.

José Méndez was the unfortunate recipient and went to ground clutching his ankle and screaming in pain. De Rossi got up, looked towards the ref and drew a circle in the air with his two index fingers, “I got the ball.” Unconvinced, the man in black brandished his yellow card.

Why this guy making a surprised face de Rossi literally has a tattoo warning him pic.twitter.com/4TWKF606Xp

Despite his full house in the first half, the game would not turn out as De Rossi would have dreamed. Almagro equalised with under 10 minutes left and went on to beat their goliath opponents on penalties.

But Boca’s focus this season lies elsewhere. They are intent on taking back their league title from Racing and, most importantly, getting revenge for last year’s Libertadores defeat at the hands of eternal rivals River Plate.

In the first of those two missions, De Rossi got off to a promising start on Sunday, in his first game in front of that famous Bombonera crowd.

With goals from Carlos Tevez and ex-Benfica man Eduardo Salvio, Boca overcame Aldosivi to go third in the Superliga after three games.

And on Wednesday night, they will face an LDU Quito side featuring Antonio Valencia in the quarter-finals of the Copa Libertadores.

If they defeat their Ecuadorian opponent, as expected, they could set up another clash with River.

It would be the perfect occasion for De Rossi – both for him to experience that famous atmosphere he has come for, which would hopefully not boil over as it did last December, and for him to prove his worth.

Boca have brought in several players since that disappointment in Madrid – alongside the Italian, they have signed the aforementioned Mac Allister and Salvio as well as Jan Hurtado and Franco Soldano – and are set on lifting their first continental title since 2007.

“Winning a big tournament here would truly be the crowning moment of my career,” the Roman continued in his interview with the Boca site.

For starry-eyed football romantics like De Rossi, they don’t come any bigger than the Libertadores. And you can be sure he’ll give his all to get there, even if that means smashing a few ankles along the way.