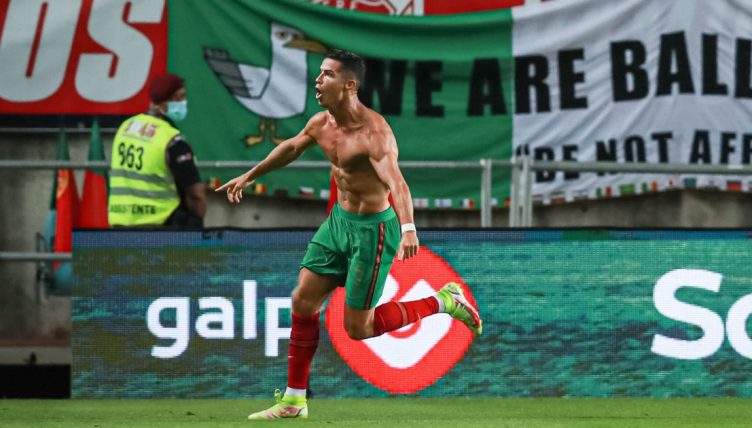 It wasn’t going to be his night. Until it was.

As the clock ticked down in Faro-Loule, Cristiano Ronaldo and Portugal were staring down the barrel of an ignominious defeat.

That might seem like a harsh description to describe losing to the Republic of Ireland, ignominious being a word more closely associated with humiliations against the minnows of the game.

But Ireland haven’t been a serious proposition in some time. Their decline has been such that a home defeat to Luxembourg in March wasn’t much of a surprise.

Manager Stephen Kenny has come under pressure as the side struggled to score goals, but they rallied to produce a performance of immense bravery on Wednesday evening.

It looked like producing an evening of frustration for Ronaldo. Manchester United‘s new signing saw an early penalty saved by 19-year-old goalkeeper Gavin Bazunu, the delay of five minutes between its award and its taking not coming to Ronaldo’s aid.

Then there was a bizarre cameo seconds before Ronaldo’s spot-kick where he slapped Dara O’Shea for having the temerity to touch the resting ball. It could be said that O’Shea went down like a sack of potatoes, but that would be a metaphorical equivalent of low-hanging fruit.

With Ronaldo needing to score to break Ali Daei’s international record of 109 goals, signs of annoyance were beginning to show – the look on several well-positioned team-mates when Ronaldo ignored them in the box to fire a shot miles over was a masterclass of suppressed irritation.

But football’s greatest showman wasn’t to be denied. With the game about to enter injury-time, Ronaldo rose majestically to plant Goncalo Guedes’ cross beyond the despairing Bazunu.

The goal that made Christiano Ronaldo the GOAT and monster. Suiiiiii pic.twitter.com/lnwpt3zKqp

If that wasn’t enough, the 36-year-old powered home another expert header after Joao Mario had produced a cross for his liking. In the 96th minute. No wonder The Guardian’s Barry Glendenning, an Irishman to his core, responded with two words: ‘The git’.

Ronaldo has done it again 👏👏 pic.twitter.com/TOWu9HFqMC

“I’m so happy,” he says in his post-match interview with RTE’s Tony O’Donoghue. “Not only because I beat the record but because of the special moments that we had.

“Two goals in the end of the game … so tough but I have to appreciate what the team did, playing until the end. And the supporters … I’m so glad.”

And Ronaldo took to Instagram to write: “Thank you Portugal. Thanks to all my team-mates and opponents for making this journey so unforgettable. Let’s keep meeting inside the pitch in the years to come. I’m not closing the count just yet…”

You just know he’s right. Football’s greatest showman will continue to be the centre of attention for a good while yet.