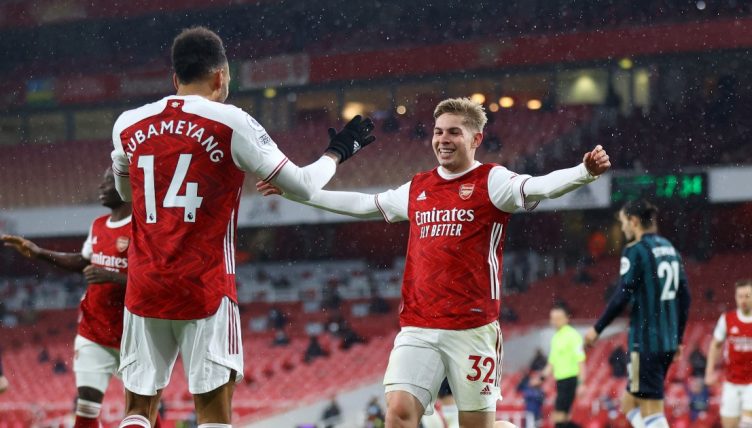 It was easy to pick a focal point for the post-match analysis following Arsenal’s enthralling 4-2 win over Leeds on Sunday afternoon. Pierre-Emerick Aubameyang was back.

After a horrendous start to the season by his own exacting standards – just two goals came in his first 12 league games of the campaign – and a few weeks off to be with his ill mother, the Gabon striker well and truly returned to his best, banging in a 35-minute hat-trick to take the game away from Marcelo Bielsa’s men.

But as he walked away with the match ball, Aubameyang knew it wasn’t about him. Or at least, it wasn’t all about him.

This was a true team display from an Arsenal side full of youthful verve, and Aubameyang had said as much with his celebration for the close-range header that completed his first Premier League treble.

Rather than run towards the corner flag or find the nearest camera to take the plaudits for himself, Arsenal’s 31-year-old forward had turned around and pointed to his 20-year-old team-mate Emile Smith Rowe.

All Arsenal’s youngsters – homegrown or not – had been brilliant. Bukayo Saka was relentless and instrumental to Arsenal’s second and third. Martin Odegaard’s full debut was more than assured.

But of the three attacking midfielders, it was Smith Rowe who stole the show – and his assist for Auba’s hat-trick goal was the moment of the game.

Arsenal were already three to the good when the whistle started the second half, so the easy thing to do would have been to sit in and defend the lead.

But Arsenal knew this Leeds team were not about to throw in the towel, so they went for the knockout blow. And in Smith Rowe, they had a player capable of delivering it.

As Helder Costa dallied on the corner of the Leeds area, the Croydon De Bruyne came in and nicked it off his toe, leaving himself 18 yards out with Luke Ayling and Illan Meslier to beat.

The obvious solution was to touch the ball onto his left foot and shoot low and hard at the near post. The gap was there and Meslier had conceded from tight angles for Arsenal’s first and third.

Smith Rowe had other ideas. Out of the corner of his eye, he spotted Aubameyang darting in towards the back stick and saw the almost-impossibly tight corridor through which the ball could travel to get there.

With minimal back-lift, his right foot dug out a millimetre-perfect cross with whip and curl, leaving Aubameyang with the simplest of tasks.

Mesut Ozil might have departed, but as the ball left smith Rowe’s toe, the German’s creative spirit swept across the Emirates pitch like the cold, north London winter wind.

Saka was interviewed last week on the official Premier League YouTube channel and his praise of Smith Rowe was unequivocal: “He was patient for his opportunity and I think he deserved it. When he got it he took it and showed the impact he can make for the team.

“He’s a livewire across the pitch, he’s everywhere, he will run into space, pass into space and create opportunities for all of us. I love playing with him and I’m really happy with what he’s done in the team since he’s come in.”

It’s easy to see why.

Saka already has that famous No.7 of Sanchez, Pires and Rocastle – surely it’s only a matter of time before Smith Rowe gets the 10 of Ozil, Bergkamp and… err… William Gallas.