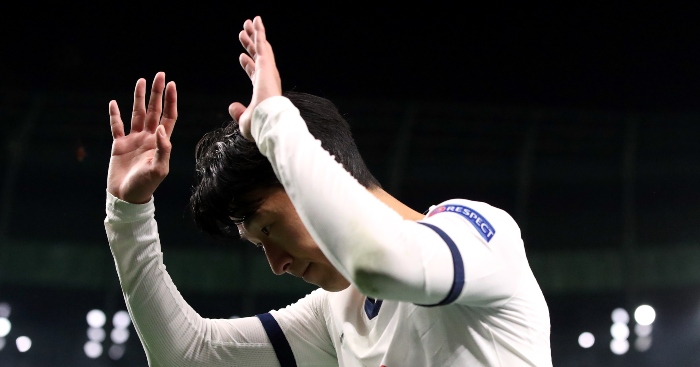 When Son Heung-min was a young boy, it’s easy to imagine his favourite book was Michael Rosen’s We’re Going on a Bear Hunt.

Whenever the family reached an obstacle in front of them, Son was taught an important life lesson: sometimes the best way to tackle a challenge is to meet it head on. There are some things you can’t go over and you can’t go under, you’ve just got to go through them.

When Son Heung-min plays football, that principle remains at the very heart of his thought process.

The beauty of a Son nutmeg is that they are very rarely an ostentatious flaunting of his considerable talent. Instead, they are often the most efficient way of going from A to B.

Sure, he could try to navigate a way around an opponent, but that can be more effort than it’s worth. The most efficient way of beating a defender is often just to go straight through him – as Red Star Belgrade’s José Cañas was the latest to be taught.

Two goals and a career-ending nutmeg in Spurs’ 5-0 victory in the Champions League saw Son set tongues wagging on social media, but the 27-year-old was merely reminding us of his class rather than showing off anything new.

The forward represents the best of Mauricio Pochettino’s football at Tottenham, combining restless energy with a fearlessness to bloody the noses of all those in front of them.

“It’s very hard to run as fast as you can with your legs closed,” James Milner recently told BT Sport when talking about his own nutmeg tormentor, Lionel Messi.

Yet defenders may start to feel like it’s a tactic worth trying when facing Son, who is not quite as associated with the skill as much as someone like Messi or even team-mate Dele Alli – despite all the evidence showing he is up there with the very best.

In fact, it has become so natural to Son that is now merely a part of his basic skill set.

As Laurent Koscielny discovered, Son has the awareness and technique to emasculate his opponents even while singeing the turf at full speed.

And he can even rely on a nutmeg to play a simple pass in tight spaces or win a free-kick to ease the pressure on his side.

Again, unlike most proponents of the nutmeg, it doesn’t feel like he’s deliberately trying to embarrass his opposition, it is merely the most logical option available to him.

Having said that, nutmegging a goalkeeper to score with a backheel when facing the opposite direction is taking the biscuit slightly.

Sadly for Tottenham fans, Son’s pièce de résistance came not in a Spurs shirt but on international duty with South Korea.

He had already left Arturo Vidal scrambling on the floor by being too quick for the veteran midfielder, but what followed on Diego Valdes really should come with an explicit content warning.

There are some things in life that you can’t go over or under, so you just have to go through.

The only difference between Son and the family in the children’s book is that we wouldn’t run away from the bear, he’d nutmeg it.