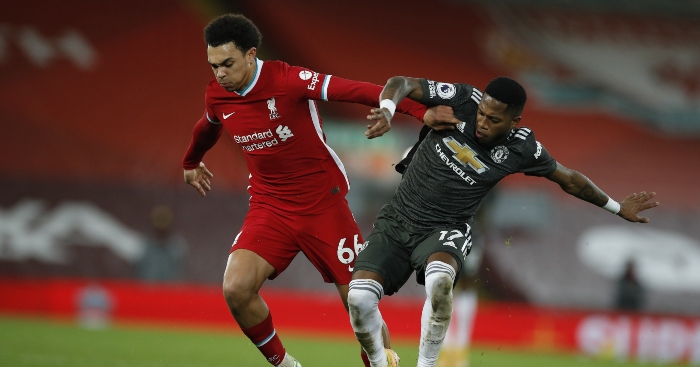 As well as bringing the glory days back to Anfield, Trent Alexander-Arnold continues to evoke memories of Liverpool legends.

Since making his first-team debut in 2016, Alexander-Arnold has established himself as one of the best right-backs in world football, helping the Reds win the Champions League and Premier League.

Despite impressing in that position, he has been tipped by some to eventually follow in Steven Gerrard’s footsteps, leaving the full-back role to become an all-conquering midfielder.

“He can pass like Beckham, Scholes, Gerrard. He has got wonderful vision and ability to manipulate the ball exactly where it needs to be.”

The 22-year-old has also been compared to Gerrard’s former midfield partner after nearly scoring a Xabi Alonso-esque goal from inside his own half against Sheffield United.

While Gerrard and Alonso would’ve been Alexander-Arnold’s childhood heroes, he paid tribute to a different Liverpool legend during their goalless draw with Manchester United.

Graeme Souness may have won countless honours during his illustrious career, but one hilarious moment stands out above everything else.

Instead of taking the ball into the corner during the closing stages of Rangers’ win over Dynamo Kiev in 1987, Souness turned away from the defenders and played a 60-yard pass to goalkeeper Chris Woods, who was then able to pick up the ball.

I would like to wish a very happy and gloriously cynical 30th birthday to That Absolutely Ridiculous Graeme Souness Backpass Against Dynamo Kiev in the European Cup pic.twitter.com/vaWgSNJkqg

Football moved to combat this sort of time-wasting and introduced the back-pass rule in 1992, but if anyone was going to find a creative loophole it was Alexander-Arnold.

With Souness watching on in the Sky Sports studio, the England international produced a stunning back-pass that would’ve made the 67-year-old blush.

While players from both sides struggled to keep the ball under control in the middle of the park, Alexander-Arnold was the coolest player on the pitch and nonchalantly hit a 50-yard pass back to his goalkeeper.

Alisson displayed similar levels of composure to bring the ball down with his knee outside the penalty area before passing back to the right-back, like the most obnoxious one-two in the entire history of the game.

If Alexander-Arnold keeps transforming into Liverpool legends, we wouldn’t be surprised if he’s scoring hat-tricks like Luis Suarez by the end of the season.