Step aside Cristiano, Bruno Fernandes is here to show you how it’s done 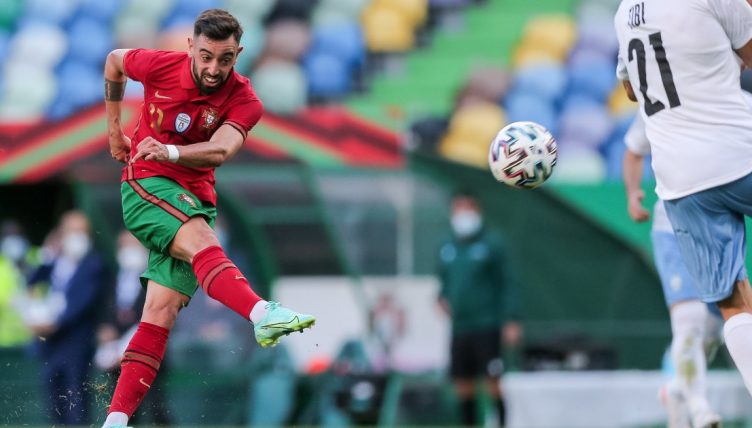 We’re all familiar with Cristiano Ronaldo’s free-kick routine by now.

The swaggering confidence of a candidate submitting an application video for The Apprentice. The stance that’s more in keeping with converting a try at Twickenham. Cheeks puffed and a look of intense concentration that suggests he’s been asked to diffuse a car bomb with his shorts full of cockroaches.

Followed, inevitably, by an effort on goal that keeps the inhabitants of the International Space Station on their toes.

It goes without saying we’re speaking with tongue firmly planted in cheek. But Ronaldo’s terrible effort during Thursday’s 4-0 friendly win over Israel confirmed widely-held perceptions that his free-kick taking is leaving plenty to be desired.

And that’s not all.

With Portugal about to defend their European Championship, there are even increasing whispers that the team may be better off without their ridiculously talented figurehead.

This would have been unthinkable until recently. Portugal may have won EURO 2016 despite an injury to Ronaldo in the final, but a prosaic squad would never have got that far without his presence, leadership and ability to extract the best from his surrounding teammates.

Much has changed in the previous five years. Portugal are now in possession of their most talented group of players since the side led by Luis Figo and Rui Costa that illuminated Euro 2000.

Diogo Jota, Joao Cancelo, Ruben Dias and Bernardo Silva have all emerged to become key players for a Selecao. But the biggest responsibility is being placed on the shoulders of Bruno Fernandes.

For all the magnificence Fernandes demonstrates on a weekly basis in the Premier League, he’s never been able to fully escape Ronaldo’s shadow for Portugal – before Israel visited the Estadio Jose Alvalade, the 26-year-old had only scored twice in 27 appearances while playing alongside the Juventus star.

But, with impeccable timing, the Manchester United man demonstrated he is capable of carrying his country like he carries his club.

He was on hand to open the scoring by sweeping home Cancelo’s low cross and turned provider just minutes later.

With Israel already begging for half-time, Fernandes collected a poked pass by William Carvalho and surged into the inviting gap his opponents had kindly left for him.

Finding himself with enviable amounts of time, the midfielder was able to slow down to a trot and pick out an unmarked Ronaldo on the edge of the penalty area. We won’t insult your intelligence by describing what happened next.

Fernandes continued to dictate play from the centre of midfield as Portugal picked off their opponents with the ease of Tyson Fury scrapping with Ken Barlow.

His display hardly needed further embellishment but more was to come as the game entered injury-time.

After some pinball in midfield, Joao Moutinho emerged with possession and slipped a cute pass towards Goncalo Guedes on the left flank.

Guedes scampered forward and saw his shot blocked by an Israeli defender. Luckily, the ball fell to the lurking Fernandes.

What followed was sublime and effortless in equal measure. Opening his body and shifting the ball onto his right foot, Fernandes lashed an unstoppable effort into the top corner and celebrated with studied diffidence. Statements of intent don’t come much clearer.

As Portugal prepare to walk through the valley of the shadow of death (otherwise known as group matches against Germany and France), there is a growing realisation that a 36-year-old Ronaldo will be unable to shoulder the majority of responsibility – no matter how much he’d protest otherwise.

Fortunately with two goals, one assist and an imperious performance from midfield, Fernandes has demonstrated that Portugal won’t need to rely upon one player anymore.