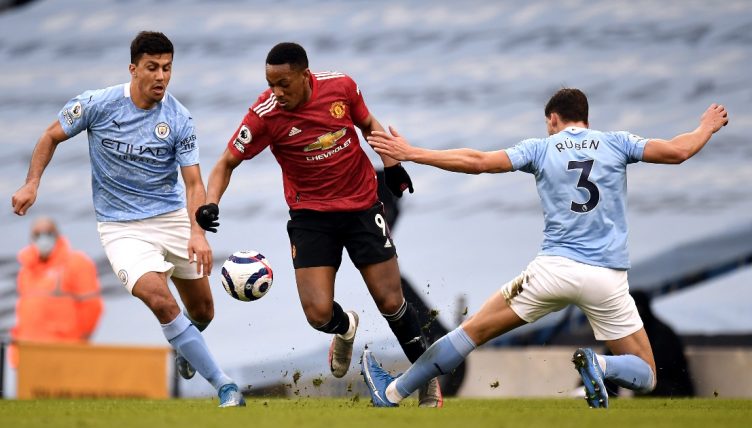 There’s been plenty of criticism sent Anthony Martial‘s way in recent weeks, but there’s no occasion quite like a derby to silence your doubters.

Inside just 60 seconds, Martial set the tone for his best Manchester United display in months, up against the Premier League’s best defence in Manchester City.

Straight away, the Frenchman asked questions of City as he was played into the box, skipping along the edge, surrounded by four sky blue shirts, teasing them, just begging one of them to stick in a leg before Gabriel Jesus inadvisedly obliged.

That turned out to be the game’s defining flashpoint, as Bruno Fernandes stepped up to slot home to the resulting spot-kick.

Not only was this early confirmation this wouldn’t be another dour goalless draw, but it played right into United’s hands. Ole Gunnar Solskjaer’s side are at their best when they have three points to protect and can play on the counter from there.

Martial, playing as the proper No.9 that his squad number suggests he should be, seemed to revel in the state of the game from thereon, linking well with Dan James, Bruno Fernandes and Marcus Rashford in support.

Often this season, the 25-year-old has been asked to play one of those roles himself, but he never looks happy or comfortable playing second fiddle.

It was an individual performance full of highlights, but the standout moment came shortly after Luke Shaw had doubled United’s advantage.

Having received the ball on the edge of the centre circle, in his own half, Martial took a delightfully deft touch to cushion the ball, turning past John Stones in the process before shrugging off Rodri as if he were a mosquito on his shoulder.

From there he had the City backline on the back foot as he strode forward toward them, with multiple options in support. He played it to James, who could have cut back but wastefully shot over, prompting an understandably frustrated reaction from Martial.

Taken off with a couple of minutes to go, Sky Sports commentator Gary Neville – who hasn’t been afraid to criticise Martial in the past – sung his praises, naming him as the man of the match amid strong competition from Shaw.

There was little arguing with the verdict.

Too often this season, Martial has cut a meek figure, struggling to terrify opposition defences or take games by the scruff of the neck as Edinson Cavani often does.

But he’s more than capable of doing so, as he showed at the Etihad.