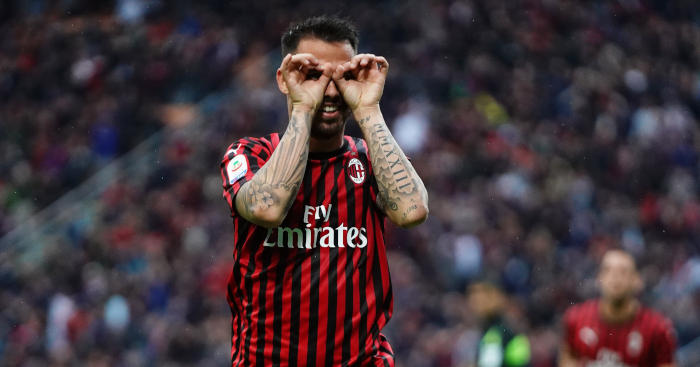 AC Milan are keeping their Champions League chances alive, pursuing a return to the competition for the first time since 2013-14, and their latest victory came thanks to a man who was just starting out when the Rossoneri were eviscerated by Atlético Madrid.

Suso was still at Liverpool in 2014, spending the season on loan at Almería while his parent club came close to a Premier League title, but he has now carved out a new career for himself in Serie A.

The Spaniard crossed the 100-game threshold in the competition this season, chipping in with seven goals in the league and one in Europe. His latest, a free-kick in the victory over Frosinone which kept Milan within a point of the top four, might be the best yet.

A free-kick can be in an inviting position – we have seen that in the past with David Beckham against Greece in 2001 or Lionel Messi against Espanyol just this season – but simply accepting the invitation isn’t enough if you don’t make the effort to show up to the party.

Suso didn’t just do that, though. He made a grand entrance in top hat and tails, pre-warned the DJ to play his entrance music as he walked into the room, and had guests falling over each other to shake his hand as he strolled through the crowd.

It’s the sort of strike you want to applaud before, during and after its journey into the back of the net, before watching it again to do the same thing over again.

It’s both your classic 25-yard free-kick and the opposite of that. The start and end points are as they should be, but the middle carries enough mystique to get you watching over and over to identify the ‘how’.

The end result implies a Beckham-level curler, yet the contact is closer to a David Luiz-style floater, treating the ball like a 99p fly-away from a beachfront store.

He gently strokes the ball over the wall, yet when it clips the underside of the bar it seems to somehow pick up pace as if the woodwork comes equipped with an inbuilt cannon.

We’d normally respond to such inexplicable football sorcery with some kind of throwaway justification like “a wizard did it”, but really, should we be that surprised to see a man named Jesus (Jesús Joaquín Fernández Sáenz de la Torre, to give him his full name) perform miracles on the pitch? Especially when he has form for finding the top corner in a Milan shirt.

Oh Suso, that is outrageous 🤯

The former Liverpool man finds the top corner from range!

It’s the sort of goal that produces a genuinely visceral reaction from team-mates and fans alike.

We see Franck Kessié’s near-disbelief at the ball crossing the line, and the raw energy from Milan captain Alessio Romagnoli as he runs over to celebrate with his team-mates, but the reaction of those in the stands takes it that one bit further.

The cocktail of smirks and screams feels like a movie montage, yet it’s the instant response of thousands who aren’t quite sure whether what they have just witnessed is great or really great. This is what happens when you’ve gone a few years without your team swatting aside the opposition by just being bigger, stronger and better than them.

The Milan of Zlatan Ibrahimović and Thiago Silva is a distant memory after half a decade outside the top four, with the Milan of peak-Kaká even further removed from the present, but any sort of “oh shiiiiiit” moment like this provokes the dual response of being cherished for its relative rarity and forcing those watching to lose any sense of chill.

That cool, after all, is entirely contained within Suso himself. The way he turns away with a half-smile and nod suggests this is just a normal day; that he could do this every week if he felt like it.

Suso's free-kick from the stands 😍🔴⚫pic.twitter.com/i6ZSUvpjBQ

With one game of the season remaining, Milan still need others to slip up if they want to return to European football’s top table.

It was 2012 when AC Milan last even won a Champions League knockout game, a 4-3 aggregate victory over Arsenal which was more nervy than they’d have liked, and indeed that is their only knockout victory in the competition since they won the whole thing in 2007.

The intervening period has brought some baffling signings and – if we’re being harsh – results to match. However, with Suso being complemented by the likes of Lucas Paquetá and Krzysztof Piątek, and with 2007 champion Rino Gattuso finding his way in the dugout, a bit of positivity is returning to the club.

Suso has generally been the sort of player who can produce brilliant moments but shouldn’t be relied upon to be the main man at all times. He can thrive when left to do his own thing while bigger focal points take the limelight, and if that means his higher points look like this then we don’t mind them only arriving every few weeks.

One thing’s for sure, though – we’d love to see this kind of goal – and this shirt – back in the Champions League.