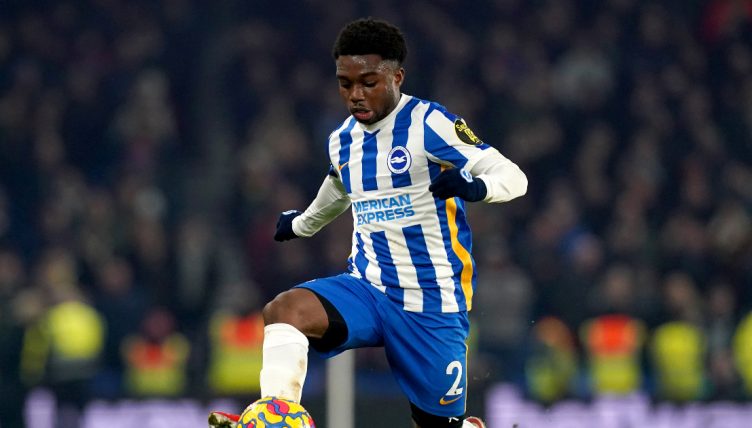 Tariq Lamptey has progressed quickly in the two years since his departure from Chelsea in January 2020, becoming one of the best young right-backs in the Premier League. Naturally, then, he is attracting attention from a lot of clubs.

The 21-year-old joined Brighton as a teenager with just one league appearance for Chelsea, and fast became a fan favourite.

Slotting in at right wing-back in Graham Potter’s 3-4-3 formation, the young Englishman possesses all the fundamentals to play at the very top level: his intelligence and awareness make him defensively tough, whilst his sheer pace and his aptness in the final third complete the modern full-back repertoire.

Tottenham and Manchester United have both been linked with big-money moves for Lamptey, and it’s easy to see why.

He is one for the present and the future, and with none of Emerson Royal, Japhet Tanganga, Aaron Wan-Bissaka or Diogo Dalot particularly standing out, Lamptey would be a clear upgrade in a crucial position for both teams.

Lamptey put in a spectacular performance against his former club in Brighton’s impressive 1-1 draw with Chelsea, the second time they’ve taken points off the European Champions this season.

He terrorised Marcos Alonso down the right-hand side all game, and completed the most dribbles in the match, including an absolute beauty with 20 minutes on the clock.

Within the space of a few seconds, Lamptey stole the ball off Callum Hudson-Odoi, played a one-two, and dribbled past three Chelsea players with ease. They had no answer to his speed.

With Reece James and Ben Chilwell currently injured and Alonso and Cesar Azpilicueta putting in sub-par performances, Chelsea fans would have watched Lamptey leave Jorginho for dead and wondered what might have been.

Yet again, Chelsea’s loss might be someone else’s gain.

Despite having a lot of success with their transfer policy, not many clubs have such a large list of players sold too early. Mohamed Salah and Kevin De Bruyne obviously top the list, but Lamptey is well on his way to proving that he deserved more of a chance.

After struggling with a long-term hamstring injury for most of last season and the start of this campaign, the full-back is now sharp and again a crucial figure in this impressive Brighton side.

Antonio Conte is rumoured to be taking a close look at Lamptey, and it would make a lot of sense for Tottenham. Conte’s system has always relied on strong, quick wing-backs, and Lamptey fits the bill perfectly.

He would arrive as a Premier League-proven defender, in contrast to Emerson failing to adapt to a new league since his £25million transfer from Barcelona.

United, meanwhile, spent a combined £77million on Dalot and Wan-Bissaka, but are in the market for a new right-back due to the limitations of both. Wan-Bissaka isn’t amazing on the ball, whilst Dalot is often poor defensively.

Lamptey offers a lot more in both directions, is younger, more intelligent and quicker than both.

With every passing game he shows why he is such a great talent, and if he continues on his current trajectory, could even be an option for England, despite the incredible depth Gareth Southgate has in his position.