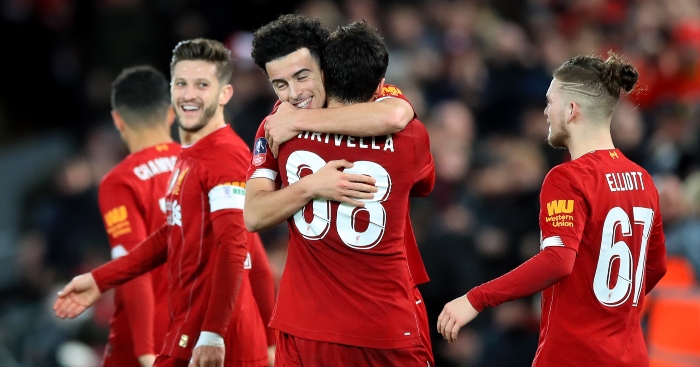 Less than a month after Liverpool‘s kids put up a spirited performance in defeat to Aston Villa, a second-string line-up did the unthinkable and secured victory over a near full-strength Everton side.

At least, it would be unthinkable if we hadn’t already seen the shoots of brilliance at Villa Park, with those who started both games and those introduced for the FA Cup tie at Anfield impressing in equal measure.

Curtis Jones’ stunning winner will rightfully grab the headlines, but there was a move earlier in the second half which reminded us this was a team effort.

Spanning 14 passes in 38 seconds of possession, it showed the very best of what Jurgen Klopp has instilled not just in his first team but in his squad.

Harvey Elliott and Pedro Chirivella both made important contributions, showing they haven’t been too adversely affected by the drubbing in the League Cup quarter-final, while we also saw elements of calm and incisiveness from other individuals.

Most notably, though, this came an hour into the game, with the scores level and the visitors full of pressing. This was meant to be the trickiest part of the tie to navigate, yet they refused to be put off their game, as if to cave to the Toffees wasn’t just a sign of weakness but one of illogic when they had so much trust in their own capacity to move the ball between them.

The move might not have ended in a goal, or even a meaningful shot, but it demonstrated how this group of players deserved their place on a level playing field with an Everton XI boasting a combined 1,400+ Premier League appearances. By contrast, the 11 Reds on the pitch at the time of the move had a combined total of just 467, with Adrian and Adam Lallana contributing two-thirds of that total on their own.

Elliott’s assuredness on the ball at the start of the move comes as no surprise, of course. The 16-year-old demonstrated this kind of confidence against Villa and comes across as the exact kind of player who would be buoyed by a home crowd.

However, as that swagger spread through the rest of those in red it felt as much contagious as coached, despite what we know.

Nat Phillips, making his first Liverpool appearance in any competition, sees the approach of Dominic Calvert-Lewin as a challenge rather than a threat. Jones, starting for only the second time, has an apparent sixth sense for when to play a first-time pass and when to take a little more time and look around at his options.

Then we have Divock Origi, relishing a rare chance at seniority. His contribution was the most vital to the move, and the most likely to bring about a goal at the end of it all, even if Elliott’s low ball into the box was ultimately deflected behind.

The Belgian has enjoyed a wonderful 13 months since scoring a late winner in this exact fixture, and is beginning to look like the player Brendan Rodgers had such high hopes for back in 2014.

As he takes Chirivella’s pass, there’s no intention to wait and figure out Morgan Schneiderlin’s plans before figuring out what to do next – instead, he makes sure Schneiderlin’s actions have absolutely no bearing on his own ability to perform the task at hand.

Then, in finding Lallana, Origi performs what’s almost an inverted nutmeg, coaxing Gylfi Sigurdsson into closing his legs so he can thread the ball through the newly opened gap to the side.

As we saw in last season’s Champions League against Barcelona, and indeed in the bizarre anti-goal in last season’s derby, Divock Origi doesn’t do the normal thing – sometimes the thing he does didn’t even seem to be on the table before he made it so.

Much of the chat after the game centred on Jones’ winner, and rightly so. The teenager’s curling effort, which would have required two Jordan Pickfords to keep out, was a wonderful flourish for a midfielder who had already been enjoying a fantastic game.

But that’s the point: it wasn’t an outlier of any kind, even if it was spectacular in execution. This was a game which was evenly poised, with both teams creating chances throughout the 90 minutes, which says a lot about the quality of the vastly less experienced XI.

“If you want to be a Liverpool player, you have to respect the principles of this club,” Klopp said after the game.

“We cannot always play the best football in the world but we can fight like nobody else. And as long as we use our principles, we will be a difficult opponent to play against.”

Make no mistake, this wasn’t an underdog riding the storm and pulling off a smash and grab – those players all showed they had every right to be there, and only grew into the game as it went on. And while they didn’t always play the best football, there were times at which they absolutely did.