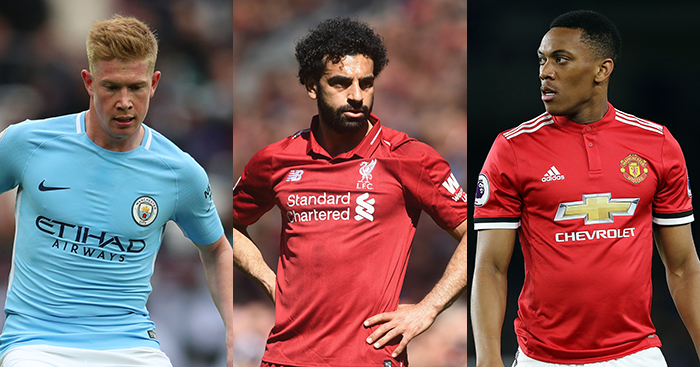 From Anthony Martial’s nutmegs to Mamadou Sakho’s ridiculous backheel, it’s not just Mohamed Salah and Kevin De Bruyne that have given us cause to celebrate this season.

For a season that promised so much, the 2017-18 Premier League bowed out with a bit of a whimper.

We might have known the title was always likely to be wrapped up early, but most expected the battle for Champions League football to prove much more tense than the straightforward conclusion it offered up.

The relegation battle, meanwhile, was at one point thought to involve up to 12 teams, yet we were handed an all-but-mathematical resolution with a game to spare. It definitely owed us more.

Still, sometimes we need to make a trade-off, sacrificing high drama at the last for moments of high quality across the preceding nine months.

So, as we wave goodbye to the league and look forward to the World Cup, it’s time to look back at some of the stand-out moments.

They were not just goalscorers but entertainers, with the fourth of those four-goal hauls highlighted on Anthony Martial nutmegging Andros Townsend with such ruthlessness that one wonders whether it was enough to transfer some of Martial’s powers to the Englishman after Christmas.

Martial last scored in January, while United’s last four-goal league game came a month earlier, just a couple of days before the French forward was at his best once more.

His assist for Jesse Lingard was the highlight of a win over Arsenal which has a good claim for being the best game of the season – certainly in terms of providing entertainment and two teams demonstrating the purest forms of themselves for a full 90 minutes.

The 4-0 defeat at Old Trafford was Crystal Palace’s seventh from their first seven games, and anyone watching that day could be forgiven for expecting them to be done and dusted before the final day.

Their recovery has been so impressive, however, that even a couple of potentially costly missed late penalties haven’t been enough to stop them cruising to an 11th-placed finish.

Success is down to very narrow margins, though, and their resurgence might have been over before it began.

Mamadou Sakho has been key to Palace’s survival – they have picked up 28 points from his 19 appearances, and just 16 from the 19 games he missed, yet his late backheel almost cost Roy Hodgson’s team their first victory against Chelsea, demonstrating the former Liverpool man’s propensity for living on the edge.

While it’s fair to say Palace wouldn’t be where they are without Sakho, his team-mate Wilfried Zaha has made an even bigger impact.

Palace have failed to win a single game when the Ivorian hasn’t featured, and he has joined Memphis Depay this season in showing his class after leaving Manchester United.

Battles at the bottom

Zaha’s defining moment arguably didn’t come in a win, but rather with a late, late equaliser against West Ham United which saved Palace from a ninth defeat in 10 games.

And that goal might have ultimately helped their neighbours also turn their season around.

Slaven Bilić lasted just one more game in charge after that 2-2 draw at Selhurst Park, and his successor David Moyes was able to ensure safety with two games to spare after taking over with the team in the bottom three.

The key to Moyes’ success was a change of focus: Marko Arnautović had been used out wide by Bilić, starting just five of the first 11 games due to a combination of a red card at Southampton and a lack of trust from the Croatian manager (he was left on the bench entirely at Selhurst Park), yet Moyes almost immediately used the Austria international as a central striker and was rewarded greatly.

Ultimately, Arnautović’s former club Stoke dropped out of the league, along with Swansea City after the Welsh club ran out of gas, and a West Brom side who were architects of their own downfall – quite literally, on at least one occasion.

The departing clubs will be replaced by a Wolves side who cruised to promotion with Rúben Neves in inspired form, even scoring one worldie in the same week Danilo did so for the Premier League champions.

The Brazil right-back might end up featuring more heavily than anticipated at the World Cup, following an injury to Dani Alves, but he’s way down the list when it comes to players responsible for City cruising to the Premier League title in record-breaking fashion.

City went top in September with a 6-0 win at Watford and have stayed there ever since, losing just twice and only failing to score on two occasions, against Crystal Palace and Huddersfield Town/

Raheem Sterling and Leroy Sané have thrived in City’s front three, to the point that Sergio Agüero’s record of one goal every 94 minutes has flown under the radar.

Play has been dictated in part by David Silva, whose incredible season is made even better by (a) his age and (b) his regular returns to Spain to care for his son Mateo, who was born prematurely in December. Plenty could have forgiven him a mediocre season, but he’s been as impressive as ever.

The star of the show, however, has been Kevin De Bruyne. The Belgian will be a huge threat to England at the World Cup, even with international team-mate Michy Batshuayi missing the tournament and Romelu Lukaku entering it off the back of some less-than-inspiring form.

An incredible blind pass for Sané in a 7-2 victory over Stoke might have been the highlight, but De Bruyne has been consistently brilliant throughout the season, and few would have argued had he been named Player of the Year.

That he hasn’t claimed that accolade is down to one man and one man alone. Not only has Mohamed Salah scored hatfuls in the Premier League, drawing level with Luis Suárez’s Liverpool record back in April, but he’s helped the Reds to a Champions League final.

It’s not just about the Egyptian, of course – there are three names in that Sugar, Sugar rewrite, after all – but he has more than made up for the loss of Philippe Coutinho, whose slow start at Barcelona has featured the odd flash of brilliance.

I wrote about Salah back in January, when he was in the midst of an impressive debut season at Anfield, but few would have been surprised to see him drop off a little after scoring 24 times before the turn of the year.

Instead, however, he has added a further 21 in 22 games, including crucial Champions League goals against Manchester City and Roma.

Throw in Sadio Mané’s big-game goals, Roberto Firmino’s no-look finishes and James Milner’s tireless running, and you have a team who no one is writing off ahead of a Champions League final against holders Real Madrid.

So yes, the Premier League might have effectively ended a week early, but plenty was crammed into those first 37 rounds of games.

Time to drink it all in, have a nice little reminisce, and get ready for the World Cup.

11 of the hardest b*stards to play in the Premier League: Keane, Batty, Jones…