Now we know 2020 really is a crazy year: A Stoke striker tried a rabona 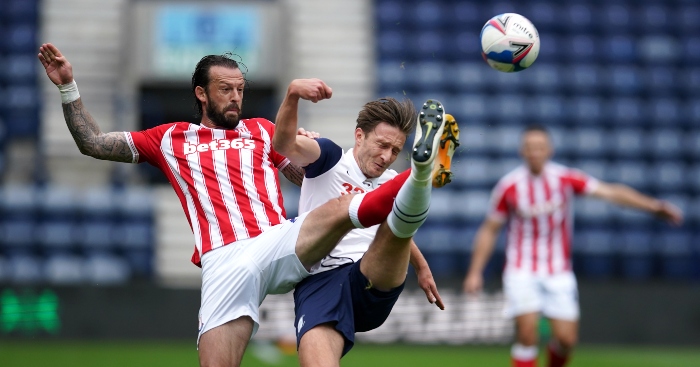 The year 2020, the events of which are destined to be poured over by academics centuries from now, can be best summarised by a line from a Smiths song – ‘has the world changed or have I?’

Nobody would have expected society to grind to a halt for months or for Piers Morgan to undergo a cautious public reinvention. However, perhaps the year’s most surprising development was a Stoke striker attempting to score with a rabona during a professional football match – and almost pulling it off.

Having spent four pretty successful years at Sheffield Wednesday, Steven Fletcher moved to Stoke City on a free transfer this summer. The Scot, these days sporting slicked-back hair, hipster beard and tattoos, increasingly resembles an Edinburgh high-street barber as he matures, but most casual observers would have him pegged as an ‘old-fashioned No.9’.

That, in fairness, does him a disservice – he’s actually very skilful, as evidenced by his brilliant flick to send Sam Clucas through on goal in Stoke’s 1-0 win at Preston on Saturday.

Still, this isn’t Neymar we’re talking about. He’s still a meat and potatoes, f*ck fun and stick the ball in the back of the net kind of striker. Or at least he would be in any other year. But 2020 is different.

The Preston defence, playing around with the ball in defence with the carelessness more suited to a Frank Lampard managed team, were robbed of possession by Stoke striker Lee Gregory. As the ball ran free, Fletcher, on his first start for the Potters, spied his big moment.

Faced with an onrushing goalkeeper, the 33-year-old rabonaed an effort that evaded the grasp of the Preston’s Declan Rudd. Time stood still as the ball travelled through the air, long enough for watching viewers to entertain the impossible thought: Is he going to pull this off?

Alas, life is rarely so simple. The moving ball thudded against the crossbar and bounced out of play. The EFL commentator called the attempt “absolutely outrageous”, which seems about right. It was certainly a surreal moment, like witnessing a crocodile playing the cello.

The reaction among Stoke fans can best be described as pragmatic disappointment. The promotion hopefuls were 1-0 up at a typically tricky away ground; even with a man advantage, the need for early season points outweighed the appreciation at Fletcher’s strike.

But Stoke fans have been having a pretty awful time of it for quite a few years now. Prior to the arrival of Michael O’Neill as manager, they’d gone 88 competitive games without seeing their side score three goals in a game.

They witnessed it eight times under O’Neill last season, including two four-goal and two five-goal hauls, but a 2-0 home defeat to Bristol City last weekend quickly brought any fans getting carried away back down to earth. There’ll always be days like that in the Championship.

So perhaps Fletcher thought they needed cheering up. OK, so he ultimately pissed them off instead and got subbed off two minutes later, but the potential reward definitely outweighed the risk as far as we’re concerned. It just makes the chutzpah of it even more glorious.

After much consideration I have decided I am absolutely fuming that Steven Fletcher tried to rabona a clear cut chance in rather than simply lacing it.

And Fletcher’s attempt at Goal of the Century revealed another home truth. Namely that even footballers who are perceived as unglamorous by the legions of keyboard warriors are capable of breathtaking pieces of skill far beyond the capabilities of you or I.

Also, with the year we are all having, it’s best advised to take our fun where we can. Marvelling at a Championship striker attempting a rabona is certainly that.