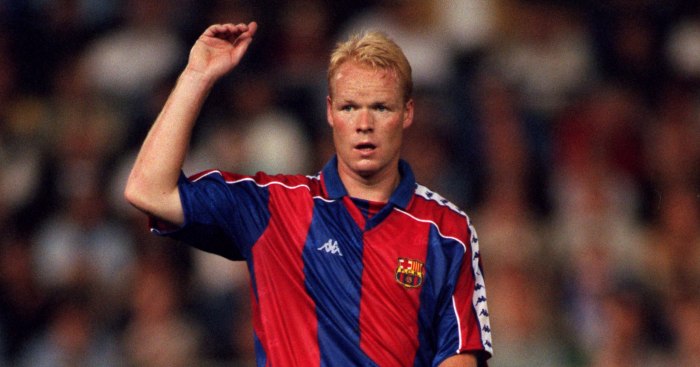 Ronald Koeman is likely to have a rather large in-tray to work his way through if, as expected, he is appointed as Quique Setien’s replacement as Barcelona boss.

Earning Lionel Messi’s trust may be the most important task at hand, but then there are the small issues of the majority of the squad being put up for sale, the expected departure of Eric Abidal, the club’s fourth sporting director in five years, and the political wrangling of beleaguered president Josep Maria Bartomeu for Koeman to get his head around.

Perhaps only then will he be able to get to work on the training ground, and whatever headaches the aforementioned issues may cause, on the pitch is where he will have his work cut out.

Hamstrung by spunking almost a billion euros over the last five years, Barcelona have been left with a disjointed squad of mid-tier players not fit to wear the shirt and ageing stars not fit for the rigours of elite, modern day football.

The chastening defeat to Bayern Munich highlighted Barcelona’s inability to deal with organised, hair-trigger pressing, both in their defence’s rabbit-in-the-headlights impression of playing out from the back and their midfield and forwards’ incapacity to counter-press.

How Koeman solves such problems remains a mystery. Given the advancing years of some of his key players, it might not even be possible. So if he runs out of options, we suggest he might as well think back to a goal he scored for Barcelona against Trabzonspor in the 1990-91 Cup Winners’ Cup.

The strangest thing about the goal is not the fact you could throw a blanket over six Trabzonspor defenders in their haphazard attempts to pressurise Koeman, but rather the fact the Turkish outfit had threatened to knock Barcelona out of the competition at the Camp Nou.

Having won the first leg 1-0 in Turkey, Trabzonspor made it 2-0 on aggregate by taking the lead after only seven minutes in Barcelona.

The goal only served to anger Johan Cruyff’s side, who promptly annihilated their opponents 7-2 on the night.

Just eight minutes after scoring Barca’s third with a trademark thumping free-kick that goalkeeper Vukasin Petranovic could only punch into the top corner, Koeman came up with his moment of ingenuity – and later completed his hat-trick with a second-half penalty.

Sure, Barcelona are unlikely to face such hilariously bad attempts at defending any time soon under Koeman, but, let’s face it, it can’t be any worse than anything they’ve tried in 2019-20.