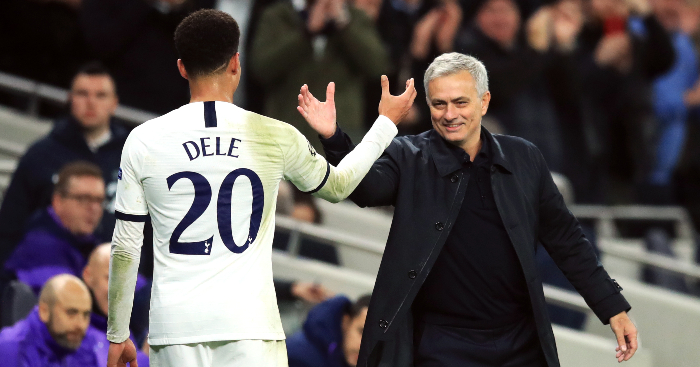 When Jose Mourinho arrived at Tottenham, he insisted he had learned from his mistakes. In just two games in charge, he’s given us a real sense that might be true – just not in the way we thought.

“I’m not going to make the same mistakes as before. I’m going to make new mistakes.” This is what the Portuguese said in his first press conference in North London. The difference, at least in his first two games, comes from the fact that he seems to be incorporating errors into his planning.

It’s something we witnessed at the Tottenham Hotspur Stadium during the comeback victory over Olympiacos. We hoped we’d get Mourinho 2.0 at some point, but we didn’t expect it to arrive so early in his reign.

With 18 minutes on the clock, and with Spurs already a goal down to Olympiacos, they switched off at the back and let Ruben Semedo stroll through to tap home a low corner.

Perhaps all that time living in a hotel made Mourinho forget the etiquette around letting someone into your own house and forced him to become too inviting, but this felt particularly uncharacteristic.

The old Mourinho was built on shutting teams down, with the prime example coming in Inter’s Champions League semi-final against Barcelona in 2010. The opposition weren’t taking chances because there weren’t many clear-cut chances to take.

Here, though, it was almost as if Spurs were deliberately making things tough for themselves rather than their rivals. As if Mourinho wanted to incept himself into building an attacking side, but still needed an imposition of urgency. By seeing his team go 2-0 down in such a manner, he had it.

There’s a caveat here, of course. Mourinho’s previous jobs have seen him take over in the close-season, affording him more than a few days to impose himself on a new set of players, and there will be at least some residue from Mauricio Pochettino’s management in this squad.

However, there’s also a feeling of him changing things just enough that he can then rip them down, revert to what made Spurs successful in the past, and frame it as his own doing.

Five minutes after the second goal, Mourinho withdrew Eric Dier and introduced Christian Eriksen in an unmistakably attacking move which prompted the chaotic energy needed to turn 0-2 into 4-2.

In Mourinho’s first season at Chelsea, his team was behind for 156 minutes in the Premier League. They were never two goals behind at any point in any competition.

In his second, the first figure doubled, but Middlesbrough were the only team to open up a two-goal lead over the Blues in the league. His Inter team were behind for 322 minutes in the 2009-10 Serie A season, behind by two goals for exactly one minute of the campaign, and behind for precisely 11 minutes of their Champions League knockout run.

The last few months at Manchester United planted the seeds of change, of course, with comebacks from 2-0 down to beat Newcastle United and draw with Southampton, but at the time we focused on the negative elements as signs he was losing his touch. That may well have still been fair at the time, but we’re starting to see signs he is willing to incorporate the mayhem rather than seeking to cut it off at the source.

We weren’t necessarily wrong about the decline of Mourinho in Manchester, but – after a year spent in thrall to a preposterously in-form David De Gea, could there have been an element of recognition that the kind of defending seen in his breakthrough years in England wasn’t just a dying art but an obsolete one?

It will surely pain Mourinho to surrender so much control and embrace chaos, but there’s nothing to be gained from hovering in the middle of the two. Indeed, in taking over a Spurs team in the middle of a season, and with hope but no expectation of a top-four finish, there’s a chance for him to test the theory. He can turn the chaos dial as much as he desires in a twisted game of trial and error, gauging the reaction of his audience before settling on Spurs’ final form.

Football moves in cycles, and perhaps we’re now moving back to an era of Ferguson-style relentless attacking at the first sniff of blood? Could it be that, by finding himself so far behind the last curve, Mourinho is ahead of the next one?

1 – Tottenham's 4-2 win vs Olympiakos was the first time ever a team managed by José Mourinho had come from two goals down to win in a Champions League game – he had lost the previous 13 games he’d been 2+ goals behind in. Spirit. pic.twitter.com/rkRK68qe5W

To build a version 2.0 you need enough reference to 1.0, keeping recognisable component parts to ensure it’s still yours, while creating distance. For Mourinho, this comes in the ability to make success about himself and failure the responsibility of others.

We might ultimately reach a new, Trigger’s Broom phase of Mourinho. One where he has veered so far from his original self without us noticing the extent of the transition.

When that happens – if it happens – we might want to look back at this game as the broom’s trigger.