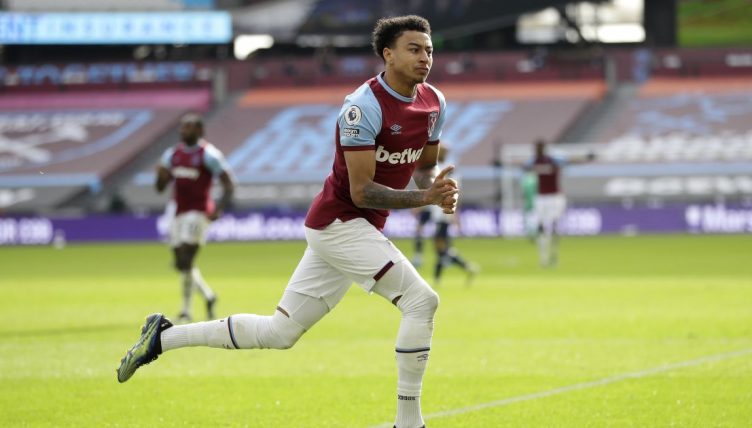 The renaissance of Jesse Lingard, from Manchester United bench-warmer to frontman of The Backstreet Moyes at West Ham, has been one of this season’s most heartwarming developments.

It may feel like another lifetime ago, but it’s not been that long since Lingard was curling one into the Panama net at the 2018 World Cup, cementing his reputation as a player for the big occasion.

His decline from that heady summer in Russia was pronounced. Lingard contributed no goals or assists across the entirety of 2019, lost his place in the England squad and was dropped from the United first team by Ole Gunnar Solskjaer.

The arrival, and sustained excellence, of Bruno Fernandes led most of us to believe Lingard was finished at Old Trafford. The deterioration of his form was met with glee across social media by sheltered dullards who viewed Lingard’s easy-go-lucky attitude to life with a veneer of jealousy.

Even the midfielder’s explanation of how family issues had affected his game was dismissed by those who believe money and fame are insulation against human emotion.

Yet Lingard has been a revelation since his loan move to West Ham in January. Whereas it was clear Solskjaer had lost faith in his player, restricting him to occasional appearances in the League Cup and Europa League, David Moyes has integrated Lingard into a winning team.

This responsibility has clearly made him feel wanted. After scoring twice on his debut at Aston Villa, only partially helped by the fact Emiliano Martinez was wearing his mum’s oven gloves that night, Lingard was instrumental during the Hammers’ win over Tottenham in the ‘We Hate Chelsea’ derby.

Displaying the work-ethic that made him a favourite under Louis van Gaal and Jose Mourinho, Lingard played with the energy of a possessed bowling ball to unsettle the Tottenham defence.

Dovetailing effectively with Jarrod Bowen and Pablo Fornals, West Ham were busy and efficient in attack. This can never be taken for granted – days of flinging Andy Carroll onto defences like a cow in a catapult are not too far removed from the present day.

Of course, hard running is nothing without any end product. Lingard’s match-winning goal, a sweeping shot after a piece of beautiful knee control, was finished with the aplomb of Sam Allardyce tackling a Gregg’s sausage roll.

"This is the Lingard of old for Man Utd and England" 💪

Jesse Lingard's goal was ruled out for offside, but VAR overturned the decision. ❌✔️

And the 28-year-old is clearly a likeable man. His popularity in the dressing room at Old Trafford was never in question and his infectious personality is rubbing off on his new West Ham team-mates judging by the resulting celebration.

As some unholy combination of events has resulted in West Ham challenging for the Champions League, Lingard seems destined to return to Manchester this summer. Solsjkaer wants the player to return and Lingard has expressed a desire to fight for his place at his boyhood club.

That speculation can wait for another day. Following a difficult couple of years, few would begrudge Lingard his current renaissance. After all, there’s nothing quite like a redemption story.

For now, it’s simply delightful to see him playing with a smile on his face again.