In the summer of 2007, fresh from reaching the Champions League final, Liverpool signed not one, not two, but three Hungarians. They didn’t make a single first-team appearance between them.

There is hardly a great history of Hungarians impressing in the Premier League – Zoltan Gera probably achieved the most success with West Brom and Fulham – yet, weirdly and somewhat remarkably, Liverpool have signed eight of the country’s footballers over the years.

They signed three in the space of a couple of months, all from MTK Hungaria, during a summer in which an official link-up between the two clubs was announced as the Reds looked for a way into an apparently emerging market.

Hungary’s Under-17 side had caught the eye at the European Championship the previous year, and with 14 of their squad on the books at MTK, the partnership seemed to make sense.

Unfortunately, it never quite paid off.

Goalkeeper Péter Gulácsi often acted as back-up to Pepe Reina and enjoyed some loan moves to Football League clubs, notably Hull City, but he left Anfield for Red Bull Salzburg in 2013 without ever getting on to the pitch for Liverpool.

Neither did Krisztián Németh nor András Simon.

Both strikers, Németh in particular was highly rated at the time, with Liverpool’s own website saying “big things are expected of Németh”, and like Gulácsi, who is now at RB Leipzig, he has gone on to enjoy relative success since leaving Liverpool for Olympiakos in 2010.

The now-29-year-old has 33 international caps to his name and is currently back for a second spell with Sporting Kansas City in Major League Soccer, while Simon is back in his homeland with Paksi FC, where he has found a home after a nomadic few years.

‘I wouldn’t change it for anything’

Now, more than a decade on, how do the two players look back at their experience on the books of one of the biggest football clubs in the world?

“It was amazing,” Simon says of first making the move to England. “It was January when they invited me to Melwood, and I didn’t believe it.

“It’s a very, very big team and when they told me I could go there I couldn’t speak. In the summer I moved there with Krisztian and that made it easier, I had somebody I knew already.

“To go from Hungary to Liverpool was a very big thing for us and for Hungary, but the club were so helpful.

“Rafa was always nice to us and that was a big thing for us. We always saw these great players on TV and suddenly we could go there and train with them.

“I had already signed, but I still couldn’t believe it. I was very motivated, I can’t explain how happy I was at the time, and I wouldn’t change it for anything. If I was in the same position again nobody could convince to me to go to this team or this team instead.”

Németh had other options at the time, but hearing Liverpool had firmed up their interest on the day they were playing in the Champions League final, it’s hardly surprising he decided to make the move to England.

“I had a couple of teams who wanted me,” he says. “I started to play in Hungary and Liverpool came to watch me a couple of times so that’s how I heard about it.

“My agent called me the day Liverpool played the Champions League final and said they were going to make an offer, I’ll never forget that.”

Understandably, Simon and Németh needed time to adjust following the move as teenagers thrust into life not only at a huge club but at one in a foreign country.

“I first went over to sign the contract,” Németh says. “I’d never been to Liverpool before, that was the first time.

“I needed a year or so to learn English, I couldn’t speak English at all so the first months were difficult. But from the beginning everyone was friendly and helpful, and we had an English teacher come to the club three times a week.”

On the training pitch, meanwhile, the two young strikers faced arguably an even bigger challenge.

“That was an unbelievable feeling,” Németh says. “You know you’re not the same level, but you don’t want to just look like a fan. I tried to do my best.

“I would be up front with Torres and Gerrard, but we had Mascherano, Hyypia, Alonso, Kuyt, Carragher, these incredible players,” Simon adds. “I still remember it like it was yesterday, you can’t forget these moments.

“I could learn from them, not just by training with them but by watching them. How they pass, how they shoot, how hard they work. It was an incredible experience.” 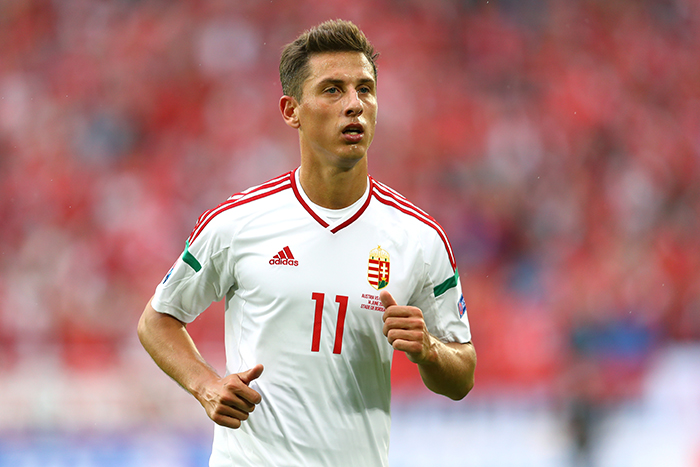 Unfortunately for the pair, their big break never came. Both suffered untimely injuries, Németh on his very first game out on loan at Blackpool, and looking back now he says “maybe it wasn’t destined to work out”.

“The first year was really good, we won trophies with the reserves so I stayed to try and fight for a first-team position,” Németh recalls.

“But I had a couple of injuries which came at very bad times for me. (At Blackpool) I just came back from injury, I had a couple of days there, I came on after 60 minutes, and the first goal kick I got an elbow.

“My cheekbone was broken in three places and I missed the next two to three months and the season was finished. It was a very unlucky few months for me. It was unbelievable.

“Then in the third year I went (on loan) to AEK. That pre-season was really good for me and if I’d had patience maybe I could have stayed and played in the first team, but I made that decision and I was happy there. I have some good memories from Greece.

“You can complain, but that’s how it goes, I wouldn’t change anything.

“Maybe it wasn’t destined to work out. Rafa left and then Roy Hodgson came in, a lot of foreign players left the club and it was clear for me I had to leave.

“Olympiakos paid the money Liverpool wanted so it was both mine and the club’s decision. They tried to bring more English players and more from the youth team like Dani Pacheco and those kind of players at the time.

“But I’m so thankful to Liverpool. I learned a lot, that was how I learned to live without my family. It was an unbelievable learning process, I had ups and downs, but it was still positive.

“The fans and the club are amazing.”