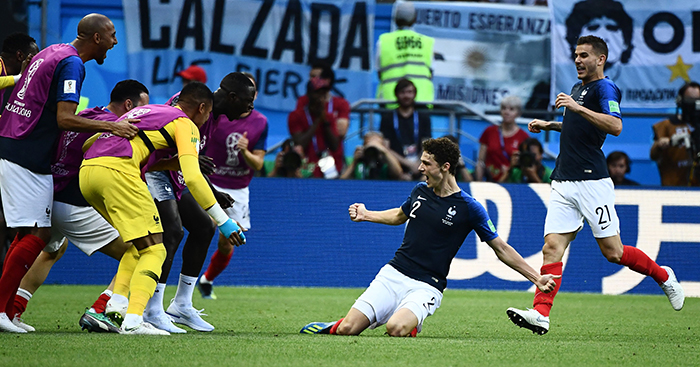 Everyone has already marvelled about Benjamin Pavard’s goal for France against Argentina, but it was just that good it deserves a step-by-step breakdown.

When Didier Deschamps decided to forego orthodox full-backs in favour of two men just as comfortable in the centre of defence, it wasn’t supposed to work out this way.

The France manager was far from the first to employ the strategy – Belgium’s Marc Wilmots was criticised for doing similar with Toby Alderweireld and Jan Vertonghen at the last World Cup – but he might be the first to have it work quite so well.

Not only did Lucas Hernández and Benjamin Pavard link up for one of the best goals of the World Cup so far, but they did so with the kind of play some were worried Deschamps had lost by omitting the likes of Djibril Sidibé and Benjamin Mendy from his starting XI.

The end result was a truly stunning goal, and one which invites a rewatch from as many angles as possible in order to pore over every little detail.

Each of the three main components of the goal may well see you pull back from the screen, disgusted at their perfection.

This World Cup has had its moments of individual brilliance, not least Ricardo Quaresma’s trivela against Iran or Ahmed Musa against Iceland, but this was both extremely simple in its makeup and impossible to get right without perfection upon perfection.

Pavard’s finish might be the star of the show, the framed portrait in the Louvre, but Blaise Matuidi’s pass to start the move is the work of a man finding a spot on La Rive Droite and deciding not only should it house art, but it must.

And just as you couldn’t imagine the museum anywhere else, the Juventus midfielder’s ball is so brilliantly deliberate that it finds the tiny sliver of pitch required to give Lucas space to cross while taking both Cristian Pavón and Gabriel Mercado out of the picture.

After previous generations headlined by the class of Zinedine Zidane, and with Dimitri Payet left at home after picking up an injury in the Europa League final, there might have been some concern about Paul Pogba being forced to bear the creative brunt in Les Bleus’ midfield three.

In future, we may need to ask Matuidi’s permission before making such crass assumptions.

Now, you’re probably preparing to tell me the cross from the left-back was overhit, that the goal was only possible because the ball sailed over the better-placed Olivier Giroud before falling at the feet of Pavard.

If this is you, I’d hazard a guess that you’re the kind of person who hated The Artist because there wasn’t enough talking, or who gave up on Tranqulity Base Hotel & Casino because it wasn’t just a repeat of the first Arctic Monkeys album.

Pavard’s goal, like any great art, is both the sum of its parts and more than that, and the depth of the cross is what transformed it from football-art into art-art.

It’s all about that silence, that moment the ball bounces inches away from the stray boot of Nicolás Tagliafico and our eyes shift right, suddenly aware of what’s coming and disbelieving of its possibility.

As with Nacho’s goal for Spain against Portugal, we don’t need to worry about the identity of the recipient: sometimes the set-up is so perfect we know what’s coming next.

It’s that split second before the start of a 100m world record attempt. It’s the fairway shot as it skips up and dances towards the hole. It’s the hang after the step of a triple-jump when it could be something.

Pavard could have gone for the objectively best kind of finish, the blast in off the underside of the bar, but he knows the moment requires a feather touch rather than a power drive.

Pavard, with his face like a royal puppy in a renaissance painting, knows it would be out of character to apply monster truck execution to a Vespa of a chance.

He cuts through the ball as if barely touching it at all, less knife through butter than pastry fork through crème pâtissière, but that’s what you need when you’re slicing through that heavy World Cup air before you even get to the ball.

Watch the goal in real time. Now slow it down and watch again. Somehow the speed hasn’t changed. You check back to see if you got the settings wrong, but you’re not at fault here.

Matuidi’s ball moves frame-by-frame, as does the cross from Lucas, but Pavard drags his foot back at the same pace. His full speed is our slow motion. He has picked up a beaker marked ‘laws of physics’, thrown it into a sack on the ground and trampled it to death.

The moment it hits the net, not a single eye in the penalty area is pointed the way of the Stuttgart man. It doesn’t matter that a second earlier he had yet to score for his country at any level, or that his only senior goals up until that point had been headers. Sometimes you just know.

You’ve seen Michael Essien’s famous goal for Chelsea against Arsenal, or Cuco Martina’s against the same opposition, and marvelled at how the ball began its journey outside the far post before creeping back in. This is far more subtle, being primed for the woodwork like a homing missile before spinning itself inward.

Watch it back and look out for Antoine Griezmann’s little jump as he realises what’s up.

It’s the movement of a kid coming downstairs on Christmas morning and twigging that Santa has delivered the present they really wanted. They might have suspicions their parents are the ones really responsible, but the origin doesn’t matter as long as the end result is the same.

When the next World Cup rest day rolls around and you’re at a loss for what to do, set 90 minutes aside to watch Pavard’s goal on repeat, from as many different angles as you can.

You might think it’ll lose a bit of its charm after repeated viewing, but just trust me.