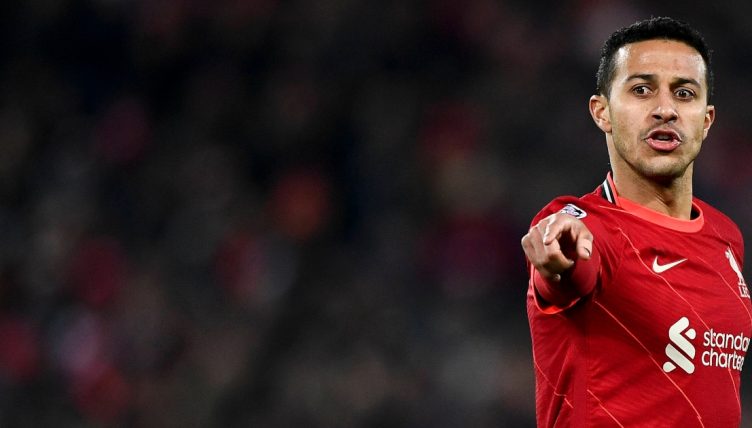 You’d think any player that’s part of a quadruple-chasing team would be starting to feel the pressure as immortality beckons – but most players aren’t Liverpool midfielder Thiago Alcantara.

Before Saturday’s win over Watford, a result that briefly took Liverpool to the top of the Premier League, Thiago insisted that he and his team-mates were relishing the final months of the season.

“The other day I was talking with some friends about it and I never had, in the years that I have been involved in football, a month so exciting like this with such important and exciting matches every three days,” he told Liverpool’s official website.

“For sure it is exciting because you are competing against the best, in the best competitions as well, but also because it reminds you that we are in finals.

“It looks like a World Cup, a European Cup, where every game is a final. With that, we are in a one-mission mood and we are there.”

In some ways, this kind of talk is to be expected. Thiago was hardly going to publicly admit to sleepless nights and lingering doubts as Jurgen Klopp’s side look to eclipse Manchester United’s treble winners of 1999.

But it’s one thing to talk the talk; it’s another entirely to display that calm in action. Yet against Watford, the Spain international put in a man-of-the-match performance to inspire Liverpool to their 10th consecutive Premier League win.

While Diogo Jota and Fabinho scored the goals, the latter from the penalty spot after the kind of tackle that belonged to the recently concluded Six Nations, Thiago was the fulcrum of Liverpool’s success.

He recorded an 85% pass accuracy, created three chances, won five tackles and made two interceptions. But one moment above all others acted as the knife of serenity cutting through the growing quadruple talk.

During the first half, when Watford were still diligently working towards the 0-0 that Roy Hodgson spent the previous night dreaming of, the 31-year-old received possession in the middle of the park and decided to make 50,000 jaws drop simultaneously.

Without a glance, look or any indication of what was to come, Thiago swept the ball first time into the feet of Curtis Jones. It was almost as if the ball had travelled there via GPS rather than human endeavour, and it was rightly greeted with astonished whoops from the Anfield crowd.

Forget that Jones, ignoring the presence of Roberto Firmino and Mohamed Salah, decided to hoick the ball into the stand.

If anything, the paucity of the shot only emphasised the sublimeness of the pass. It was the single act that reassured Liverpool fans that any nervousness surrounding the fanbase hadn’t transmitted itself to their players.

As the cold Saturday sun melted into darkness, and attention turned to double headers with Benfica and Manchester City, pundits and coaches fell over themselves to praise Thiago.

“The first pass you’ll see from Thiago is absolutely sublime,” said Micah Richards on Match of the Day. “He takes out three players with a pass. I mean, how has he even seen that? It’s just extraordinary.

“And he was doing his defensive work, stopping counter-attacks. Klopp was applauding him for his work.”

The Liverpool boss was equally effusive during an interview with talkSPORT. “He was unlucky with injuries and stuff like this at the start, but when he is fit he can give the game a real rhythm,” Klopp said.

“He’s got an eye for that, he calms the game down in the right moments, he has a sensational overview of the game.

“I saw that a lot in football games, too, I just didn’t have the feet to use it. So thank God he does! I can imagine you enjoyed it, I did as well.”

But Saturday’s performance was exactly what the midfielder was brought to Anfield to do. During a high-pressure occasion, Thiago exuded calm and maturity and used his experience to dictate the game.

While his gorgeous no-look pass sucked any latent tension from the Anfield air, turning anxiety into awe-inspiring whoops in an instant.

You imagine Liverpool will need more moments like this as each game becomes increasingly important. But, with Thiago on the scene, they have a player who serenely cuts through all that outside noise.

And, despite football’s obsession with money, qualities like that are priceless.