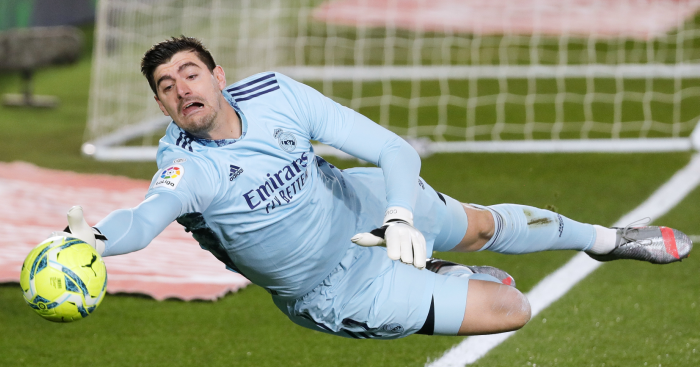 Thibaut Courtois has had his critics at Real Madrid, but his last-minute save against Athletic Bilbao was worth more than a goal.

Context is key here. When Courtois signed for Los Blancos in 2018 following a successful World Cup with Belgium, it was assumed Real were signing one of the world’s best goalkeepers.

Alas, there have been plenty of moments over the past two years when Courtois has been a mere step away from the latest calamity, like Sideshow Bob attempting to avoid an upturned rake while blindfolded.

While Chelsea fans have watched his travails with a family-sized bag of popcorn served with an industrial dollop of relish, there’s been something quite sad about watching an elite sportsman become a figure of ridicule.

These lazy assumptions of decline have been exaggerated. While Real Madrid are gently meandering down the mountain after the peak of three straight Champions League wins, turning back to Zinedine Zidane in the hope he can rebuild the side, Courtois remains a world-class performer in a side that has slipped behind the likes of Bayern Munich and Liverpool.

After an inauspicious trophyless first season in the Spanish capital, he’s been performing at a level worthy of Iker Casillas’ No.1 shirt for the past 18 months now.

Aged 28, still relatively young for a goalkeeper, there is every chance he could retain the No.1 shirt for at least another half-decade.

Of course, it helps Courtois retains reflexes that would make a cat jealous and a positional sense that we’re legally obliged to describe as GPS controlled.

All of which would be needed as Real dangled their legs over the precipe in time-honoured fashion. During their La Liga match against a dangerous Bilbao side, in which Zidane’s side had done well to be leading 2-1 as the clock ticked into injury-time, the visitors launched one last attack.

After a neat one-two, Yeray Alvarez released an immaculate through-ball that dissected the Real defence.

With only the keeper to beat, Mikel Vesga couldn’t believe his luck. Neither could Real; Vesga has scored one goal for Atheltic Bilbao in four years. But that should not detract from the brilliance of Courtois’ save.

Making himself big like a peacock with a point to prove, Courtois stuck his left arm instinctively above his head and batted the shot away. In a season that has redefined the word tumultuous, its significance to Real should not be understated.

Brilliant stop by Courtois to preserve the lead at one end and then Benzema goes straight down the other to extend it! 🔥

Having breathed a lung-emptying sigh of relief, Karim Benzema secured the points for Real with the game’s final kick. Luka Modric may have played the last pass, but the assist should go down as Courtois’.

Wonderfully, Zidane reacted in the manner of a man who’s just discovered his connecting flight has been cancelled.

With Real determined to play Russian Roulette with themselves and their supporters, presumably to make life more interesting, they will need Courtois to continue pulling off saves that are worth more than their weight in goals.