*This* goal, not that goal, proves Bernardo Silva is the PL’s best player 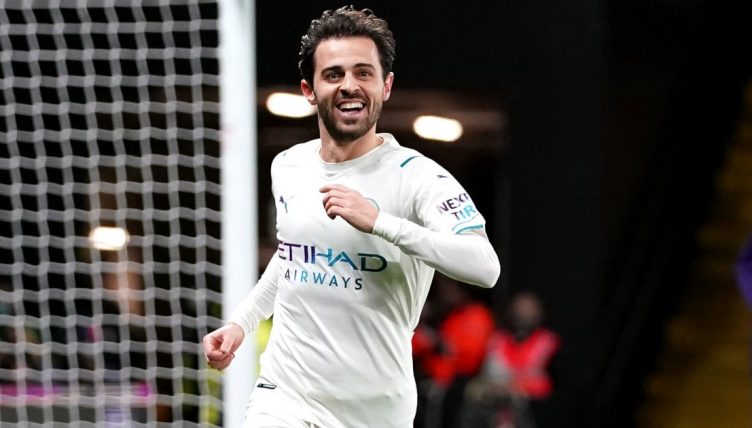 It’s getting to that point in the season managers dread. A chockablock November is already weighing heavy in the legs, the Hectic Festive Scheldule™ lies just over the brow of the next hill.

On Saturday lunchtime, Chelsea played West Ham and tiredness told. Mistakes were as abundant as Quality Streets at Christmas, some players already looked like they were running through bread sauce. Kai Havertz, Ben Johnson and Kurt Zouma all went off injured.

It looked like we were in for an attritional, wild, unpredictable weekend of Premier League football.

And then Bernardo Silva danced onto the Vicarage Road pitch at teatime and made the depths of English football’s midwinter look like a summer afternoon stroll in the park, kicking any ideas about fatigue-induced upsets into the long grass.

After his perfectly controlled but unstoppably powerful goal-of-the-season-contender volley gave City a win over Aston Villa in midweek, Pep Guardiola was asked where Silva ranks among the Premier League’s array of wonderful players. “He’s the best,” the Catalan coach replied.

When Silva skipped out to face Watford on Saturday afternoon, he looked and played like a man intent on proving his manager right.

And though it was Silva’s second-half goal that made headlines – that beautiful, curling strike to put City 3-1 up – there were two moments in the first half that showed in perfect sharp focus why Guardiola was so confident in his assertion.

From the off, City were in complete control. Of course, there is a greater disparity between them and Watford than there is between Chelsea and West Ham. But City always looked capable of more had it been required.

They drew Watford into a press, then sliced through them like a katana through candy floss – and the pointiest, most lethal bit of their blade was always Silva. He floated around, looking elegant and effortless, then got the ball at his feet and was viciously destructive.

In the third minute a long, crossfield ball went out towards Raheem Sterling, Danny Rose intercepted, but in his efforts to clear, Rose fell on his backside and gave the ball straight to Kyle Walker.

Silva demanded the ball and swept a perfect pass to Phil Foden, opening up the pitch. Then Foden’s cross found Raheem Sterling unmarked at the back stick as Rose continued his season-long tribute act to Gary Neville’s performances for Manchester United in 2010-11. One-nil City. Game over, four minutes in.

Twenty-five minutes later, after a slew of City chances, came Silva’s moment to get on the scoresheet himself, to prove that he has become killer as well as creator.

Another attack went through him and he slipped Ilkay Gundogan in to score. When Gundogan’s shot came back off Daniel Bachmann and fell at Silva’s feet, he thought, ‘Well, if I must.’

Silva skipped around William Troost-Ekong and then around Gundogan and looked certain to cross. As Bachmann dived to stop that certain cross, he slid it in at the near post.

So simple, yet so intelligent and so brutally effective and in many ways more impressively unpredictable than what followed in the second half, proof that Guardiola was not wrong to say what he said. It was also Bernardo Silva’s fifth goal in his last eight City games – as many as he managed in his previous 61.

So, the best player in the league? There are a few on Merseyside who might disagree. But that you could barely get a cigarette paper between Mohamed Salah and City’s one-man midfield control centre is as high a compliment as you could pay at the moment.

Comparisons are perhaps a little futile anyway, as Guardiola himself conceded when discussing the Ballon d’Or. Salah is certainly a more explosive spectacle, more edge-of-your-seat thrilling. But Silva is more complete, more rounded, effective over a greater portion of the pitch.

We all love Bernardo Silva 💙 pic.twitter.com/FXnriWQlI7

When City are out of possession, he joins the centre-forward – Jack Grealish on this occasion – in leading the press. In the build-up phase, he drops deep to receive the ball from his centre-halves or Rodri. When the ball is worked out wide, he bursts beyond the striker and into the six-yard box. ‘Allfielder’ might be more appropriate.

On Sky, in the post-match analysis, Jamie Redknapp sat enthralled by what he’d seen. “He’s running the show and it’s a joy to watch,” Redknapp said. “He’s got everything. He’s so comfortable on the ball, he sees every single picture.”

To think that City were reportedly happy to include Silva in a cash-plus-player deal to tempt the goal-shy Harry Kane to the North West as recently as August is quite remarkable.

Since September, with Kevin De Bruyne struggling for form, the diminutive Portuguese has been their standout player and the league’s dominant midfielder – the perfect on-pitch conduit for the Guardiola ideology.

When we used to talk about dominant midfielders, what we expected was the big, strong, athletic type. Yer Gerrards, yer Vieiras, yer Keanes, yer Toures. Now the landscape has changed, moulded by Silva’s predecessor and namesake David and by the man in the City dugout.

For some time after David Silva’s 2020 departure, we wondered who might replace him. We wonder no longer.

“We know how tough it is to win the most competitive league in the world,” Bernardo Silva said post-match. With his recent showings, he’s made it look quite the opposite.

Can you name Man City’s XI from the CL semi-final v Real Madrid, 2016?