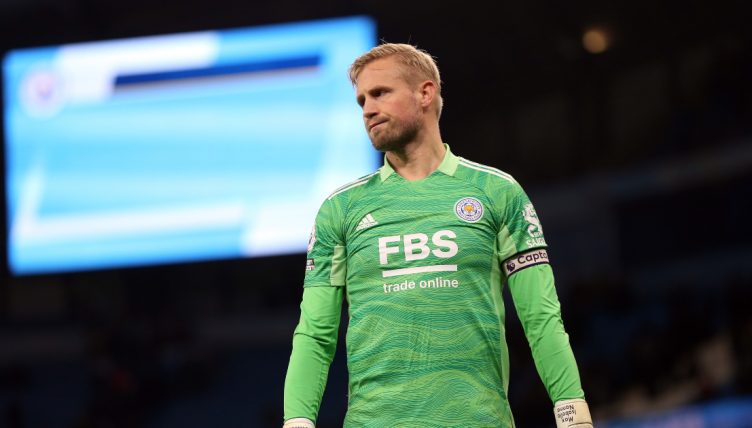 Imagine you are in goal for Leicester in the Premier League and your defenders have just given Mo Salah, one of the finest footballers in the world, a golden opportunity to open the scoring for Liverpool.

Some comical defending has just led to the ball bouncing perfectly into the path of the Egyptian who now turns to shoot at point-blank range, and it’s your job to somehow stop it.

Oh, and by the way, your defence has been giving away these types of chances all season long and you already had to bail them out earlier that game by saving a penalty from Salah.

That is the situation Kasper Schmeichel faced in the 31st minute of Leicester’s 1-0 win against Liverpool.

But, not for the first time, he proved himself one of the most mentally fortified goalkeepers in the league.

When Daniel Amartey headed the ball onto the unaware Luke Thomas and into the path of Salah, Schmeichel must have thought, at least for a brief millisecond, ‘Not this shit again.’

Be it from set-pieces, simple balls over the top, or just basic mistakes, Schmeichel has had to watch his Leicester City defenders fumble and stumble in front of him.

He has succeeded in bailing them out many times, but it would be impossible to do so on every occasion.

Yet against Liverpool, he was as good as his father ever was.

When Salah was gifted the clearest chance of the match, Schmeichel dropped down low to meet the Egyptian at a moment’s notice, eagerly excepting the duel.

Salah went high but accurate, attempting to lift the ball over and past Schmeichel with a shot that wrapped his left foot around and under the ball.

But the Dane was more than equal to it. Fully awake to the prospect of a sudden chance, he instinctively reacted to the mistake from his defenders and stepped towards Salah.

Like a terminator, his vision had identified the nearest threat and his robot-like brain activated the code to start emergency procedures.

Falling to the floor, he watched as the ball went over him. He clawed at it with his right paw and, getting the barest of touches, he sent it over the bar.

It was one of many moments throughout the match in which Schmeichel showed his psychological fortitude and sheer resilience despite the challenges his side have faced all season.

There was the penalty of course, which Schmeichel read well to repel Salah’s effort.

Research? No, pure instinct, he claimed after the match.

“Not at all,” he said when asked if he had studied for the pen. “I had a feeling, I went with it.”

The win, he said, came down to the side’s mental strength.

“It’s a credit to everyone, to our mentality. We haven’t had it our way this season, but the thing we always characterise ourselves with is we don’t give up, we keep going.”

No one has embodied that more than the Leicester captain, who has time and time again saved his fractured defence, which has not been helped by a flurry of injuries.

Feelings and prayers contributed to Kasper Schmeichel's penalty save against Mo Salah 😂 pic.twitter.com/dn0zaeHZNM

But beyond this season, Schmeichel has had to have a strong state of mind all his career.

Inevitably compared so often to his father, he has overcome the early criticism from his time at Manchester City to do things the hard way.

He escaped his father’s legacy by leaving City for Notts County, before climbing the leagues and reaching the very pinnacle of English football with Leicester.

In turn, his mentality has seen him create his own legacy with Leicester.

If they are to do anything this season, they will need him more than ever.