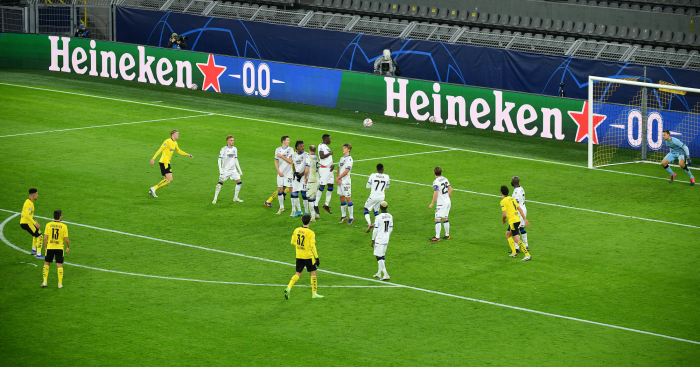 As if being monstrously talented is not enough, last night Jadon Sancho saw fit to show off his free-kick prowess, leading us to ask: is there anything he can’t do?

Some people have all the luck. By the age of 20, we would have settled for getting out of bed before midday and talking to girls without breaking into a sweat.

Sancho is wired differently. Known for his trickery, pace and use of feints in one-on-one situations, the Borussia Dortmund winger is widely regarded as one of the best young footballers in the world, finishing fourth in the recent 2020 Golden Boy awards.

Fitting like a glove into Dortmund’s team of youthful tyros, expectations surrounding the England international are typically sky-high. Luckily, Sancho looks like he’s worth every ounce of the praise.

For all of his myriad talents, free-kicks aren’t necessarily the first thing that spring to mind when thinking about Sancho. This isn’t necessarily a bad thing – there have been many examples of players being selcted for their set-piece ability alone, rather than their all-round performance.

With Sancho, his aptitude at striking a dead ball simply adds another dimension to his game.

During Dortmund’s Champions League match with Club Brugge, the home team won a free-kick around 25 yards from goal.

Puffing out his cheeks as if about to disarm a car bomb rather than strike a football, Sancho proceeded to whip a beautifully flighted shot into that section of goal that even a three-armed goalkeeper would be unable to cover.

Sancho puts a free-kick in the definition of top bins. You don't save those! 🎯 pic.twitter.com/oE8jCed884

Now that Sancho has illustrated his Beckham-esque free-kicks, maybe its time to find out his limitations as a footballer.

Can he dribble with his shoelaces tied? Can he simultaneously score a hat-trick and serve bratwurst to the inhabitants of the Sudtribune? Can he do it on a wet night in Burnley?

For now, we will simply have to express amazement whenever Sancho proves fallible.

Something tells us we might be waiting for a long while yet.