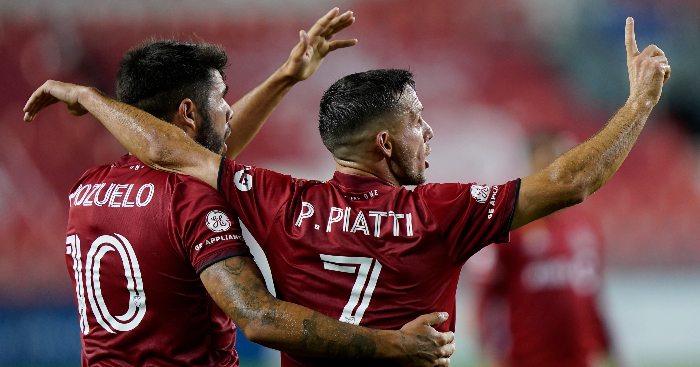 With Thierry Henry watching on from the sidelines, Toronto FC might have felt inspired to try imitate some of his best work against his side, their major rivals Montreal Impact.

An intelligently-timed run, perhaps, or maybe the most delicate of touches to control a looping through-ball, before an exceptionally well-placed finish into the far corner.

But this is MLS. Toronto’s first-choice centre-forward is Jozy Altidore. With all the respect in the world for a quickly-improving league and blossoming football culture, we’re unlikely to see anyone match prime Arsenal-era Henry.

Yet in Toronto’s 0-1 home defeat to Montreal Impact, we were treated to a moment that couldn’t help remind us of the legendary Gunners forward in his pomp.

Unfortunately for them, it was a moment of infamous calamity and clumsiness that was antithetical to Henry’s famously ice-cool image.

In fairness to Toronto, their tribute to his and Robert Pires’ cheeky penalty trick didn’t go quite as disastrously as the French duo’s attempt against Manchester City back in 2005.

That incident, of course, saw the two Frenchman get their wires totally crossed. Pires failed to tee the ball off and Henry ran beyond it, looking as bewildered as a pitch-invader that finds their way past the hoardings without an idea of what to do once they make it.

It went just as bad as the original 🤣 pic.twitter.com/3RlDCavp5V

For a few seconds, Toronto thought they’d mastered what Henry and Pires failed at. It’s perfectly legitimate if you pull it off. Johan Cruyff once did it. Lionel Messi and Luis Suarez combined to do it against Celta Vigo a few years ago.

On first glance, there looked to be little wrong with it. Alejandro Pozuelo teed it off well, and former Valencia winger Pablo Piatti finished emphatically. They even had a chance to celebrate.

But the referee’s whistle soon blew, the goal was chalked off, and Henry’s men were awarded a free-kick. Piatti had gone a little too soon and encroached into the D when Pozuelo had passed it.

It wasn’t quite City right-back Danny Mills calling Pires a “f*cking tw*t” for the audacious attempt, but the co-commentator didn’t sound at all pleased.

“A disgrace,” he said. “What are you even thinking? Just take the penalty properly.”

The message, essentially, was this: don’t be a smart-arse. A lesson Henry learned himself 15 years ago.

“It was Thierry Henry’s idea and of course it was my mistake, because I missed the ball,” Pires later told SportBible.

“I regret the pass but not the penalty. It was a good idea, the people need to watch something new and the penalty between me and Thierry was a new thing.

“Sometimes in football, I know it was a big mistake, but sometimes you need some fantasy on the field. For me, it was a good fantasy but unfortunately I missed the pass but it was a good idea.”