No amount of money will stop ‘meg king Ndombele humiliating you 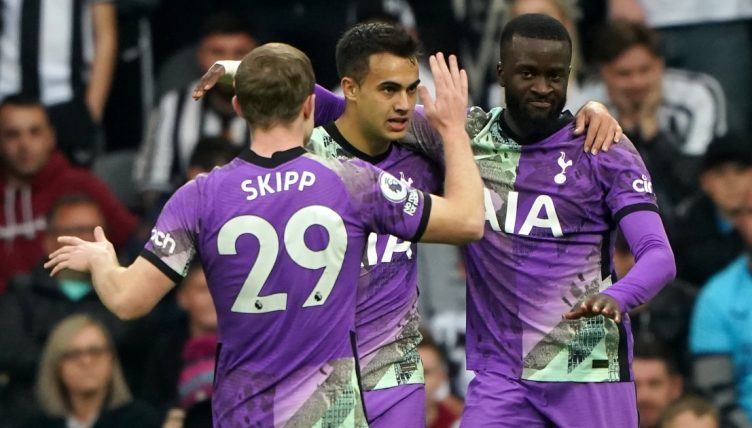 Going into Newcastle United’s game against Tottenham Hotspur on Sunday afternoon, it was all Saudi Arabian headdresses, celebratory #cans and a new wave of hope.

By the time Tottenham had left St James’ Park following the Saudi Arabian Public Investment Fund’s (PIF’s) first game as Newcastle owners, there was plenty of despair coursing through the stadium as the Magpies were on the wrong end of a 3-2 scoreline.

While Harry Kane stole the headlines with a neatly taken goal and assist, Tanguy Ndombele is arguably the man who contributed to that drab feeling the most.

For starters, the Frenchman equalised with a clinical strike after some admittedly poor defending from Steve Bruce’s defence.

But that goal was nothing compared the humiliation he would inflict later in the game with a bit of skill that left Geordies – and particularly Jonjo Shelvey – with a taste in their mouths so bad that not even Newcastle Brown Ale could mask it.

Despite his reputation, Shelvey was actually last sent off in December 2017 after getting a second yellow in the 95th minute during a narrow loss against Everton.

However, the 29-year-old marked what was supposed to be the start of a new era by reverting back to type and losing his head – and we blame Ndombele.

With the score still at 3-1, Son Heung-min backheeled the ball to his French team-mate as Spurs looked to protect the ball deep in their own half.

To collect the pass, Ndombele’s only option was to nutmeg Isaac Hayden, which he did with outrageous composure before dangling a leg in the air, playing it to Sergio Reguilon and collecting the Spaniard’s dinked return with a masterful touch.

Still completely unfazed, the Tottenham midfielder stood up Javier Manquillo and passed the ball past him, before getting it back to his feet with a certain Shelvey facing him.

There was absolutely nothing the Newcastle midfielder could do, and as Ndombele effortlessly shifted the ball one side of him and ran around the other to collect it before passing forward, Shelvey lost his head and kicked the Frenchman up in the air.

While it was little more than an inconvenience for Tottenham’s nutmeg king, it was the beginning of the end for Shelvey, who received his marching orders after bringing down Reguilon as the Spaniard broke up the pitch five minutes later and just 23 minutes after he’d come off the bench.

Plenty of Newcastle bubbles were burst in those moments, with a late Eric Dier own goal far from enough to change that.

You can have all the money in the world, but if he wants to, Ndombele is still going to find a way to embarrass you and your players.

Go through our archives and you’ll find various videos of Ndombele tearing those who face him apart, including Stade Rennais’ Hamari Traore, a trio of Aston Villa defenders and even his own team-mates.

There was nothing to suggest that Newcastle’s change in ownership could avert him inflicting that same fate on somebody in black and white – especially as none of that Saudi money has actually been spent on bringing in new players yet.

Newcastle are still searching for their first win this season, having been beaten in the EFL Cup by Burnley and only drawn on the three occasions they’ve avoided defeat in the Premier League.

Steve Bruce’s side will be looking to finally change that in their tenth game in all competitions when they face Crystal Palace on Saturday, but Shelvey won’t.

Instead, the former England midfielder will be left to sit and think about what he did during his suspension; a process that is likely to mostly revolve around cursing Ndombele’s existence.

When January comes around, we imagine that Newcastle will be more than happy to splash the cash as they aim to force their way up the table.

However, for now, they’re left in the knowledge that no amount of money could stop Ndombele from embarrassing them in PIF’s first game.