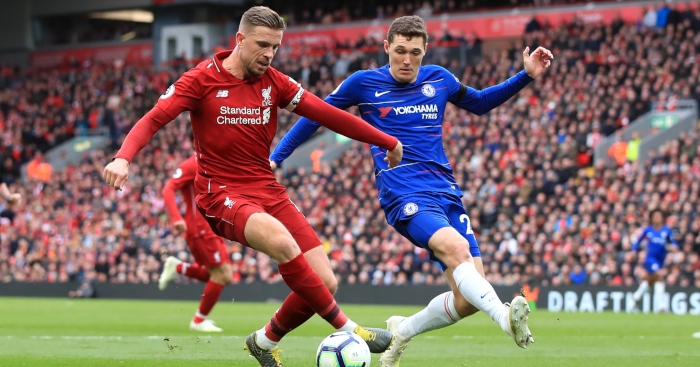 When Liverpool lost at home to Chelsea in 2014, surrendering the Premier League title in the process, Jordan Henderson was watching on frustrated from the sidelines.

Henderson was sent off in the closing stages of the 3-2 victory over Manchester City, a result which had looked at the time like it would be enough to guarantee Liverpool the league, ruling him out of matches against Norwich City, Chelsea and Crystal Palace.

If the former Sunderland man was ever going to miss the 2019 edition of the same fixture, it would have to be down to Jürgen Klopp deciding he was the wrong man for the task at hand. And, on the strength of his recent performances, that was never realistically on the cards.

Henderson played his part in Liverpool’s strong end to last term, captaining his team in the Champions League semi-final victory over Roma and leading them out against Real Madrid in the final in Kiev.

However, with the arrival of Naby Keita and Fabinho over the summer, both at a significant cost, there will have been some who wondered whether the 28-year-old would be as crucial to his team’s success this season.

If Henderson could sense those doubts, though, he was hardly worried, and his display in the potentially crucial victory over Chelsea at Anfield on Sunday is proof of that.

Liverpool have already surpassed their 2013-14 tally of 84 points with four league games remaining and are just one shy of Manchester City’s title-winning tally of that season.

The Chelsea game was supposed to be the most likely stumbling block, but two goals in three minutes – the first laid on when Henderson found an unmarked Sadio Mané, who was free to head home at the far post – ensured the pressure is now back on Liverpool’s title rivals.

The control and calm is in direct contrast to the wild challenge on Samir Nasri back in 2014, an over-the-ball lunge as reckless as it was unnecessary, and in a sense it lays out the difference between this Liverpool title charge and the one which fell short in 2014.

Back then, there was a sense that Brendan Rodgers’ Liverpool had got as far as they had through a sheer refusal to take their foot off the gas, starting games with blistering speed and blowing teams away before they had the chance to settle.

Now things seem different. If it’s reductive to call Klopp’s Liverpool a mentally stronger outfit than the Rodgers generation, it at least seems fair to say they’re less afraid of overthinking things. That defeat in 2014 came from panic in the face of the usual approach bearing no fruit, but the only message offered by a similarly slow start in 2019 was that the Reds needed to keep at it and the breakthrough would come.

Liverpool have picked up just two red cards this season, both for second bookings, and that tells its own story of a reluctance to rush in in an effort to force the issue.

Five years ago, there was the added issue of more defined roles in the Liverpool midfield, with Henderson and Steven Gerrard playing deeper than Philippe Coutinho in a three.

And even back then, Gerrard sensed there was a more suitable role for Henderson in the team.

“I thought it was a waste of Jordan’s best attributes because his game is based on energy and bursting forward. He’s happy to go box to box,” Gerrard wrote in his autobiography.

“In choosing to play him in a sitting role I felt we would be forcing him to be much more subdued.

“I would have liked us to have taken the shackles off Jordan and let him power forward while I held the formation together as the lone pivot.”

Henderson still does find himself sitting deep at times, depending on who is chosen to play alongside him, but Fabinho’s selection against Chelsea allowed Henderson and Keita to contribute more higher up the field.

This kind of fluidity ensures it’s harder for any Liverpool midfielder to go into cruise control, and this requirement to be always on was what allowed Henderson to take the bull by the horns on Sunday.

In not being required to do everything, he has been able to squeeze out more from himself, while always being able to offer that bit extra in those moments when his colleagues might be struggling.

Liverpool aren’t over the line in the race for the Premier League title – indeed, they’re far from it – but if they fail to win the league in May it will be through no fault of their own but rather because their closest rivals are one of the best teams in the history of the competition.

Jordan Henderson is one of just a couple of players remaining from the last title charge, but the way he and his role have changed over the course of five years is emblematic of the Reds’ own growth over that period.

He might be less indispensable than the last time Liverpool launched a serious title charge, but that doesn’t make him less of a player. In fact, the opposite is probably true.