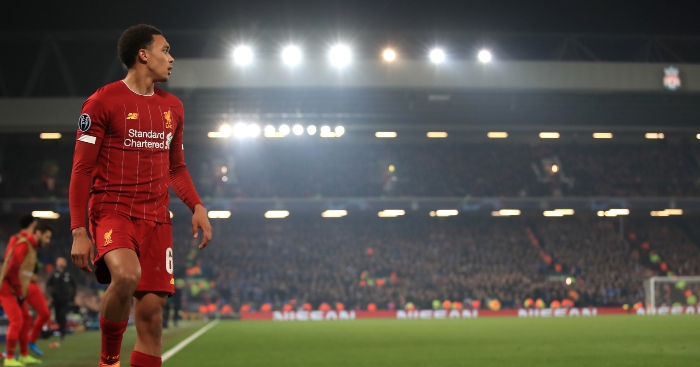 Before he became an all-conquering midfielder, Steven Gerrard was doing his best work from right-back. Liverpool defender Trent Alexander-Arnold could well be ready to go down the same path.

Gerrard played at right-back for club and country before developing into the player we knew him as for most of his career, and plenty have suggested Alexander-Arnold is more than capable of making a similar switch.

However, for the time being, the 21-year-old seems happy to make big contributions without leaving his defensive berth – something he has shown recently against both Aston Villa and Genk in the space of just a few days.

“Though on paper [a switch to midfield] seems a mouth-watering prospect, it is worth noting that this could potentially alter the creative freedom bestowed to the youngster… because Klopp favours his side building attacks down the flanks and taking more risks in these wide areas,” Liverpool.com’s David Alexander Hughes recently wrote of the Reds’ No.66.

This was an issue at times with Gerrard, too: the captain did plenty of good in his central role, of course, but there were undoubtedly moments where his creativity and ambition put his team-mates in unnecessary trouble.

At this moment, too, Alexander-Arnold has shown he has little need to move further up the pitch or further into the centre to influence games, as we saw with one of the most visually satisfying passes of the season at Villa Park.

We wouldn’t put it past him to have studied every single camera angle on Premier League broadcasts simply so he can play passes which look better than any other, and this ball out to Andy Robertson fits the bill. It’s the pass equivalent of the sweeping shot as a blockbuster director pans into a new locale.

You can’t even show this pass to young footballers to give them an idea of how do play, because they’ll be unable not to repeatedly rewind and replay the delivery as drool drips from their watching face.

In David Foster Wallace’s novel Infinite Jest, much of the narrative centres around a film considered so entertaining it leaves viewers in a state of effective stupor, unable to wrest their eyes from the screen to the point that they die with glee etched across their face. Alexander-Arnold’s pass to Robertson is the closest we’ve seen to such a thing in the wild.

Ridiculous pass from TAA to Robertson. What a player! from r/LiverpoolFC

Not that he lacks other gears, though, as we saw against Genk.

An ability to send an inch-perfect ball on a 60 or 70-yard diagonal isn’t to be sniffed at, but it’s undoubtedly the sort of thing he’ll practice every day in training, making it that little bit easier to execute without any immediate pressure.

However, Alexander-Arnold has also shown he can deliver at greater pace, when his speed of movement ought to make mistakes more likely.

He barely has a second to twist his body to find the angle to reach his team-mate, with Genk players closing him around the halfway line and looking to block out the recipient of the pass half a pitch away.

It’s as if he has made his mind up that he’s only allowed to pass to one player, as a sort of test to himself. He’s graduated his ‘top passer’ module and is now pushing for extra credit, as if that’s what will give him licence to spend entire games in midfield.

Want a fast delivery? Trents the man for the job from r/LiverpoolFC

Alexander-Arnold’s long-passing style has been compared to both Gerrard and Xabi Alonso by fans, and the suggestion of a move higher up the pitch would likely have gained even more support were it not for the depth of talent already on Liverpool’s books.

It’s worth noting, though, that one of that number includes Fabinho – a man who spent plenty of time at right-back earlier in his career.

The Reds team-mates might have different talents, but there’s nothing to say these can’t be complementary rather than in competition with one another, and even Alexander-Arnold himself has hinted at a future in a different position.

The Gerrard comparisons are no coincidence, with the youngster saying in October: “Everything about his game I really admired. I always studied him and wanted to be like him”.

He’s already well on the way, and the only question is whether he even needs to move up the pitch to do his best work.