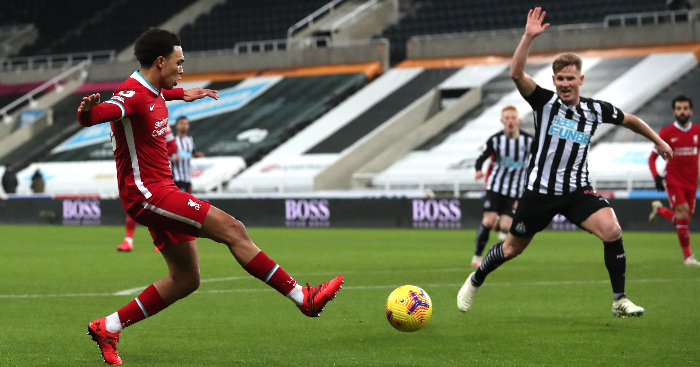 Liverpool didn’t produce the performances expected of them against West Brom and Newcastle, but players like Trent Alexander-Arnold are still capable of lighting up the dullest affair.

Having played some truly scintillating football to thrash Crystal Palace 7-0 in their final match before Christmas, many predicted Jurgen Klopp’s side to steamroller past the Baggies and Magpies.

But instead they were flat, drawing 1-1 and 0-0 respectively, lacking their usual zip in possession and incision in the final third against two sides that collectively shipped 10 goals to Leeds United.

There are few positives Liverpool fans will take from dropping four points against bottom-half opposition, but it’s a mark of a great side that even on an off-day, Alexander-Arnold can produce a moment like this to serve a reminder of how good they can be.

Receiving the ball just before the halfway line, he takes it down with minimal fuss before pinging a crossfield ball, slicing through a small gap in the Newcastle backline to find Sadio Mane, receiving the ball without having to break his stride on the edge of the box.

Right, we know what you’re going to say. And at first we thought it too: he gets lucky; there’s no way he meant that.

He’s aiming for Roberto Firmino but wildly overhits it over the Brazilian’s head and it’s just jammy that it evades the opposition defenders to find another one of his team-mates.

It’s a perfectly reasonably viewpoint. Certainly if the tables were turned and this was DeAndre Yedlin – or pretty much any other Premier League full-back – we’d chalk it up as a moment of good fortune.

But this is Alexander-Arnold, who produces this kind of witchcraft on a regular basis, who set a new record for assists in a season by a defender in 2018-19 with 12 and went one better last term. Have you seen him cross a ball?

This is Xabi Alonso and David Beckham rolled into one, playing at full-back, adapting to the gegenpressing football of 2020.

Don’t believe us? Watch this.

This clip is from Boxing Day 2017, when the Liverpool academy graduate had only just turned 19 and was still establishing himself in the first team.

Just watch. There’s no luck in this one. He’s still a teenager with the vision and technical ability to play a pass that few footballers on the planet would even dream of, let alone pull off, cutting through Swansea’s back four with laser-guided precision.

The kid is magic. Just believe it. There’s no other explanation.