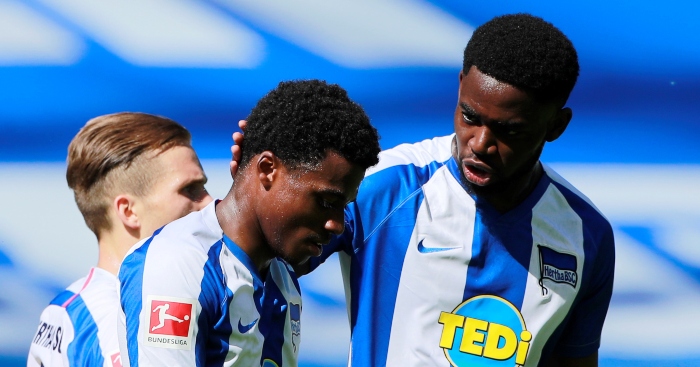 The return of Bundesliga football has treated Hertha Berlin better than most clubs, and their players are leaning into it to have a lot of fun.

We’ve already seen Matheus Cunha demonstrate his skill with the ball and disrespect for those without it, and against Augsburg it was the turn of Javairo Dilrosun.

The midfielder scored his first goal since way back in October, but the way he took it made you think he was scoring so many the mere act of putting the ball in the net had become boring to him.

The build-up to Dilrosun’s opener against Augsburg doesn’t hint at any kind of subtlety, and it may just be that the contrast is what makes his effort all the more enjoyable.

It’s like sitting through a tedious franchise film, all by-the-numbers stuff and nothing you haven’t seen before, only for a secondary character to catch you out with a perfectly-timed joke.

The gag doesn’t need to sync with the build-up, and indeed it works better if it’s uncharacteristic enough to catch you entirely off-guard, like Tom and Jerry breaking ranks from the usual battles to have a lengthy conversation about Foucault.

If you didn’t know something big was coming at the end of the clip of his goal, you wouldn’t even be alert to it, such is the nature of match highlights. Watching it in real-time, without the usual signifiers which come with fans present in the stands, you get the purity of genuine surprise.

In Dilrosun’s case, the script says he’s supposed to smash the ball in on the run when it breaks to him, hitting the back of the net with one of those blasted finishes satisfying in its movement of the Overton window on the concept of overkill (the Overkill window? Sure, let’s go with that).

Would such a finish look – and indeed feel and sound – better? Probably. But it’s not… well, it’s not this.

We absolutely love goals where a player dinks the ball over an incoming tackle before finishing, so shout-out to Javairo Dilrosun for this.

Felix Uduokhai, in the Augsburg defence, also recognises the optics belonging to a situation which plays out on football pitches at every level every week. By throwing his body on the line, he only blocks a certain type of shot but can leave with his head held high having given the universal sign of, ‘I did everything I could.’

And, in a way, Uduokhai did do everything possible, purely because Dilrosun’s next touch strays so far from what an attacking player ought to be doing in the circumstances. Still, just by avoiding the easy route to goal he is able to give us something much more easy on the eye.

The control to dink the ball over his opponent is that perfect blend of practice and instinct, where just one of the two would make this kind of thing impossible, but both in tandem produce an exponential beauty.

1 – This was Javairô Dilrosun’s first Bundesliga goal or assist for Hertha BSC that did not take place in September or October (5 goals, 5 assists). Variety. pic.twitter.com/O3SJkmcXRS

Each time you replay the goal, Dilrosun seems that bit more in control, both of the ball and of Uduokhai’s movements.

You get the impression that, if he didn’t need to put the ball in the back of the net, he’d have been tempted to stop and walk the defender back through the move. You can see him pausing on every freeze-frame, zooming in and asking, ‘Here, yes, right here – what was going through your head? What was the best thing you thought might happen?’

Indeed, arguably the least composed part of it all is the finish itself, as if Dilrosun has half a mind on preparing the inevitable celebration and almost loses his cool in the process. In fairness, when the first touch is almost a preemptive celebration in its own right, it’s tough to blame him.

It’s almost impossible to appreciate the whole act takes barely a second from start to finish, given the way Dilrosun slows down everything around him in the process of setting himself up for the finish.

With relegation no longer on the cards and European football still exceedingly unlikely, the resumption of the Bundesliga has felt like a victory lap without the victory for clubs like Hertha.

Still, thanks to Matheus Cunha in the earlier games and Javairo Dilrosun against Augsburg, at least they’re trying to get as many people involved as possible.