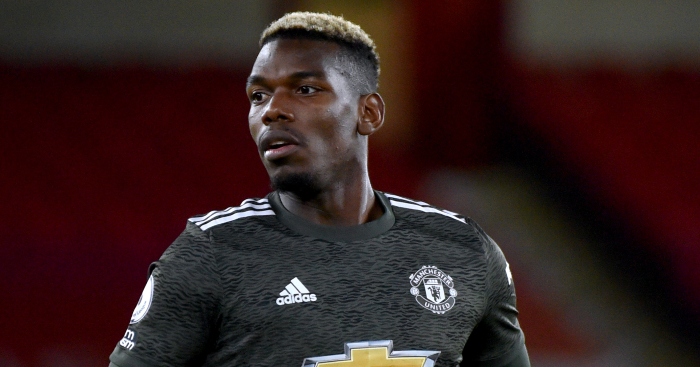 Questions often arise around Manchester United midfielder Paul Pogba, whether they regard the Frenchman’s future, his commitment to the club or even the level of quality shown.

Well, there have been plenty of those in recent times, which haven’t been aided by comments made by Mino Raiola saying that Pogba will leave Old Trafford next summer.

Pogba has seemingly had enough of the talking off the pitch and decided to make his statements on it at Bramall Lane, playing a key role as the Red Devils beat Sheffield United 3-2.

Making his eighth start of the season in all competitions, Pogba grabbed the game by the scruff of the neck and ensured Ole Gunnar Solskjaer’s side went ahead despite Dean Henderson’s early howler.

The 27-year-old pretty much achieved perfection with his assist for his compatriot Anthony Martial, getting enough weight on the pass to get it behind the Blades’ defence while not allowing it to fire through to Aaron Ramsdale.

It was suggested in the commentary that the midfielder may not have meant it. Call us idealists but we’re sitting back, enjoying the technique and thinking this played out exactly as Pogba thought it would.

After all, passes like this are Pogba’s bread and butter.

Paul Pogba has produced one of the assists of the season.#SHUMUN pic.twitter.com/mRys6v7cVq

Pogba wasn’t stopping there. The midfielder may not have registered an assist for the goal that turned out to be the winner, but that doesn’t make his contribution to it any less pleasing on the eye.

The poise shown in getting past Ethan Ampadu is brilliant, while the Frenchman then proceeds to get his head up and play the ball forward, launching the attack that ended in Marcus Rashford putting the ball in the back of the net.

Even so, the best part of this skill has to be how nonchalantly Pogba pulls it off, not looking as though he’s trying at all.

🌀 Let’s talk about that @PaulPogba performance 👇

These two moments both highlight the quality that Pogba possesses in abundance, while they also proved to be important in earning three points for United.

Knowing how things work, the talk around the Frenchman will likely continue as we enter the January transfer window and speculation comes up regarding any and every possible transfer move.

While Pogba may not be at Old Trafford for much longer, we hope that he continues doing his talking on the pitch with sublimity like this.