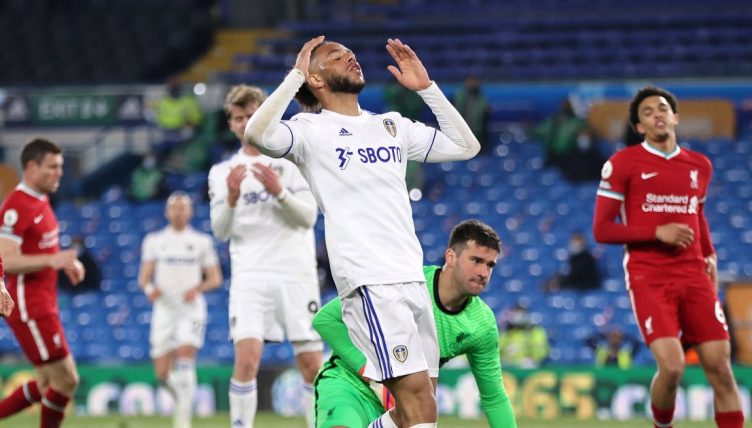 If you ever need a neat microcosm of Tyler Roberts’ Leeds United career, eight second-half minutes in the Peacocks’ 1-1 draw with Liverpool on Monday night provide all you need to know.

First, the sudden burst of beguiling talent. Collecting a pass from Stuart Dallas in the inside left position with Leeds trailing 1-0 in the 68th minute, Roberts held off Georginio Wijnaldum, span away from Trent Alexander-Arnold, and lined up Wijnaldum once more.

A feint in one direction, a stepover in the other, and Wijnaldum had disappeared. Up next came Fabinho; a neat inside pass for Jack Harrison to score did for the Reds’ No.3. In a matter of seconds, Roberts had taken England, Netherlands and Brazil internationals out of the game. Super League meet Super Leeds. Except Harrison didn’t score, finding Alisson’s outstretched boot rather than the bottom corner.

After the poise came the exasperation. In the 77th minute, substitute Ian Poveda repeated the routine down the right wing, picking out Roberts inside the area with his own clever square ball. Making the same mistake as Harrison, the Wales international shot with plenty of power but not enough accuracy, hitting Alisson in the chest.

Football has been cruel to Roberts recently. Harrison’s miss was compensated by Diego Llorente heading home the winger’s late corner, meaning he at least ended the night with a one in the assist column despite a zero for goals. Roberts, yet again, was left with a zero in both.

It continues a remarkable run of unfortunate luck for the attacker. Challenged by Marcelo Bielsa to prove he is worthy of a place in the XI regardless of injuries to other players, Roberts has seen a brush of Edouard Mendy’s fingertips nudge an audacious effort onto the bar against Chelsea; he has seen VAR deem his arm offside after chipping the ball onto Luke Ayling’s head to score against Fulham; facing Sheffield United, he played key roles in both Leeds’ goals, neither of which registered on that crucial fans’ barometer of assists, only to be rewarded by being spun in the air by a clattering challenge from Sam Baldock, who somehow escaped a red card amid VAR’s quest to ruin Roberts’ life.

In 1971, Don Revie enlisted fortune-teller Gypsy Rose Lee to rid Elland Road of a ‘curse’ placed upon the grounds on which it was built by travellers who were evicted from the site. If anyone at Leeds still has her number, it might be worth getting her to take a look at Roberts.

But there is a more serious undercurrent to the adversity the 22-year-old has faced up to this point. Upon joining Leeds as a highly-rated teenager from West Brom in January 2018, Roberts immediately fractured his shin in training, ruling him out for the rest of the season before he even had the chance to kick a ball for his new club. At the end of the following season, it was discovered Roberts had contracted an infection in his knee from the previous operation. He went under the knife three more times and was not told the problem could have ended his career until the most intense period of treatment was over.

Significantly, Roberts has also begun to publicly voice his opinion on the failure to combat racist abuse online, no doubt putting himself in the firing line in the process. “It’s not something you signed up for when you first started to play the sport,” he told the Premier League’s official website. “It’s very important to stand up for people that are suffering from this, because if you don’t speak about it and let it go, then it’s just going to keep happening.”

The interview was published on the day of Leeds’ clash with Liverpool, which was dedicated to the Premier League’s No Room For Racism campaign. Due to the actions of a cartel of “greedy bastards”, the campaign was given only the most obligatory of mentions throughout. To quote Roberts’ team-mate Patrick Bamford, speaking to Sky Sports after the draw: “It’s amazing the amount of uproar that comes into the game when somebody’s pockets are being hurt. It’s a shame it’s not like that with racism.”

🗣 "If you don't speak about it and let it go, then it's just going to keep happening"@LUFC's Tyler Roberts talks about fighting racism online#NoRoomForRacism pic.twitter.com/4Wqzhw6xA3

All is far from lost for Roberts, however. The lack of goals and assists belie the true nature of his performances in recent weeks for Leeds, which have gradually improved as he has got back into the groove of Bielsaball. Where he once looked an awkward option at No.10, he is becoming more in tune with the role, twisting and turning to find pockets of space and sharpening his vision to lay on chances for team-mates, even if he is still to find that killer touch in front of goal himself.

If Bielsa wanted Roberts to prove he can have a future at Elland Road, he has prompted a positive response from the player. Roberts is by no means the finished article, but do Leeds really need to roll the dice to find an alternative in a market that cost Sheffield United £23.5million to sign their own attacker who can’t score goals? Roberts, at almost a tenth of the cost and with plenty of room still to grow, is surely the wiser option. In the meantime, we wait for his deserved chance to flash that grin across our TV screens in celebration and remind us it’s a fine accomplishment he has got this far in the first place.

Football may not want Tyler Roberts to have fun, but that isn’t going to stop him trying.