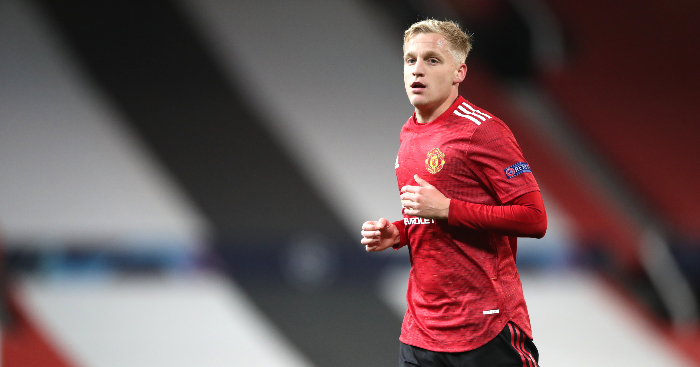 Time can make fools of us all in football. Manchester United‘s Donny van de Beek didn’t even need a week to prove the doubters wrong.

Ole Gunnar Solskjaer’s decision not to turn to new signing Van de Beek from the bench as United chased an equaliser in Saturday’s goalless draw with Chelsea prompted plenty of discussion in the press.

It perhaps didn’t help, with his choir boy face and the non-threatening aura of a mid-90s Neighbours love interest, that he just looked a bit glum watching the bore draw from the stands.

“I have nothing against the kid, but why did we buy Van de Beek?” ranted Patrice Evra from the Sky Sports studio post-match. “He’s watching the game from the stands every game because we don’t need him.”

Netherlands legend Marco van Basten then weighed in. “Is it about a five-year contract that he can sign? No, that’s bullsh*,” he told Ziggo Sport.

“Then you shouldn’t go to Manchester United, but wait with it or for another club. You have to want to play football every week, and such a club is then bad for your career.”

Solskjaer seemed to sigh in his pre-RB Leipzig press conference when fielding the inevitable questions over an issue that’s beginning to cause a stir back in the Netherlands.

The Norwegian rattled off the usual stock answer about time, patience, adapting to a new club and league. But he was calm and assured as he explained it – perhaps he’d seen ahead 48 hours to how Van de Beek would give a performance that said more than he ever could.

Named at the tip of a midfield diamond, the 23-year-old is unlikely to dominate the headlines after being withdrawn when the scoring was just 1-0, exiting the pitch before the late flurry of goals and Marcus Rashford’s remarkable hat-trick cameo, but he did nearly everything right.

Playing more minutes against last season’s Champions League semi-finalists Leipzig than he has across four brief substitute appearances in the Premier League to date, the Netherlands international looked eager to demonstrate what he can bring.

Do you want a crazy stat?

Fred covered 10,568m tonight which was more than anyone else. However, Donny van de Beek covered 10,060m in just 70 minutes!

But he offered more than simply energy and enthusiasm, bringing balance to the centre of the pitch as United produced their finest display of the season so far as Solskjaer got one over the most-hyped young manager in European football, Julian Nagelsmann.

He was switched-on enough to know when to push up and press and seemed like a natural, integrated member of the team rather than a peripheral figure still staking a claim.

With pressure to perform, he also looked incredibly composed when he received the ball in Leipzig’s half, resisting their aggressive press with his control, recycling possession when backed into tight spaces.

Best of all, he helped unlock Paul Pogba, for undoubtedly his best performance of the season so far, a constant threat and dominant figure in his favoured role on the left-hand side of midfield.

There’s been plenty of talk about Bruno Fernandes becoming United’s talisman, but the club-record signing, world champion and multiple Scudetto winner with Juventus remains the standard-bearer.

Van De Beek might not have been on the pitch for four of United’s five goals, but he helped set the tone, planting the seeds in turning a good night into a great one. 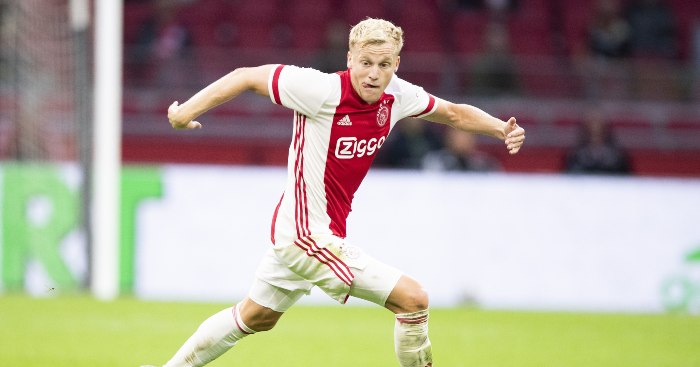 “He hasn’t had the opportunity to show it. He could be like what Thomas Muller is for Bayern Munich – the style.”

Two years ago, people were questioning why Jurgen Klopp sanctioned a £39million move for Fabinho if he wasn’t going to play him.

The Brazilian midfielder was made to bide his time before breaking into Liverpool’s best XI, but he soon became a key part of a side that won the Champions League and Premier League in successive years.

As things stand, we’re barely into the unique, relentlessly-congested 2020-21 season. It’s been less than a week and Evra and Van Basten have already been made to look a bit daft for their grand, sweeping statements, writing off his Old Trafford career after less than two months.

If only they’d had some patience, like Van de Beek himself. On this evidence, he has a lot to offer.