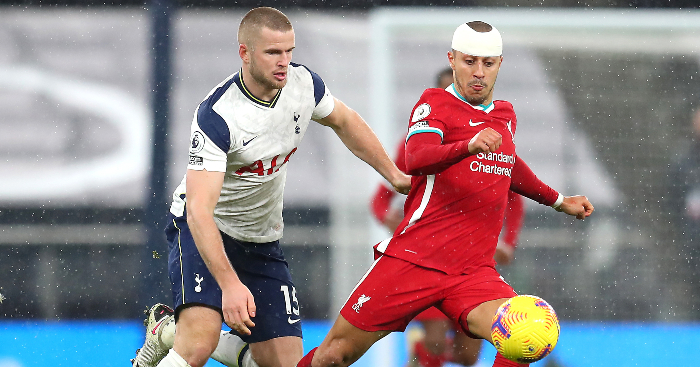 Thiago Alcantara can finally breathe a sigh of relief at Liverpool, who looked back to their best with the Spaniard pulling the strings in midfield in their 3-1 victory over Tottenham.

Having looked a Rolls Royce in the centre of the pitch as Bayern Munich won the treble last season, Thiago appeared the perfect addition to help Liverpool scale new heights after securing a first league title in 30 years.

Cast your mind back to mid-September when the 29-year-old made his debut, introduced at half-time at Stamford Bridge as the champions cruised to a 2-0 win over Chelsea.

Thiago played 74 passes in the second half, more than any Chelsea player over the whole match, as a new-look Liverpool enjyoed complete dominance.

Everything looked rosy for Liverpool then. They were yet to suffer their defensive injury nightmare, concede seven goals to Aston Villa, or begin 2021 by going four matches without scoring a goal in the league.

On that day, Thiago wouldn’t have expected a four-month wait to enjoy another Premier League win, which just so happened to come again in the capital against a so-called challenger to Liverpool’s crown.

We’d forgive Thiago for thinking he was cursed, unable to hit the ground running after testing positive for coronavirus before a late challenge from Richarlison in his full debut in the Merseyside derby left him sidelined for over two months.

By the time he returned, Liverpool were suffering their worst form in years, stunted by their lack of any senior fit centre-halves.

Thiago wasn’t on the losing side once in 2020, for both Bayern and Liverpool. Less than a month into the new year, he has started in defeats to Southampton, Burnley and Manchester United.

That probably wasn’t what he had in mind when he left the European champions in search of a new challenge. Some particularly reactionary pundits even suggested he was a vanity purchase.

But that’s not surprising in a reactionary media environment where Liverpool have followed Manchester City, Manchester United, Tottenham and Chelsea in oscillating between champions-elect and crisis club. Arsenal, meanwhile, have gone from relegation candidates to being on the right path under Mikel Arteta.

Inevitably making fools of anyone daft enough to question his status as a gamechanger, Thiago was front and centre as Liverpool produced one of their performances of the season against Tottenham, taking total control of the midfield in north London.

There will have been some nervousness after Joel Matip, Liverpool’s last remaining senior centre-half, was forced off injured at the break. But by taking the game by the scruff of the neck, the midfield kept the makeshift backline well-protected – Pierre Emile-Hojbjerg’s piledriver was the only shot the hosts attempted in the entire second half.

The heir to David Silva’s crown as the Premier League’s most low-key niggly player, Liverpool’s new number six isn’t afraid to stick a foot in if necessary. You won’t see such moments in Thiago’s dazzling passing compilations, but they’re there on the pitch.

The moment that best sums up that wonderful mix of tenacity and technical ability came 10 minutes into the second half. Having cut his head after clashing with Joe Rodon, Thiago disappeared down the tunnel, returning a few minutes later bandaged up.

Not to downplay the seriousness of head injuries, but there’s something undeniably aesthetically pleasing about a player taking to the pitch like Rambo.

But the Spain international is no midfield destroyer. Within seconds of his re-introduction, he demonstrated what a special player he is with the ball at his feet – or indeed, without it – like an action hero in a ballet.

First he took a couple of perfect touches to get the ball down and past Eric Dier before a perfectly weighted pass on the half-volley out to the left sent Sadio Mane on his way.

Charging into the box, Mane wonderfully dummied it as it was played back into Mohamed Salah, who provided the finishing touch by lashing the ball past Hugo Lloris.

Thiago’s involvement looks simple, but that’s the point: he makes everything look far, far too simple. Having only just emerged back out onto the pitch following a head injury, he had no right to.

For the first time in 2021, Liverpool’s front three were purring again, and so often it was Thiago finding them in dangerous spaces.

Roberto Firmino and Mane found themselves on the scoresheet, and while Salah was denied a place alongside them due to VAR spotting an infringement from Firmino in the build-up, there’s no denying what we saw in front of our eyes.

Football’s equivalent to the ‘if a tree falls in the forest’ philosophical thought experiment, Thiago’s role in Salah’s goal may not be officially recognised as having actually happened, like those annoying passages of play where you know someone’s offside but the linesman hasn’t flagged.

But we saw it, and we’re having it. It happened. There’s no telling us otherwise.