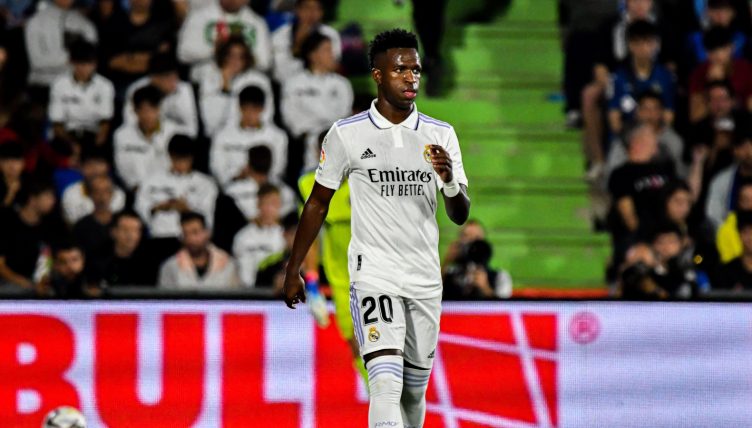 For a generation bought up on Soccer AM and FIFA Street, tricks have become an indelible part of the footballing experience.

Aided by the growth of social media, which packages moments of skill often missed in the past and increases their exposure, barely a week goes by without Twitter users needing a cold shower after some wizardry from one of the world’s best footballers.

It’s at this point we feel we must introduce Vinicius Junior to our conversation.

The Real Madrid and Brazil man has stealthily established a reputation as arguably the most exciting wide forward in world football, capable of destroying opponents with a flick of the ankle or a dignity-stealing nutmeg.

But Vinicius isn’t all sparkly touches; the 22-year-old scored 21 times – including the winner against Liverpool in the Champions League final – and provided 16 assists during his breakout season for Madrid.

And he’s begun the current campaign in equally imperious form. While most of the headlines surrounding Vinicius have been about his dancing and joyous defiance of the racists at last month’s Madrid derby, the forward has been showing opponents no mercy.

As Madrid travelled across the Spanish capital for Saturday’s derby against Getafe, Vinicius rolled up his metaphorical sleeves – Madrid is still lovely and warm, even in October – and set about capturing some tortured souls.

Carlo Ancelotti’s Spanish and European champions were already ahead through an Eder Militato strike before a subtle moment of brilliance from Vinicius.

While the Getafe defenders would have registered the danger as Vinicius received the ball just outside their penalty area, nobody was quite expecting a majestic sweeping cross with the outside of his foot.

His opponents stood rooted to the spot, jaws agape at what they’d just witnessed. Thousands inside the Coliseum Alfonso Perez were afflicted with the same condition.

Dani Carvajal was unable the divert the cross goalwards but the stage was already set for Vinicius to dominate proceedings throughout Madrid’s 1-0 victory; the Getafe defence spent the match chasing shadows in a forlorn attempt to regain their sense of autonomy that Vinicius had robbed them of.

That would have been sumptuous!!

Vinicius jr and Dani Carvajal came close to linking together to score a worldie… 💫#LaLigaTV pic.twitter.com/7yPUcQU1f2

Despite not getting on the scoresheet on Saturday, Vinicius’ near-unique blend of pace, dribbling ability and explosiveness caused Getafe’s backline all sorts of problems over the course of the 90 minutes.

As if aware of his own impotence, but unable to come to terms with it publically, Getafe’s Luis Milla gave a delightfully petty interview slamming Vinicius after the game.

“Vinicius’ intention was to get in everyone’s nerves, not to play football,” Milla told La Liga TV. He isn’t the first player that the Brazil international has driven to distraction with his immense talent this season. He won’t be the last either.

In this form, Vinicius has made himself undroppable at club level – he’s the only Madrid player to have played in every single match this season – and seems to produce more with every game.

And one swashbuckling cross, despite not producing a goal against Getafe, was further illustration of Vinicius’ status as world football’s biggest baller.

READ MORE: Ranking all of the 21 Brazilians to play for Real Madrid since 2000