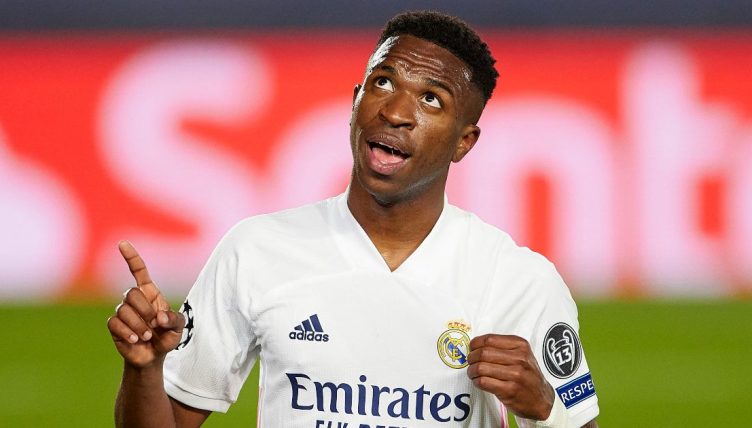 Quite why Liverpool weren’t pressing that space just in front of Real Madrid‘s defence is anyone’s guess.

It’s difficult to imagine that their crooked-smiled leader, the high priest of heavy metal football, had instructed them not to.

But it’s equally difficult to believe that these players, who have achieved so much over the past three years, were cowed by the situation, frightened by the prospect of facing 13-time European champions Real Madrid in the Spanish capital in the quarter-final of the Champions League.

Toni Kroos wasn’t worried about searching Liverpool souls for the explanation though. All he saw was an opportunity.

No press, a high line and one of the world’s fastest footballers – future Brazil star Vinicius Junior – waiting on the shoulder of a discombobulated Trent Alexander-Arnold. The German midfield controller needed no second invitation.

Twenty-six minutes gone, he dropped to pick up the ball from Eder Militao, found the space he knew he would, looked up and… ping. It was the most aesthetically pleasing of long passes, predictably so given whose boot it came from and the space and time he was afforded to make it.

The flight, the slight fade, the arc in the night sky above the Estadio Alfredo Di Stefano. After Alexander-Arnold and Nathaniel Phillips had watched it sail demoralisingly just over their heads, it fell not onto a postage stamp but onto the Madrid badge on the chest of Vinicius.

The 20-year-old’s touch was perfect, taking it behind Phillips and across his compatriot Alisson in the Liverpool goal. Then came the shot, back into the corner that Vinicius’ movement had taken Alisson away from.

One-nil Madrid, a goal so simple and so avoidable from Jurgen Klopp’s perspective yet so thrilling to watch from Zinedine Zidane’s.

And more than a perfect ball over the top, Kroos had provided a physical metaphor, a passing of the proverbial torch from one Madrid supergroup to the next.

Rhythm guitarist Kroos and pianist Luka Modric are 31 and 35. Lead singer Karim Benzema is 33. Backing vocalist Nacho is 31. Nutty drummer Sergio Ramos is 35 and triangle soloist Marcelo is 32. Even bassist Casemiro will be 30 before long.

This Madrid band has been as successful as almost any that has come before them, producing hit after hit. Four European Cups, two La Liga titles, a Copa del Rey, four Club World Cups. But they’re running out of road.

Madrid will need a refresh at some point soon, and the pass and faultless finish was a sign Kroos and co are getting ready for the Vinicius-led emergence of a new g-g-g-generation.

It is an emergence the Madrid hierarchy, to their credit, have planned for. Over the past five years they have looked across the world, and particularly to South America, for the best teenage kickers of a football.

Some big transfer fees have been paid – Vinicius and his young compatriots Rodrygo and Reinier all arrived aged just 18 and cost a combined €130million – and there was an inevitable risk that the gamble wouldn’t pay off.

And of course, not all of them are there yet. Some are still out on loan, others mostly watch from the wings. It is entirely possible not all of them will make the grade.

Yet Vincius taking the initiative in the way he did, scoring Madrid’s first and third in the biggest game of the season so far, is perhaps an early signal that some of this new crop of talent are positioning themselves to take the weight of Madrid’s history upon their still-narrow shoulders.

Plenty of people have tried to put Vinicius down, even his team-mates. He has been maligned on social media and in the papers for his wastefulness and poor decision making.

But the kids look like they’re coming, and it seems they’re alright.