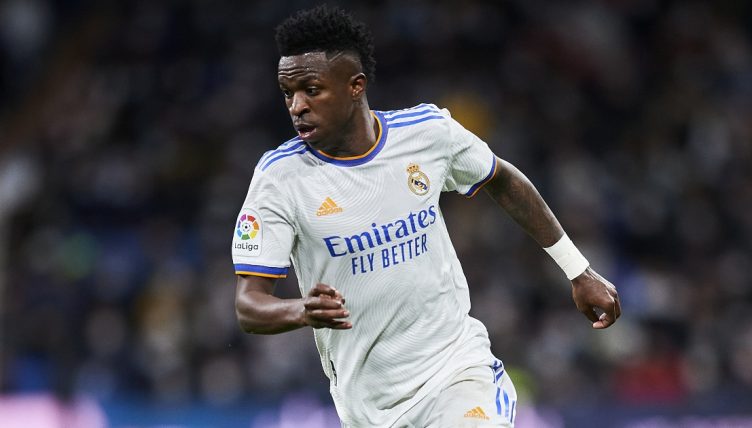 With 17 goals and 10 assists this season, he’s finally convinced his team-mates of the brilliant potential he’s long possessed.

And through it all – through the doubts and the over-analysis and the unwarranted abuse – he’s kept his chin up and a smile on his face, his great dignity putting his detractors to shame.

But if you look at Vinicius Jr’s pleasantness and assume it indicates some sort of fragility, then you’re making a hell of an error.

On Monday night, Real Madrid travelled to Palma, the capital of the Balearic islands, to take on RCD Mallorca. With second-place Sevilla having drawn on Sunday, it was the perfect opportunity. A win would open a 10-point lead at the top of the table and all but seal the La Liga title in mid-March.

But easy it was not. Mallorca are fighting for their lives at the other end of the table and Madrid were coming off the back of their emotionally exhausting triumph over Paris Saint-Germain. This was the sort of banana skin that title charges can slip up on.

And in the first half, Mallorca frustrated their more illustrious visitors, both on the ball and off it. There were presentable chances for the home side, one for Vedat Muriqi after 10 minutes and an even better one for Maffeo after half an hour.

Mallorca got stuck into Madrid too, especially into their goal-getting Brazilian winger. Just before that glorious chance, Maffeo had gone in hard on Vinicius. Too hard. Studs up, absolutely flying.

But Maffeo got away with it, without even a yellow.

Vinicius was furious and went head-to-head with Maffeo’s mate Angel Rodriguez, earning both of them a yellow. But if Rodriguez and Maffeo thought they might have intimidated Vinicius into giving up, they had another thing coming.

Vinicius is not one to get his revenge in Roy Keane’s red hot, studs-up style. Vini knows revenge is best-served ice cold. And serve it he did, as soon as he got the chance.

Fifteen minutes after the melee, when he’d cooled down and regained his composure, Vinicius got the ball at his feet on the left wing with Maffeo right behind him.

He feinted to go inside, but then knocked it past Maffeo and accelerated towards the box, the Mallorca full-back in pursuit. When he got into the area, Maffeo was catching up.

But then the cutback came in flash. Vinicius changed direction as quickly as he’d set off and Maffeo was gone.

He slid past Vinicius with the grace of your uncle on a waterslide, body twisted, desperately attempting to stop himself before he slipped all the way out of the stadium, down the street and into the Mediterranean.

Without touching Maffeo, Vinicius had put in an ankle-breaker even more brutal and far more beautiful than the one Maffeo had attempted on him. It came to nothing, and the half-time whistle soon followed with the score still 0-0. But the tone for the rest of the match had been set.

As the players walked off of half-time, however, something far uglier even than Maffeo’s challenge was reportedly directed at Vinicius – racist abuse from the stands. It is not the first time this season. Unfortunately, it probably won’t be the last.

But again, if they were trying to intimidate the young Brazilian into yielding, they had another thing coming.

Ten minutes into the second period, Fede Valverde nicked the ball from Iddrisu Baba and played it to Karim Benzema, who fed Vinicius to his left.

No second invitation was needed. Vinicius took one touch, had a little look up and slid it right between Sergio Rico’s legs: a nutmeg goal to crush Mallorca’s soul.

The Brazilian superstar combines with Karim Benzema to take full advantage of the Mallorca mistake ⚪ pic.twitter.com/svm1v911MD

The goal was the exclamation mark on his reply to the players who had tried to stop him with violence.

Then came Vinicius’ delightful response to the boneheads in the stands.

As he made his way back to his own half, he stopped for a second, looked around and decided it was time.

The dance was unleashed. The funky carioca was bailando on Mallorca’s bruised bodies, sambando on their stupidity. And as the Mallorca fans reacted with spitting ire, Vinicius just smiled.

Was that the end of the humiliation for the island side? Not quite.

With 15 minutes left, Vinicius burst into the box and, as Benzema was about to put the ball on his toe, Brian Olivan cynically shoved him in the back. The referee pointed to the spot and Benzema dispatched the kick.

The great French forward added another before the end from a Marcelo cross. Vinicius was not invovled. But he didn’t need to be. By then, his work was done.

He had been kicked and abused, but there was never any chance he was going to back down.

But fuck with him and you’ll get what’s coming.