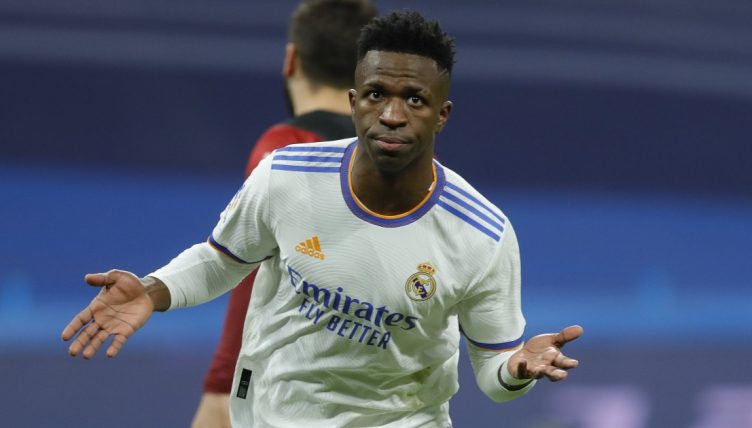 Six months ago, Real Madrid’s Vinicius was very much still Junior. In the summer of 2021, he was coming off the back of a season in which he’d scored three goals and got three assists in 35 games.

He was included in the Brazil squad for the Copa America, but the fact he made just two substitute appearances in Brazil’s seven games suggested he might not have been had that squad been limited to the usual 23 players.

Vinicius was a talent, but a talent that had not been realised. Yet, as you may have noted, we are currently discussing all that very much in the past tense.

On Saturday, as Real Madrid played Valencia in a clash they needed to win to regain their La Liga momentum, Vinicius kissed the Madrid badge – a badge he respects deeply – twice, marking his 13th and 14th goals of the season just a couple of weeks after Christmas.

The first of his two on the night epitomised how far he has come in the last six months, summed up the transformation from lanky, flailing teenager who was often about as threatening as a newborn giraffe to a man as lethal as Agent 47 and the most valuable player in world football.

Just before the break, Madrid had already taken the lead through Vinicius’ equally brutal attacking partner Karim Benzema, who converted from the penalty spot after Casemiro was felled.

And it could have been two had Luka Modric kept his shot just two inches lower after a delightfully weighted pass from Vinicius earlier in the half.

No matter. Vinicius himself made sure the lead was a comfortably cushioned one shortly after the two teams had emerged from the interval. And the way he did so spoke to rivers of confidence gushing around his feet.

He got the ball on the left, 10 yards in from the touchline and 15 yards away from the penalty area. It is the exact area from which Thierry Henry used to wreak such havoc at Highbury in the early noughties.

His sights set, he darted straight for the area, the Valencia defenders visibly trembling in their fluorescent football boots. This time, rather than skin the lot of them, Vinicius decided he’d have more fun playing a one-two with Benzema.

When he got it back, there were two opponents directly ahead of him. It was impossible to control it perfectly, but Vinicius did the next best thing, poking around one side of the two players and running around the other before selling Jasper Cillesen a dummy and slotting calmly into the back of the net.

Brilliant from the young Brazilian as he nets his 11th goal of the season 👏 pic.twitter.com/ONi2DrydmO

There were plenty on social media who were more than willing to shout, ‘Well, he didn’t exactly mean that dribble, did he?’

To which, all we can say is maybe not, but if he scored a goal this good by accident, imagine what he’ll do when he’s trying.

The closing stages of the Champions League are coming, and Europe’s elite should be afraid.

By the end, Vinicius had scored another, tapping in a deflected shot, and Benzema had completed a 4-1 rout with a terrific goal on the turn. After the demoralising defeat to Getafe in the previous game, it was the fillip Madrid needed to get their title charge back on track.

Vinicius was the driving force behind the victory and is, without question, now one of Real Madrid’s leaders; a junior who’s quickly become a senior and a player who alone is worth €55million more than the reported €111million Los Blancos paid for him, Rodrygo and Reinier combined.

Madrid placed their eggs in the Brazilian youth basket, and – even with Rodrygo still finding his feet and Reinier disappeared in Dortmund – it seems that gamble is paying off.

Since his arrival, Vinicius has been an absolute magnet for criticism from the notoriously cantankerous Spanish sports media. We can all have a fairly good guess at why.

After his latest goal on Saturday, all that they could muster, according to La Liga TV presenter Phil Kitromiledes, was a bizarre condemnation of his celebration. Apparently dancing is not allowed at the Bernabeu.

If that’s all the Madrid punditocracy can muster, Vinicius is doing his job to perfection.