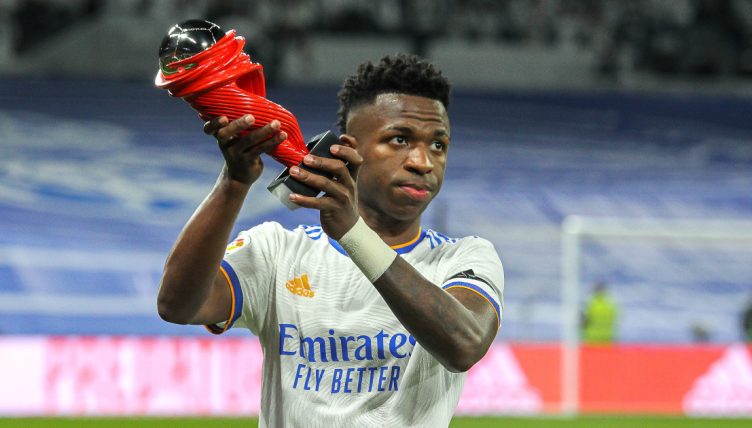 Real Madrid have been on fire this season, winning their last 10 games in a row as Carlo Ancelotti looks to steal the league title back from their noisy neighbours.

Los Blancos took a huge step towards this on Sunday night, as they defeated the champions 2-0 in a fiery encounter at the Santiago Bernabeu, with stunning goals from Karim Benzema and Marco Asensio.

Despite not scoring, there was still one player that really stood out to the crowd: Vinicius Junior. Whilst Luka Modric and Toni Kroos were instrumental in the middle of the park, it was the 21-year-old who provided the creative spark that was often lacking last season.

The Brazil international has been going from strength to strength this season, scoring 12 and assisting nine in 23 appearances in all competitions, and he has formed arguably the best-attacking duo in the world alongside Benzema.

It was this duo that combined again to open the scoring against Atletico, with Vinicius picking up the ball on the right hand side and floating in the perfect cross for Benzema to smack on the volley with sheer power to beat Jan Oblak in goal.

He was a doubt for El Derbi but not only is Karim Benzema fit to start, but he's scoring STUNNING volleys too! 🔥

The two forwards have become a partnership not too dissimilar from the one Benzema had with a certain Cristiano Ronaldo over the years, always in sync with each other and destroying teams with their great chemistry.

Just over a year ago, this seemed like it would be impossible. Vinicius was playing so poorly to the extent that Benzema was caught moaning about his team-mate at halftime, even encouraging his other team-mates not to pass him the ball as he was “playing against us.”

Maybe this was the motivation the youngster needed, as his recent explosion has seen him become one of the most lethal goalscorers in Europe hardly 12 months later.

Karim Benzema To Ferland Mendy in the Tunnel at Half-Time :

"He [Vinicius] does what he wants. Don't play him on My Mother's Life. He's Playing Against Us." 😬

Vini Jr was standing just there but they communicated in French so he wouldn't understand. 😳 pic.twitter.com/JNS1De9jd2

Even without the goals, his general play has gone up a level. Vinicius has brought the skill, pace and trickery often associated with superstar ‘Galactico’ signings seen over the years at the Bernabeu, and has cherished the responsibility he has at one of the biggest clubs in the world.

Vinicius terrorised the Atletico defence throughout the derby, often leaving the opposition on the ground wondering how they got there and helped seal the win by assisting Asensio for the second goal following a stunning counterattack.

This highlights how he is more than just goals and pace, as he showed incredible vision and composure to slide the ball through to Asensio across the box, allowing the Spaniard to finish.

Asensio doubles Madrid's lead, feels like a long way back for Atlético now!

Second assist of the game for Vini Jr. too 🤌 pic.twitter.com/f9KHATOhfF

The Brazillian’s trickery then came out in style, as Vinicius decided there was no room for prisoners in this heated rivalry, rubbing salt into the wounds of the Atletico defenders by twisting them in and out until they simply could not take any more.

When Eden Hazard arrived for £100million in 2019, it was expected that he would be a guaranteed starter on the left wing, and would bring the goals, skills and creativity that he showed during his eight years at Chelsea.

Two years later, Hazard has been injured, out of form and now warms the bench, watching Vinicius play with the same arrogance and skill as the Belgian used to.

The Bernabeu faithful have all but given up on Hazard, and with Vinicius playing like this, they will hardly even notice. After receiving a lot of criticism as a teenager, he is finally getting recognition and even received a standing ovation after his performance in the derby.

Manager Carlo Ancelotti also praised his young superstar, highlighting the efficiency in his performance but still indicating that there is still room for growth and maturity.

“He is improving himself. I haven’t spoken about him a lot because I don’t have much to say,” Ancelotti said.

“He has to do something to help the team. Today he didn’t get the better of Marcos Llorente, but he provided two assists that helped us win the game.”

Vinicius himself remained humble, stating that his primary objective is to help the team over scoring himself.

“I’m happy about my two assists, I want to help Karim score a lot of goals and help the team win tough games like this one,” Vinicius said.

“I’m happy to be playing like this but what happened to me is normal, I got here when I was 18 years old. It’s a bit tough to sign for the world’s best club with the best players. Now I want to keep it going.”

His performance against tough opponents in Atletico Madrid showed how much his game has evolved. Despite only completing one dribble, he was still the team’s top creator and proved to be the difference maker, choosing to pick out passes that led to goals rather than going for goal himself.

It is this evolution of maturity that makes him the best youngster in Europe. While others in his age group may also possess the talent and technique of the Brazillian, they may not play with the same confidence, composure and intelligence as Vinicius does in such important games.

This is a player with the world at his feet, and he has plenty of time to write himself into Real Madrid folklore.