We are delighted to announce Erik Lamela has completed the NLD 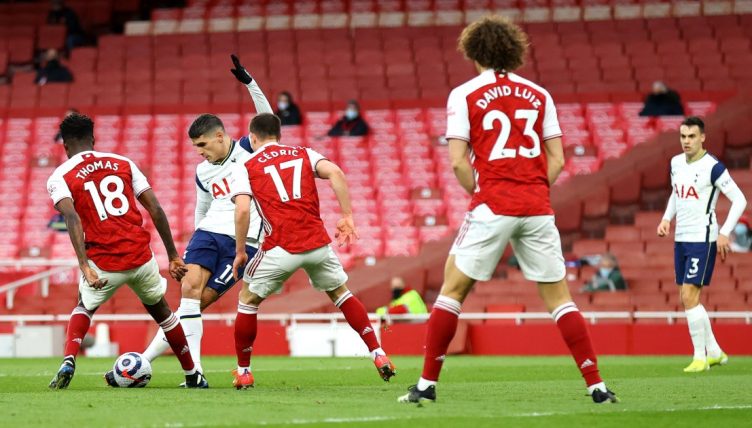 It is comforting to know that during such uncertain times, Tottenham and Arsenal remain committed to their status as two of England’s most reliably unreliable clubs.

Without the demands of fans inside stadiums, games between the Premier League’s ‘big six’ have too often drifted into bleak stasis this season. Thankfully, the new normal is very much the old normal when the north London derby rolls around: chaos, calamity and, let’s face it, a large dose of banter.

It was only fitting that the game was played against the backdrop of those dreaded Thursday-night Europa League fixtures. Jose Mourinho brought his team to the Emirates riding a wave of attacking enthusiasm, loading his XI with an eye-catching amount of offensive-minded players only to promptly revert to one of the most demoralisingly cautious examples of Mourinhoball. Consider us well and truly punk’d, Jose.

Mikel Arteta, meanwhile, doubled down on his Lego headmaster vibe by dropping his captain and top goalscorer Pierre-Emerick Aubameyang for turning up late. The late switch clearly didn’t affect the young attacking midfield trio of Bukayo Saka, Martin Odegaard and Emile Smith Rowe, who relished the opportunities presented to them by Mourinho’s meekness in approach.

After 16 minutes, Smith Rowe hit the bar with a brilliant effort from the edge of the area, and it seemed only a matter of time before the hosts took a deserved lead. But this fixture has rarely followed a script, and Spurs were as surprised as anybody to score a goal – not least Sergio Reguilon, who couldn’t quite believe his eyes when Erik Lamela calmly produced one of the cheekiest efforts in the derby’s history.

Lamela’s role in Harry Kane’s midweek opener against Dinamo Zagreb prompted plenty of social media hilarity at the winger’s sheer determination not to use his right foot. But the Argentina international wasn’t joking, taking his skillset to its logical conclusion by placing a rabona through the legs of Thomas Partey and into the bottom corner of Bernd Leno’s goal.

The goal married the delicate poise of Lamela’s finish with elite efficiency: if you want me to score, this is the easiest way for me to do so. Shove that up yer bollocks, xG.

Érik Lamela with the Rabona in the North London Derby…

Given Lamela’s commendable commitment to being a shithouse, it’s easy to say he’s the perfect player to suit his manager. But the winger is emblematic of the conflicted, modern-day Mourinho in another sense, too. Eight seasons and 250 games into his Spurs career, an attacker capable of such moments of brilliance has never scored more than five goals in a single Premier League campaign. Much like the 2021 iteration of Mourinho, it’s a struggle to definitively conclude whether he’s actually any good or not.

Lamela had entered the fray as a 19th-minute substitute for the injured Son Heung-min. By the time the winger scored the opener in the 33rd minute, he had already given Granit Xhaka and David Luiz little kicks off the ball.

When Arsenal took the lead in the second half through Alexandre Lacazette’s penalty, after Odegaard’s deflected shot restored parity shortly before the break, it was only a matter of time before Lamela completed a derby day full house.

Despite avoiding punishment for his clashes with Xhaka and Luiz, he was booked in the 69th minute for a lunge on Partey and gave away another foul before receiving a second yellow card seven minutes later for catching Kieran Tierney in the face with a stray arm. The “I’ve had enough” expression on Michael Oliver’s face left little room for complaint.

The reaction on social media was generally one of admiration. At a time when football can say often feel soulless and drab, Lamela rose to the occasion and did everything in his power to ensure one of English football’s tastiest fixtures was as spicey as possible.

March 14, 2021, will go down in north London derby folklore. From here on out, we will view the fixture through a prism of Before Lamela and After Lamela.