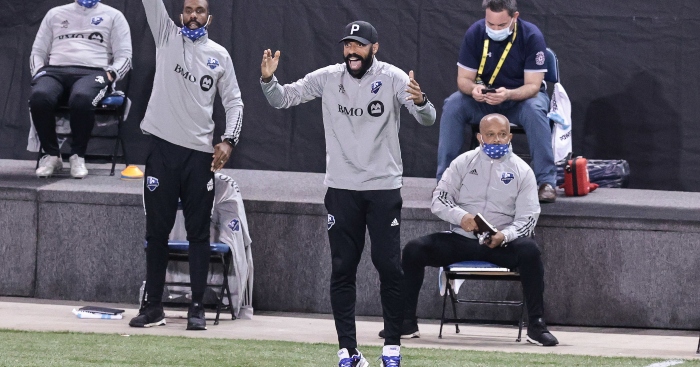 It must be frustrating being a genius.

While some are blessed with era-defining skill, the frustration of communicating this to mere mortals is unquestionably a downside to this blessing.

This sensation is illustrated when elite footballers transition into coaching. The story of Glenn Hoddle telling David Beckham and Paul Scholes, “You’re obviously not good enough to do that one. We’ll have to leave it out,” during his time as England manager has passed into legend.

It would seem as if Thierry Henry is experiencing a similar problem. His time at Monaco, where his attempts at motivating his players translated into passive-aggressive sarcasm, was unsurprisingly short-lived.

Not to be deterred, the former Arsenal and France legend moved to MLS side Montreal Impact in 2019. His spell in Canada had slipped relatively under the radar until somebody had the brainwave to mic Henry up on the touchline.

The results were spectacular. Dressed in loose-fitting sportswear that suggested he had come to the match after helping a relative move house and sporting an impressive beard, Henry unleashed a volley of instructions at his players that channelled Graham Taylor’s iconic performance in The Impossible Job.

Can we get a mic check on coach Thierry Henry? 🎤 pic.twitter.com/gE0hLVHW6X

Things got more surreal from there. “Can you pass it one touch?…”Then why don’t you do it?” Old habits clearly die hard.

At one point, Henry bellowed “Masooon” in the same tone of a schoolmaster expressing dismay at his pupil’s choice of soup spoon. It was here that we started to feel sympathy for the players who have to work every day under this perfectionist.

Especially Mason Toye, whose name cropped up on numerous occasions. Romell Quioto, or “Romeeeeeelll!!!”, came in for much the same treatment

Keen to spice things up, the lament, “One, two not one, two, three,” was accompanied by some thrusting arm movements. His coaches, seated behind him, looked on with a certain world-weariness.

Our own personal highlight was the moment Henry screamed “JAMES”, bringing to mind those old Fenton clips from 2012.

We’re not doubting that football management must be one of the singular most pressurising jobs around. Sure, lives do not depend on your actions – but try telling that to the armies of social media warriors.

Meanwhile, your livelihood directly depends on the actions of others; no amount of coaching can compensate for the lack of control at crucial moments.

Yet there was something hilarious about watching Henry try and comprehend the limitations of his charges. Netflix, you know what to do. Commission this man a series.